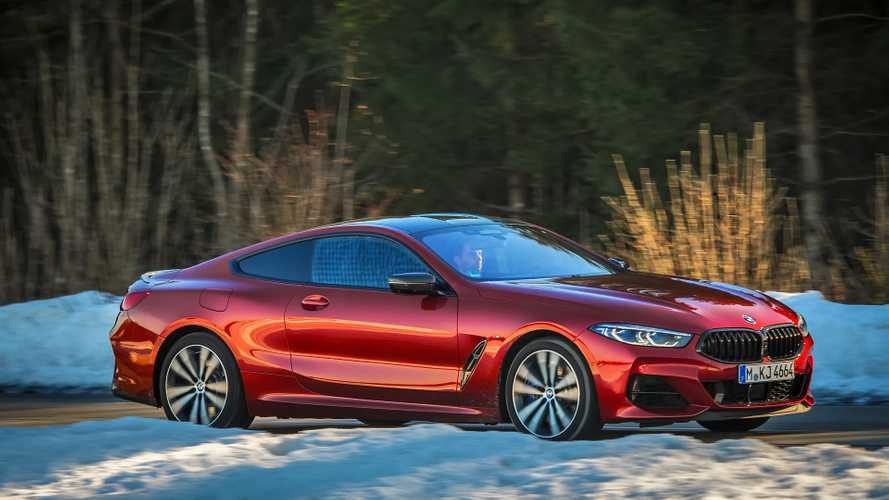 Nothing in this class rides better, but the M850i has an identity problem.

Editor’s Note: While Motor1.com here in the U.S. eagerly awaits a crack at the new BMW 8-Series (it’s happening in May, kiddos, be ready), our partners in Germany recently spent two weeks with the big coupe. Read on for their impressions.

Well, if it isn't the new BMW M850i xDrive on a winter country road?

Phew, Motor1.com finally has its hands on the 2019 BMW M850i xDrive, Munich’s new flagship coupe, and not just for a few hours on a sunny beach promenade somewhere in Portugal, but for two informative weeks in Germany’s glorious February air. Even a 530-horsepower V8 luxury coupe can't cheat here. We say coupe and not sports car for a few reasons, chief among them are the revived 8-Series’ measurements. Its 16 feet long and weighs just under 4,400 pounds. It’s a big boy, and there’s a big engine because of it, a 4.4-liter, twin-turbocharged V8, all-wheel drive, and face-pulling acceleration. In the cabin, opulent leather upholstery, comfy seats, plenty of screen real estate, and optional carbon-fiber everything.

Sounds like the epitome of an opulent GT car…

We’ve barely gotten started. This summer the M8 follows with over 600 hp for faster, louder, sportier, and dynamic performance. After a tête-à-tête with the M850i, the only serious question we have about the upcoming M8 is what we’re supposed to do with it, because the M850i is plenty. This M-lite model manages to eradicate the greatest weakness of the "normal" 8 series and to breathe the special must-have feeling into BMW’s big new coupe.

Wow, what does that mean?

The BMW had us hopelessly enamored. During our two weeks of seat time, we fell in love with the how the 8-Series drives, how it operates, how it radiates absolute technical perfection. It’s incredibly effortless, dynamic yet captivating, and frighteningly fast. That's probably why we find it so annoying how BMW positioned this car. Or more correctly, how it didn't.

You see, the new 8-Series is supposed to be Munich’s ultimate flagship. It has to be so good, so charismatic and desirable that it can overcome the handicap of two rolling radiator grilles on the nose. BMW has decided to position the 8-Series one class higher than the 6-Series. Fill up the M850i and it’s a 150,000 Euro (it starts at $111,900 here in the U.S.) car. The expectations are immense, as BMW attempts to make a huge leap forward over the discontinued 6-Series coupe and convertible. The 8-Series needs to be a temple of luxury, where manufacturing quality is found in every carpet fiber. But that's not how it is.

Step into the 8er and despite its Alcantara roof lining, ambient lighting, or a silly glass gear knob – this is a new BMW trend started by the X5 – it doesn’t feel much different than a very well equipped 3-Series. The workmanship is impeccable, but the interior design is terribly sober and simple. Things like plastic ventilation and steering wheel knobs would be unthinkable on a Mercedes-Benz S-Class Coupe or a Bentley Continental GT, two cars the 8-Series now has to compete with.

But not everyone will be disturbed by a lack of pomp

That is absolutely correct. Nevertheless, we believe that people who spend well over 100,000 Euros on a car as impractical as a big grand tourer expect a certain glamour factor, and the 8 Series simply doesn’t offer that, although its expressive exterior style helps. The M850i doesn't have the prestige of an (admittedly much more expensive) Aston Martin DB11, but 95 percent of the many people that will gawk at it will do so with open-mouthed admiration.

And with that we’ll end our tirade, because in every other area, this new big BMW two-door is quite a revelation.

Is it as agile as BMW claims?

Yes. Of course, you should always keep in mind that the 8-Series is primarily two tons of comfortable, mileage-eating machine. It’s a GT in the best sense, not a Porsche 911. But among its peers, the new 8-Series certainly has the most dynamic driving personality.

The chassis balance and design of the four-wheel drive roughly correspond to the ideal picture for a large sporty coupé.

The super-light steering in normal mode is almost too direct and agile when turning in, thanks in part to the rear wheel steering (something our American colleagues complained about in their first drive of the new X5). This allows the engineers to make the car feel much smaller and lighter than it really is. But that means having to put up with a little nervousness.

The M850i doesn't rely on this "cheap trick" at all, though, which is wonderful. It doesn't just suggest a pointed, excitable handling character, it really has it. The faster and more aggressive you push it, the better and more engaging it feels.

The chassis balance and the design of the four-wheel drive system – apart from BMW’s rubbery, unfeeling steering – roughly correspond to the ideal picture for a large sporty coupe. The grip level of the xDrive system is breathtaking up to the limit. Even on very wet and cold asphalt (Editor’s Note: Motor1.com Germany’s M850i had snow tires, as required by German law) it’s absolutely amazing how much traction the 8-Series builds up.

The nice thing is that, despite its neutrality, the car doesn't seem clumsy. Approach curves more briskly, and the rear’s behavior is discreet but perceptible. In Sport Plus mode, it’s somewhat more natural than in the standard setting. A little more throttle, and the car slides slightly over the rear axle. The 8-Series also twitches its butt when braking brashly before the bend. Despite its all-wheel-drive system, the M850i feels clearly rear driven when challenged.

Through all its security, the 8-Series always brought a grin to our face. This car, more than a Mercedes-AMG S63 Coupe or Bentley Continental GT, will convince people who like to drive a really sporty car that grand tourers can be fun.

And what about the people who are simply looking for a large, fast travel coupé?

Well, BMW primarily developed this car for them. The fact that despite its body size, it’s so cheerful and full of zeal as it rushes through curves is a welcome bonus.

In other words, the M850i throws its occupants into a state of calm, relaxation, and comfort during normal driving. Suspension comfort and noise level are excellent in Comfort mode, while the eight-speed automatic transmission has a delicate but perceptive finesse. In addition, the excellent seats have a perfect seating position and an infotainment control that, despite all the complexity present in the latest version of iDrive, is child's play and extremely logical. The fact that BMW still has the choice of touching, pressing the iDrive wheel, flailing gestures or speaking is a big advantage. Not really fitting into this excellent picture is the wasted space on BMW’s new digital instrument display, which is hard to read and offers no features worth mentioning. Analog instruments would be just as useful, which is the harshest praise we can muster against a digital cluster.

Meanwhile, the V8 does what good eight-cylinder engines do. Gently but surely, it gets the 8-Series rolling, and when you need it, it goes into battle roaring. Stand on the gas pedal and the M850i takes a very short breath, then makes everything in the rearview mirror disappear. There's really no other way to say it – there are certainly more charismatic V8 engines, but the force of this twin-turbocharged 4.4-liter in every situation is impressive. In addition, BMW seems to have made some improvements to the aforementioned battle roar. The car never pushes itself acoustically into the foreground but sounds pleasantly eight-cylinder.

It's quite an ideal condition, and we’re almost surprised why there are other driving modes beyond Comfort. Sport Plus, in particular, destroys the majesty of the 850 to some extent. Not because of the somewhat tighter chassis, the heavier steering, or the more aggressive character, but above all because the exhaust starts to crack and popple and bang. It’s enough to make any driver over 21 sink into the ground with shame.

What do we do now with the M850i xDrive?

That's a good question. We’re as split as ever. This big, expensive sports coupe is so sober, so functional, so focused on being a great BMW that it has completely forgotten to be a great luxury car. In order to justify such a price tag, a car in this class needs a certain flamboyance and charisma. But we can't imagine anyone sitting in this car and being immediately blown away. It needs more pomp, more vanity. It needs to make its driver feel as impressed as the people giving it slack-jawed stares on the street. If BMW can figure out how to combine that character with the M850i’s impressive driving dynamics, everyday usability, and technical superiority, it’ll have a certain winner. As it stands, the M850i is probably the best car in its segment. The only question is whether this segment will accept a car like the M850i.