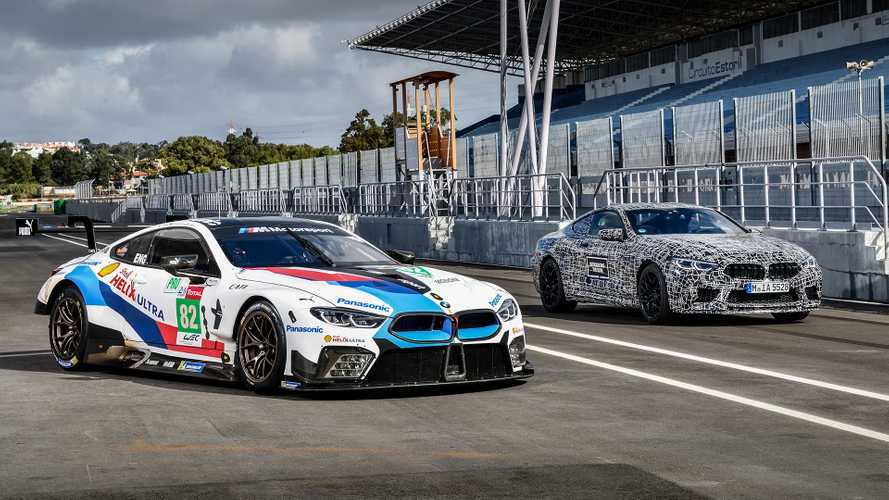 The production car has a loud bark, but the racecar is prone to bite.

My first introduction to the BMW M8 GTE race car comes with a nerve-racking procedure called an extraction test. It goes something like this: as a stopwatch-clutching guy cues me, I kill the engine, pop off the safety netting, rip out the helmet’s communications cable, release my six-point harness without hampering the HANS device, and jump out of the (hypothetically burning) vehicle. If I can pull off the sequence in less than seven seconds, I’m deemed worthy of track-testing the car.

The disturbingly named drill is harder than it sounds because the car’s steel cage makes egress about as easy as crawling through a rat hole. It’s also a sobering way to drive home the brutal and potentially destructive power of the latest BMW factory effort racer.

Though the BMW M8 GTE actually bears few things – beyond its basic silhouette – in common with the production-spec BMW M8 that hits showrooms later next year, the heavily scooped and spoilered racer speaks volumes to the Bavarian brand’s priorities these days. For starters, it’s the first time BMW has ever unleashed the race car into competition before the road-going version hits the streets.

The Estoril circuit is damp from a light shower. But, after BMW’s race director deems it okay to drive with rain tires, the ritual begins. Helmet and racing suit donned, I slink into the race car and get strapped in by the pit crew. Reach-arounds are a tad awkward but entirely necessary since my peripheral vision is restricted by my Stilo helmet. Once plugged and strapped into the M8 GTE’s somewhat claustrophobic confines, the crew removes the tire warmers and the car is pushed into the pit lane on “skates” – free-rolling, caster-wheeled pods that enable the race car to be maneuvered around tight confines before being lowered onto the tarmac.

Piloting a GTE racecar isn’t as simple as hopping in and twisting the key.

Piloting a GTE racecar isn’t as simple as hopping in and twisting the key.

First, you activate the master power via a toggle on the central pod housing the switch panel. You should always assume the car is in gear, so you look to the small TFT display confirming the sequential gearbox is in neutral; it’s not a bad idea to press the physical clutch in as well, just to be sure.

Hold the “Start” toggle for around five seconds and a fast-spinning starter whirs before the V8 fires up with a shockingly loud bellow. Depress the clutch, which requires a firm shove, and yank the small carbon-fiber shift paddle on the left toward you, and the transmission snaps into first gear. Slowly release the clutch while feeding 50 to 60 percent throttle, and the car eases forward. Don’t worry about burning out the clutch: it’s a stout carbon-fiber unit that probably costs as much as your first car. You’ll want to slip it until about 35 mph because first gear is relatively tall. While some race cars use a short first intended only for pit exit and entry, the M8 GTE’s long ratio will actually come in handy at turn 8, a tight chicane that jukes into an increasing radius right-hander.

Although I was provided some acclimatization laps in an older M4 GT4 car, the M8 GTE proves to be an entirely different beast from the get-go. It’s got more power, greater downforce, and considerably higher limits. It’s also less forgiving when it lets go, as it’s built for factory drivers, not gentleman racers with more money than on-track experience.

There’s an incredible sense of occasion to driving the M8 GTE, and it starts with the industrial-grade hardware. Without the familiar production car elements such as the dashboard and door handles found in the M4 GT4, the M8 GTE steps closer to racing prototype territory with its purpose-built interior and stripped-clean sensibility. The steering wheel, which looks like it might have been plucked from a military skunkworks aircraft, contains no fewer than 17 dials and buttons. But daunting hardware aside, all of those complications fade away. Now, I’m just driving.

But daunting hardware aside, all of those complications fade away. Now, I’m just driving.

The M8 GTE is packed with plenty of technology to help you get around the racetrack as quickly as possible, but it’s still entirely feasible to scorch the circuit by the seat of your pants. In fact, there are aspects, such as the lack of ABS, that make it a purer experience. This is both emboldening and scary all at once. The brake pedal requires significant effort to actuate; proper two-foot driving involves a serious stomp, routinely with 80 bar of pressure, which will exhaust all but the most toned quadriceps over the course of an endurance race. Lock-up lights on the dashboard indicate when you’ve pressed too hard on the brakes, but it’s actually difficult to do so because the pedal demands so much pressure. Similarly, shift lights indicate when the engine revs reach the upper registers, but the unholy howl of the powerplant also offers sufficient signal for when it’s time to tap the carbon-fiber paddles.

As I settle into the rhythm of finding the lines of the Estoril circuit, which has been made familiar to me through preceding track days in the new Z4 and M850i, the grip levels feel remarkably high despite the rain-moistened surface. Aiding the higher speed corners is the considerable downforce created by the aggressive bodywork. It’s the slower speed stuff that requires caution, even though the traction and slip controls are set to relatively tame levels of 8 and 7. (The pros have been running 5 and 5; the lower the number, the less intervention.)

Wherever I point the GTE car, it goes with unconditional obedience. Only on one corner do I feel intrusive understeer. Elsewhere, there’s enough grip that I begin elevating my corner speeds and realize that some – in fact, many – corners can be taken flat-out, while the car’s steering and chassis make it easy to track out to the curbing with outstanding precision. Faster and faster I drive, finding new confidence in how the system works so harmoniously together. The shifts are near instantaneous, the power is robust, the downforce reassuring. I feel my pace increasing with each lap, and when I return my telemetry reveals a best lap time of 1:51:210 – 1.2 seconds behind pro racer António Félix da Acosta’s best time. This is fun!

A brief spell of rain between sessions doesn’t faze me, though there’s a vague disappointment that I won’t be able to experience even more of the car’s potential by running slicks. The track is considerably wetter now, but I’m amped up and raring to go, finger on the “Wipe” button and braced for even more rain. The first couple corners feel good, though there’s a bit of perceptible slip as I power out from each apex, which requires a touch of countersteer. And then, as I’m maneuvering out of turn five, it happens: in an instant the tail comes around, and before I know it I’m sliding sideways with a clear view of the Armco filling my field of vision. The fear of failure and, worse, the terror of damaging the car, strikes me, and once the rear-end’s unwelcome rotation is initiated, I’m simply along for the ride. It’s a deeply disheartening sensation that instantly reverses the thrill of control.

In an instant the tail comes around, and before I know it I’m sliding sideways with a clear view of the Armco filling my field of vision.

Once at a halt, I tap the radio button and notify race control that I’ve spun. In retrospect, it’s silly, since there’s full telemetry in the pits and the engineers can monitor everything from throttle and brake inputs to gear position and vehicle speed. Thankfully the car stayed on the tarmac and out of the gravel. I start it up and trundle back into the pits, tail between my legs.

Spins can harm powertrains if there’s a backward slide, but diagnostics reveal no damage to the engine. With my second session cut short, there’s no time to get out on the track again in the GTE car, but I’m treated to a taxi ride in a camouflaged prototype of the hardcore M8, a final version of which isn’t expected to see the light of day until roughly the same time next year. I buckle the seatbelt and listen to the driver, a BMW engineer, tell me about the car’s controllability. A few corners in he starts drifting it, revealing the car offers quite a bit of stability despite being pitched sideways. BMW won’t say how much more oomph the M8 will have over the 523-horsepower M850i (after all, the car is still being developed and final numbers are T.B.D.), but an engineer reveals that it will certainly top the 600-hp figure. Clearly stiffer and more agile than the non-M car, the M8 performs its perfunctory pony show before returning to the pits, seemingly unflappable against the forces of entropy and track slickness.

If there’s anything to be gathered from the back-to-back experiences in these two seemingly similar but remarkably different machines, it’s that BMW appears to have doubled down on its efforts to separate the squishy grand tourers from the nimbler, sharper sporting set. The Z4 M40i’s surprising athleticism, though wrapped in a layer of civility, speaks to this trend, as does the M8’s seemingly more focused demeanor.

As ballsy but manageable as the M8 appears, the M8 GTE proves to be the mysterious mistress who taunts with speed, then stings with impetuousness. Between the two, the race car is eminently more intriguing. It’s a taste of that deliciously taboo fruit that leaves you wanting more, despite biting you in the proverbial ass. The next day I fly home over the Atlantic, still buzzing off the race fuel and dreaming of irascible, irresistible go-fast machines that signal a bright future for BMW’s speed-seeking enthusiasts.