Ignore some of the stranger features and technology, and the new BMW X5 is as good as ever.

The 2019 BMW X5 is the fourth generation of the German luxury brand's wildly popular crossover, but good luck spotting that. Much as it did with the 5-Series, BMW has made only modest changes to the X5's sheet metal for 2019, while cramming as much technology under the skin as possible. 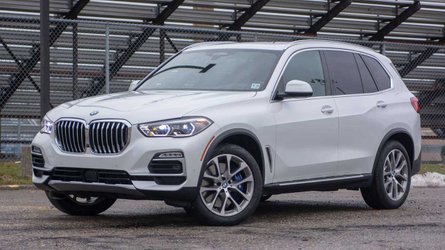 The result of this work is a crossover that's hard to get excited about, but easy to live with (with the right equipment).

Before you start poo-pooing the conservative reskin, BMW has a pretty good reason for its design restraint. In October, the long-awaited X7 three-row crossover will debut, armed with styling inspired by the X7 iPerformance Concept from last year's Frankfurt Motor Show. If you're debuting a new flagship vehicle, you're not going to let a known quantity steal its thunder, right? Right.

That said, some of the new touches don't really work. For a start, the trend toward oversized kidney grilles – typified most egregiously by the iNext Concept – needs to end. Immediately. I also wish BMW slimmed the taillights down the same way it trimmed the X5's headlights. At best, it's difficult to tell this is a BMW from behind, and, at worst, it looks like a Kia Sorento. (A bad thing only because the X5's starting price is more than double that of the Korean crossover.)

Changes in the cabin are more progressive. The overall layout isn't dramatically different, so much as BMW has stepped up the material quality. The old X5 was no slouch in this regard, but the new model gets a number of stylish touches. I dig the glass shift lever (almost certainly a response to the Orrefors crystal shifter in the Volvo XC90), the burled detailing on the iDrive control knob, and the piano black accents on the center console control surface. The available Poplar matte wood trim – featured in the gallery – is gorgeous, while the detailing on the optional Merino leather is perfect for a luxury SUV.

Because automakers are as addicted to technology as most children, the X5 has a huge range of electronic odds and ends.

The overall comfort of the cabin is impressive, as well. The seats provide the long-haul comfort that makes family road trips bearable, with plenty of support and adjustability for a variety of body types and seating styles. There's little road or wind noise, and the X5 does a fine job of limiting impact noises to the available air suspension. That said, with the driver's seat in my seating position, second-row legroom was tighter than expected for a vehicle of this size. There's only 37.4 inches of legroom in back, which is a full inch less than the much older Mercedes-Benz GLE-Class and 1.4 inches less than the Audi Q7, which also comes standard with a third-row, something the new X5 will no longer offer because of the upcoming X7.

Because automakers are as addicted to technology as most children, the X5 has a huge range of electronic odds and ends. The command hub is, unsurprisingly, the iDrive system. The latest version of BMW's ubiquitous infotainment rig pairs a 12.3-inch touchscreen atop the dash with an identically sized display in the instrument cluster (called BMW Live Cockpit); adopting the glass cockpit look that's become all the rage among premium brands. Impressively for a brand that tends to nickel and dime customers over equipment, both displays are standard on the X5.

This seventh-generation iDrive system actually looks less like iDrive than ever before. After using a tile layout for different sections in the last operating system, version 7.0 shifts the main sections – Media, Communications, Navigation, Car, and Apps – to the left side of the display. Reconfigurable widgets dominate the center of the display, allowing drivers to arrange their homepage as they see fit. As usual for BMW, there are analog buttons for quick access to the different sections, and, once inside, BMW's software team organized each area in a way that will be instantly familiar to anyone that's used iDrive in the past.

Live Cockpit offers a similar range of configurability, but that required BMW to make some design compromises. To offer drivers an expansive center section for things such as maps, entertainment info, and – because BMW still thinks its drivers switch out of the default Comfort mode – a display for the drive Driving Experience Control setting, software engineers pushed the speedometer and tachometer to the very outside of the gauge cluster. They're tough to see depending on your seating position.

Gesture control is intriguing technology, but it's still not precise or fast enough to ever feel useful.

Gesture controls make their way to the X5, as well, thanks to the move to iDrive 7.0. As with the 5- and 7-Series, twirling your finger in front of the X5's infotainment screen is supposed to adjust the volume, however, it’s ultimately pointless. You know, because you can adjust the volume on the steering wheel or with the physical volume knob. This is intriguing technology, but it's still not precise or fast enough to ever feel useful. Also, and this won't change until someone develops Tony Stark levels of gesture control, it's hard not to look like an idiot while using the X5's most useless feature.

I also experienced an annoying error on the drive route around Atlanta. The knob and buttons to control iDrive completely froze, and nothing I did could get them to work again. This was almost certainly a hardware issue – I never lost the radio, and the navigation continued to read out directions and reroute me where necessary. But I couldn't make any other changes, even though the rest of the controls on the center console continued to work.

BMW would very much like customers to believe the X5 is useful off road. It's so eager to sell this narrative that not only did the company add a Rock driving mode to the Driving Experience Control, BMW sent me on a 30-minute excursion into the Georgia woods to put the X5 xDrive40i – and its street tires – through its paces. And to be entirely honest, for such a road-focused car, the X5 has legitimate off-road chops. It can and will tackle more than just heavily traveled two-tracks. An available Off-Road package adds an automatic locking-rear differential, an adjustable two-axle air suspension, and underbody protection, along with the the standard array of cameras and a well-executed hill descent control system. And it all works. But just because a vehicle can go off-road doesn't mean it wants to.

Imagine, for a second, a dog. Imagine trying to drag that dog to a place he doesn't want to go, such as the vet or (if your canine is anything like mine) into the car. Imagine trying to pet him – to calm him down – as he's actively resisting. You can see and feel just how tense the poor animal is. That's what driving the X5 off-road is like.

Just because a vehicle can go off-road doesn't mean it wants to.

The X5 knew it could do the work (no automaker sets its car up for failure, after all) and that it could do said work well. But lacking proper off-road gear (a two-speed transfer case with a low-range gearbox, a proper set of tires, and a locking-front differential being the most conspicuous absences), the X5 never felt comfortable or happy with its task. The obstacles I encountered were more extreme than what 99.99 percent of American drivers will be comfortable with, and I'd bet real money the remaining hundredth of a percent that do want to tackle these kinds of trails will look at a Range Rover Sport, Mercedes-Benz G-Wagen, or even a Jeep Grand Cherokee before considering the X5.

The X5 is better and far happier on paved roads. While BMW will continue to offer an X5 with the 4.4-liter, twin-turbocharged V8 (the xDrive50i), the volume model is unquestionably the xDrive40i and its turbocharged 3.0-liter straight-six. With 335 horsepower and 330 pound-feet of torque, there's plenty of muscle to get the X5 up and moving. As in the 340i and 540i, this is an impressively smooth engine that offers its power and torque up in a linear, predictable fashion, which it then transfers to the drive wheels by way of a ZF-built eight-speed automatic transmission., The X5's base setup is so good that I'm not even upset I didn't have time to drive the more powerful xDrive50i.

Less excellent is the X5's four-wheel-steering system. Called Integral Active Steering, it's available as part of the $3,650 Dynamic Handling Package although it's also available as a standalone item for $1,150. At high speeds, IAS turns all four wheels in the same direction, increasing stability. At lower speeds, the rear wheels turn in the opposite direction to the fronts, tightening the turning circle and increasing responsiveness.

This is a fine thing on a performance vehicle, such as the Mercedes-AMG GT 4-Door, but it felt unnatural and difficult to predict in the X5. I routinely entered turns too quickly because the X5 simply didn't bleed speed like a vehicle of its size should. IAS makes the X5 feel twitchy and unpredictable in corners and combined with the lifeless (but perfectly weighted) steering, this means it isn't the same confident handler in its fourth generation as it was in its third. I've requested a loan in Detroit of a 2019 X5 with IAS so I can do a more thorough test. Perhaps with more than a few hours of seat time, the positives of BMW’s four-wheel steering will be more evident.

But while that price tag is high, it doesn't need to be. There's enough going on with the X5 that I'd feel comfortable passing on some features that either aren't worth the price or aren't ready for prime time. Integral Active Steering and the Off-Road Package are prime examples, bot of which represented a hefty $5,100 of my tester's price. At the same time, I'd strongly recommend hanging onto the air suspension and the Driving Assistant Plus – the active safeties on offer are quite good.

The 2019 BMW X5 does a number of things well. It's a smooth, relaxed cruiser, comes with a fantastic powertrain, and features a lavish cabin. The latest version of iDrive works well and looks excellent (even if the new Live Cockpit doesn't display information efficiently enough), and while it didn't stand out during my testing, there are expansive active safety systems available in the Driving Assistant Plus package. So long as you avoid some of the more unnecessary options such as the Off-Road package and Integral Active Steering, the 2019 X5 is a smart buy in one of the world's hottest luxury segments.