The Panamera 4S and Turbo get a middle sibling.

The first turn of the Bahrain International Circuit requires late turn in, and at the speed we’re going, I’m unsure of how this is going to shake out. Following the line of Porsche’s driver – the rear of his yellow 911 Turbo unmistakable from the 2019 Porsche Panamera GTS I’m piloting – I go past the point I’d instinctually crank the wheel to the right, and as he seamlessly exits out of the turn, I make my move. Despite the Panamera GTS’s 116.1-inch wheelbase, the steering acts as if it’s paired to my brain, while the rear end as if I was driving a 911. In a flash I realize turn one, the “Michael Schumacher Corner,” is behind me. My foot goes crashing back onto the throttle, it’s going to be a good day. 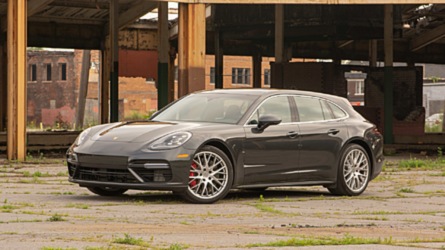 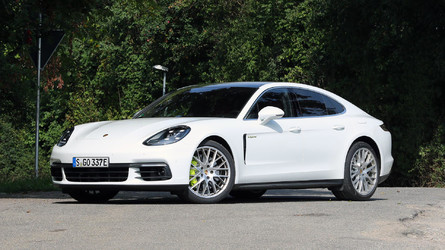 As in the first generation, the 2019 Porsche Panamera GTS and GTS Sport Turismo are here to bridge the gap between the 4S and Turbo variants. And there are some significant differences between all three. The Panamera 4S counts on an excellent, Audi-sourced 2.9-liter twin-turbo V6 (which Motor1 recently sampled in the new Audi RS5) that cranks out 440 horsepower. The GTS and GTS Sport Turismo opt for the Panamera Turbo’s twin-turbocharged 4.0-liter V8.

Here, it’s good for 453 hp and 457 pound-feet of torque, 13 ponies and a significant 73 lb-ft up on the 4S, but still far from the Turbo’s 550 hp. All Panameras employ Porsche’s excellent eight-speed dual-clutch transmission, replete with steering-wheel-mounted paddle shifters to channel the grunt to the ground. But the power bump is only one of many attributes that might lure Panamera buyers to the GTS sedan and Sport Turismo variants.

There’s the emotional aspect of packing a true V8 under hood, but there’s also what comes paired with it as standard. A sport exhaust system – though it’s never quite as raucous as an AMG – ups the driving experience, an air suspension with a sport chassis that’s 10 millimeters lower improves agility, and massive brakes help scrub speed in a hurry, like on the final, glorious and near-endless straight of Bahrain’s F1 track. Unique, 20-inch Panamera Design wheels in satin black cover 15.4-inch brakes up front and 14.4-inch units on the rear axle.

The Sport Chrono package is standard, as well, and boasts an easy-to-engage launch control feature, steering-wheel-mounted mode dial, and a Sport Response Button that delivers maximum power output for 20-second spurts. All of that helps the GTS models hit 60 mph in just 3.9 seconds from rest regardless of body style and a hair quicker than the 4S, if bragging rights are a thing. The interior builds on the standard Sport Design’s black theme with Alcantara and aluminum trim anodized in black. The 2019 GTS sedan and GTS Sport Turismo also get an excellent color head-up display, a feature that’s new to the Panamera range. Even in the bright desert sun at noon, the font and information are easy to read.

I spend most of my time in Sport Plus, partly because that’s best for the track, but also – in the case of the road drive – because life’s too short for Normal or Sport. (Porsche also offers a custom Individual mode). On the road heading to the track, I can appreciate the familiar Panamera cabin that’s distinctly sleek, modern, and sports a competent infotainment system. Each driver can customize their own system with a home screen featuring the things they want to see most, whether it’s radio stations, navigation setup, or setting the sports exhaust to agitate – or please – your neighbors.

At the track, the focus is predictably on how the GTS sedan and GTS Sport Turismo drive and handle. While there are technically very slight weight differences between the sedan and Sport Turismo versions, Porsche engineers worked to negate those differences – especially in drive feel – meaning the choice between the two boils down to styling preferences.

My first go on Bahrain’s circuit is six laps on what Porsche’s drivers have dubbed “The Palm Circuit,” as it runs along the track’s outer banks. Part of this run was getting used to the cars at speed on a foreign track, but I also gleaned this nugget: If you want to play with the paddles, it’s simply because you want to control the power yourself, not because it’ll make you any quicker. I noticed I was often a gear too high, or would shift a second past the ideal time. Porsche’s engine management will simply be better, unless you’re Lewis Hamilton or Max Verstappen. Maybe.

The night runs – what a gift night racing on a brightly-illuminated track was –were a different story. Here, I simply left the car in Sport Plus, and drove, switching to the F1 track, which features more turns, including a particularly tricky elbow on turn eight. But it was here where I was completely in sync with the car, and able to stay closer to Porsche’s lead driver, while really appreciating the rear-axle steering.

The Porsche Panamera GTS and GTS Sport Turismo build on the 4S’s capability and offerings, and bundle several features that make the GTS hard not to consider if you’re looking at the Panamera. Like the company’s other GTS models, the Panamera GTS is an ideal middle child in the ever-growing Porsche range.