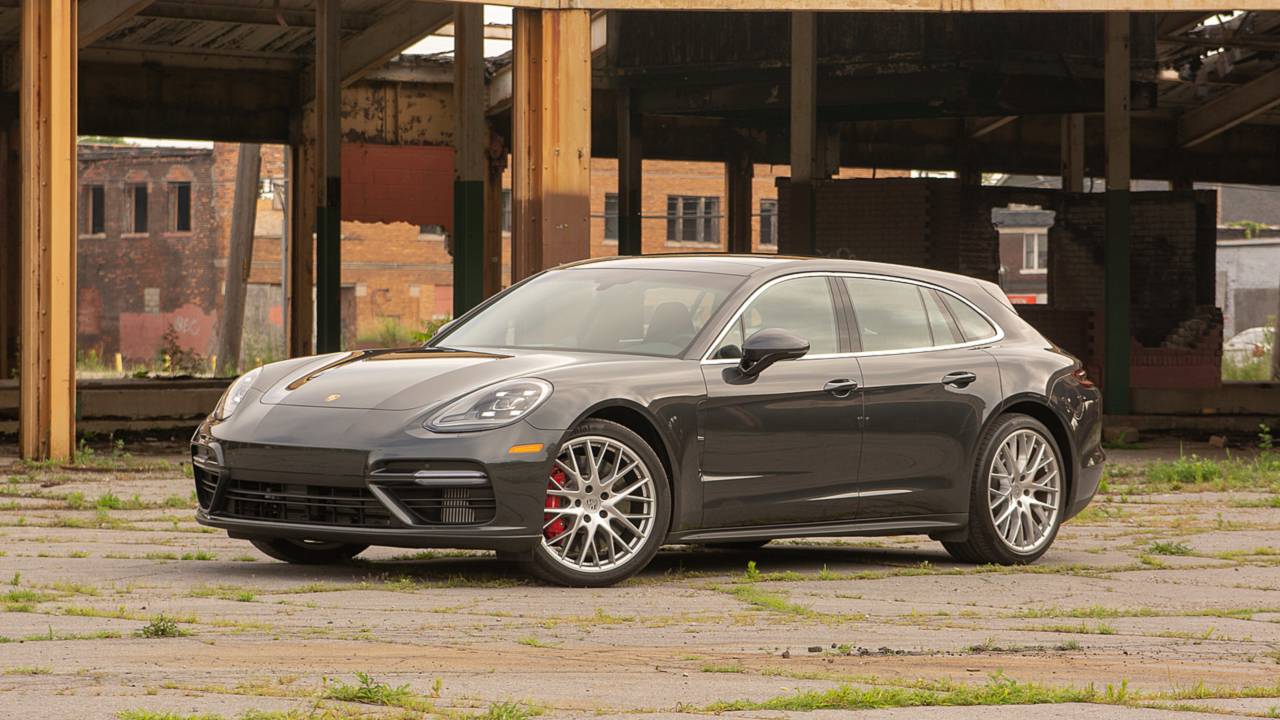 With 911-like thrills and Cayenne-like utility, the Panamera Sport Turismo is the all-around Porsche to buy.

With respect to the Porsche 911, the new Panamera Sport Turismo is my favorite vehicle to come out of Zuffenhausen in a long time. It's not because it's a station wagon, or because the Turbo I've been testing has 550 horsepower, or even because it's available in brown.

All of those things help, sure, but it’s how the Panamera Sport Turismo negotiates between sensible, respectable wagon-ness and just being a Porsche that makes it worth considering. Its cargo hold is tiny relative to true wagons, but it will still swallow a weekend’s worth of bags and it’ll look stunning in the process. The back seat is tight for anything more than two adults, but it’s not some vestigial growth like on the 911. And it goes like the dickens, but is perfectly civilized and docile at the press of a button.

The Panamera Sport Turismo is a compromise between what a well-to-do adult may want (a 911) and what they actually need (a Cayenne). It fails to live up to both of those vehicles, but as a middle ground that’s going to stand out in a crowd, it’s an overall success.

Okay, so let's get this out of the way. The Porsche Panamera Turbo Sport Turismo I've been testing is hilariously expensive and still leaves a lot of equipment on the table. There are no active safety systems. It has none of Porsche's legendarily extensive aesthetic options. And yet the car shown above still costs $170,100.

That's the $154,000 base price plus a $1,050 destination charge and just over $15,000 in options. The final figure accounts for the 21-inch Sport Design wheels, blind-spot monitoring, ventilated front seats, the Sport Chrono Package, and most consequentially, Porsche Dynamic Chassis Control Sport and rear-wheel steering.

That said, the Turbo does come with some interesting improvements over lesser Panameras – there's obviously more power, along with stouter brakes. And features like the Bose audio system, Volcano Grey metallic paint, and leather upholstery and aluminum trim – all premium extras on non-Turbo models – come standard here, accounting for some of the Panamera Turbo's higher starting price.

The Panamera Turbo Sport Turismo's most obvious competitor is more powerful and far more affordable. The 603-horsepower Mercedes-AMG E63 S 4Matic Wagon – and breath – starts at around $107,000. Fully loaded an E63 Wagon is almost $10,000 less than the Panamera's starting price, at $145,435.

There's a good reason Porsche calls this body style a Sport Turismo and not a station wagon – it's because it isn't a wagon. Sure, there's a long roof and a two-box shape, but the aggressive rake of the rear window emphasizes sportiness and speed rather than utility. Porsche designed the Panamera Sport Turismo so it looks sexy, not so it can haul lots of stuff.

But while that's bad for cargo, it's great for style. The Panamera Sport Turismo is quite unlike any other vehicle on the U.S. market, blending the look of an Audi A7 and a traditional wagon to create something fun, original, and very pretty. Aside from the shape, this car benefits from the same updates that helped transform the Panamera from eyesore to one of the more attractive cars on the market.

Ignore the sexy profile, and the Panamera is still a very attractive car, thanks to its recent redesign. The big improvement comes at the back, where Porsche linked the thin rear taillights with a strip of LEDs and a layered look that borrows from the latest 911 Carrera 4. The shape is better too, appearing more reminiscent of the Carrera than the controversial first-gen Panamera. Up front, There's more visual resemblance between the Panamera and Porsche's sports cars, with wide-set headlights and a flat hood that plunges forward, giving the car a cobra-like appearance when viewed head-on. It's a very good look.

This is a luxury car first, and a sporty vehicle second, but it's the way Porsche blends those two characters in the cabin that’s truly impressive.

The standard 14-way seats, for example, have a huge range of adjustability, and go very nearly to the floor. With legs almost straight ahead, it gives the Panamera a sports-car-like driving position but with more head, shoulder, and hip space. The seats are remarkably comfortable and supportive, making them perfect for either long highway runs or tight, twisting roads – frankly, I can't understand why anyone spends money on the optional 18-way chairs.

You can stuff three people in back, but the middle seat is laughable, with little more than a saddle on offer for the Panamera's most unfortunate passenger. The Sport Turismo is as close as a five-seat vehicle can get to being a two-plus-two. But for those backseat passengers, the space isn't oppressive. Heads aren't banging the roof and knees aren't tucked into chests due to a lack of space – it's an area a family with two teenagers shouldn't hesitate to use.

Regardless of where you're sitting in this cabin, the material quality is stunning. Porsche's leatherwork on the dash, doors, and seats is clean and the hides are beautiful. In particular, the leather on the dash is impressively soft. Where there isn't leather, there's piano black trim – I have a love-hate relationship with this material. It covers the center console and the touch-capacitive controls, and while it looks good, it also collects fingerprints and dust like nothing else. Aluminum trim in the rest of the cabin is cool to the touch and impressively detailed.

In the cargo hold, there's 18.3 cubic feet of space that expands to 49 cubes with the second-row folded down. Those numbers are only slightly higher than the standard Panamera and its liftback hatch, which promises at least 17.6 cubes and up to 47.3. All of those figures seem low for a vehicle this size, and they are – a Mercedes-Benz E-Class Wagon offers up 35 cubic feet of space with its second row up. Put the blame on two factors. First, that sexy rear window eats into cargo space. Second, the Panamera Turbo Sport Turismo needs to accommodate 11.5-inch rear tires, which eats into the cargo floor.

The Panamera's 12-inch touchscreen is among the best in the business. Beautiful and incredibly quick to respond with crisp animations, it's an absolute pleasure to use. The system's excellence is paired with fantastic touch-capacitive, redundant buttons below the expansive display. Everything is an absolute pleasure to use – Porsche has taken these two technologies and executed them to their fullest potential. Apple CarPlay is here, but Android users are out of luck.

That doesn't mean it's all particularly easy to figure out, especially if, like me, it's been a minute since you've driven a Porsche. For a start, I had a small screaming match with my test unit after not realizing that its default seat position and climate control settings were linked to the key. After repeatedly trying to set the individual memory settings, I finally hit the little key button below it, so my tester would maintain its seat position. And while Porsches are generally reliable, I'm always worried about the long-term sturdiness of retractable vent shutters, like the Panamera's.

But ignore these tiny foibles, and the entire driving environment is a pleasure to interact with. Porsche's twin digital displays in the instrument cluster have just the right degree of flexibility, and the steering wheel controls are very easy to figure out.

While Porsche skimped on certain pieces of equipment for my Panamera, it had almost everything I'd want for an impressive driving experience. Twin-turbocharged V8 with 550 hp and 567 pound-feet of torque? Porsche Dynamic Chassis Control Sport with torque vectoring? Rear-wheel steering? Sport Chrono Package? Check, check, check, and check. The only performance items that were missing were the wildly expensive carbon-ceramic brakes ($8,970) and the $3,490 sport exhaust.

In a straight line, the Panamera Turbo's performance is impressive. Torque from this 4.0-liter, twin-turbo V8 is constant, and the standard all-wheel-drive system means launches from a standstill are drama-free. Even at freeway speeds, I was never wanting for more power. What I was wanting, though, was more noise. Simply put, the Turbo is way too quiet.

Porsche did such a fine job of isolating the cabin from intake and exhaust noise that it's disconcerting – the correlation between power and engine noise is wonky. All my other senses were telling me I was accelerating quickly – and I was, since the Panamera Turbo takes just 3.4 seconds to hit 60 – but my ears weren’t.

The Panamera Turbo Sport Turismo comes standard with a four-corner air suspension and Porsche Active Suspension Management, but my tester added Porsche Dynamic Chassis Control. Essentially a set of active sway bars, PDCC works to curb body roll while cornering. Combined with rear-wheel steering, the Panamera felt far more agile than any vehicle this size has a right to.

This is a genuinely big car, tipping the scales at just under 4,500 pounds. But it's approachable and easy to place on the road, while it attacks corners with vigor. Turn-in is very sharp, thanks to the fast steering and lack of body roll. But it's also not an uncomfortable car.

With the air suspension set in its most comfortable setting and the ride height at Normal, even the 21-inch wheels and thin 30-series tires couldn't disrupt the Porsche's ride. On Detroit's notoriously crummy roads, the Panamera transmitted impacts to the seat and through the steering wheel, but it minimized every bounce and bump to the point that I couldn't be bothered to care about them.

But Porsche went a smidge too far in isolating its cabin. I expected some kind of telepathic steering from the Panamera, and it never really delivered. Likewise, feedback through the seat isn't all that great – I wonder whether there's just too much of a good thing here. The chassis is so good and so composed over rough stuff, that the sensations through the chassis and steering drivers crave get lost in the shuffle.

Porsche is a German automaker, and like its counterparts, a high starting price does not automatically include active safety systems. My tester had blind-spot monitoring, which wasn’t even standard, and that's it. The cruise control is just the old regular kind, not adaptive, and I was the only one controlling the brakes and steering at all times. The average score it earned in this category was for the standard front and rear parking sensors, rear-view camera, and the aforementioned blind-spot system.

It lost many more points for offering no active safety gear as standard equipment. If you want adaptive cruise control, automatic emergency braking, or lane-keeping assist, you'll need the $5,370 Assistance Package. That pack bundles each of those systems into Porsche's excellent InnoDrive suite, and then adds a night-vision system to the bundle. InnoDrive is also available as a standalone option for $3,910, while adaptive cruise control is available for $2,890.

In the plus column, visibility in the Panamera is excellent fore, aft, and laterally, although a 360-degree camera would have still been a help.

In news that shouldn't shock anyone, a 550-hp, V8-powered Porsche is not very efficient. Look for EPA estimates of 18 miles per gallon city, 23 highway, and 20 combined, although my real-world testing was far lower. I managed to net around only 15 mpg, although a heavy right foot may have had some impact there. To make matters worse, premium fuel is required.