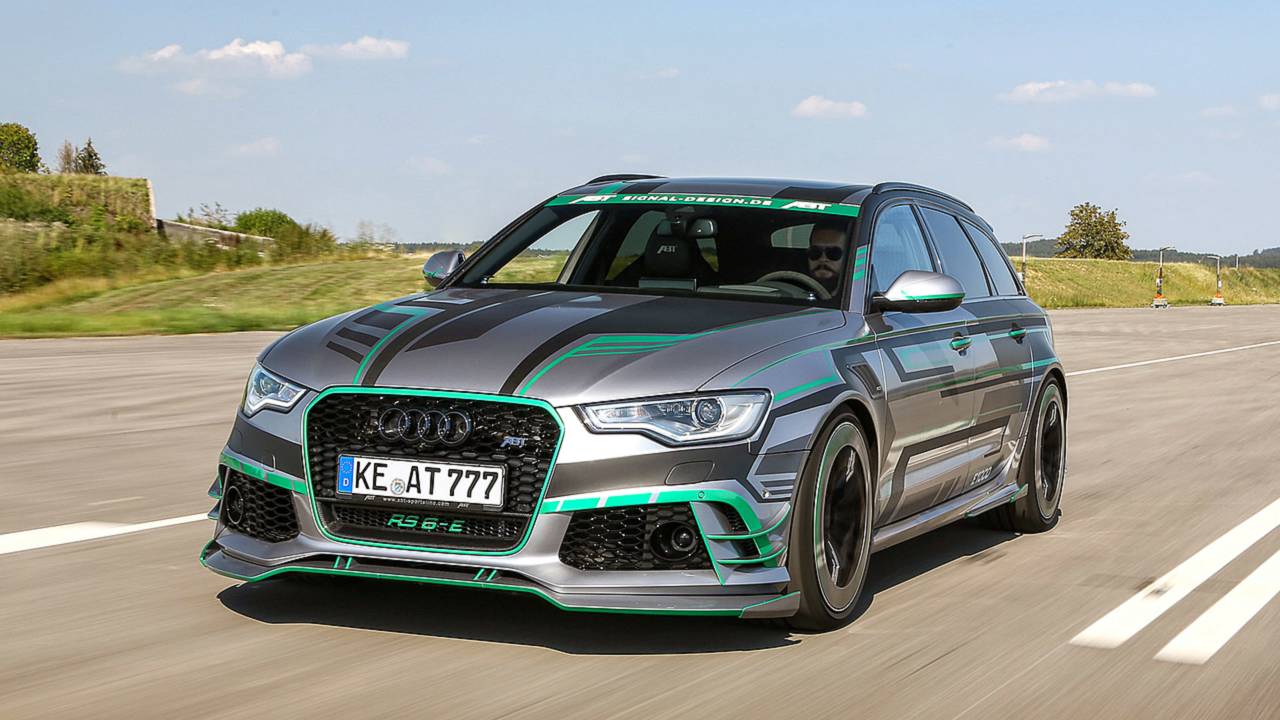 The future of tuning is electric, and that's a good thing.

According to Abt, this is the future of tuning. For us it is probably the craziest family bomber of all time. The world's largest Audi tuner has taken an RS6 and nearly doubled its power. With an output of 560 hp that is quite remarkable. But even more remarkable is this: The whole thing happens by partial electrification. An RS6 hybrid. With up to 1,018 horsepower and 952 pound-feet of torque. Lord in heaven.

ABT Audi RS6-E's Brutal Acceleration Will Give You A Facelift

First of all, the mad tuners in Kempten have installed everything that turns a normal Audi RS6 into an Abt RS6-R – an angry-looking body kit, coilover suspension, 21-inch wheels, and an increase in output for the 4.0-liter twin-turbo V8 to 730 hp and 679 lb-ft. Oh, and there’s also a killer exhaust system playing the Hell’s own bass line.

We’ve no idea if the thrust of a 730-hp station wagon can ever get boring (it probably can’t), but apparently the people at Abt saw need for another extra serving of "Woooaaah!". The electric motors sit between the transmission and the exhaust system. Weighing just over 150 pounds, they complement the engine with 288 hp and 371 Newton meters.

"The V8 doesn’t allow any room in the engine compartment, so we’ve been looking for a solution that can be easily transferred to other cars. The transmission tunnel is perfect,” project leader Jens Häberle told Motor1.

The 13.6-kWh battery is located in the floor of the RS6’s expansive trunk – it doesn’t even suck up any space, although there is an extra 562 pounds of weight. The Abt RS6-E, as the official name, tips the scales at 4,861 pounds. The suspension tuning is almost the same compared to the RS-R, aside from stronger springs to account for the weight.

Ha, that's really easy this time. This special test is limited to exactly one direction - straight ahead! Abt invited Motor1 to a test site in Memmingen in the Allgäu and reserved the longest straight that can be found there. Unfortunately, the thing is less than a mile long. For the unholy hybrid boom of RS6-E, that’s just not enough.

After signing away our lives in case something suddenly catches fire (this is a prototype, after all), we secure ourselves in the cabin with its poison-green contrast stitching, ready to weather the E-Pokalypse. Despite the madness underneath (and the contrast stitching), the cabin doesn’t look any different than the standard RS6. There are no confusing cables snaking across the dash or jiggly auxiliary gauges. Only a seductive green button with a lightning symbol has snuck onto the Alcantara steering wheel.

Pressing the button activates the RS6-E’s extra power. See, Abt doesn’t let drivers permanently deploy four-digit power, offering it instead as a push-to-pass button. A shot from the electric motors lasts about 10 seconds and sucks about half a kilowatt-hour from the battery. Wait 30 seconds and the game starts over. Drivers can repeat this process 10 to 15 times in a row before heat becomes an issue. As for the battery, it continuously recharges, to keep the fun flowing.

We secure ourselves in the cabin with its poison-green contrast stitching, ready to weather the E-Pokalypse.

But how does it drive now?

Ah, right, sorry for digressing. To protect the mechanicals (and, presumably, the tires) there are still two conditions to applying the RS6-E’s electric power. Boost is only available from 62 miles per hour and in gears three through eight, while at least 75 percent of the throttle needs to be applied. Or, as a friendly Abt employee tells me shortly before I sample the RS6-E’s power, “Just kickdown, press the button at 62, and stay on the power.” Yeah, they didn’t have to tell me twice.

With its usual face-deforming brutality, the wild RS 6 launched from the starting blocks. The eyes are staring spellbound at the head-up display, the right index finger nervously circling around the green lucky button. 45… 54… 61… hit it!

I would have imagined what happens next differently. I expected the obligatory warp-speed effect, but the electric thrust is astonishingly gentle. Gentle, but very sustainable. Believe me, ten seconds can be pretty long. After almost 750 meters, two flags indicate that I should brake now please. The speedometer is reading 150 mph as I bring the speed down.

It always feels a bit like being pushed so hard from behind that the rest of the car isn’t quite coming along, as the V8 engine roars alongside the whirring of the electric motor. The latter, by the way, is extremely present, since you’re literally sitting on the electric motor.

It will be difficult because the Abt RS6-E is unique and will remain so for the time being. However, according to company boss Hans-Jürgen Abt and chief developer Rolf Michel, the company could implement the RS6-E’s technology in the future. Since the release of the car, the phone is no longer quiet, Hans-Jürgen Abt says cheerfully.

Abt has a lot of experience with electric power, thanks to his Formula E involvement and the electrification of various Volkswagen Caddy vans for Swiss Post. It only seems to be a matter of time before this expertise can be applied for the benefit of private customers.

Does this make sense? Well, it's more of a bauble, a show-off, a developmental bicep, so to speak. For tuners, however, environmental restrictions are making the market more difficult. Electric power, with its almost unlimited possibilities, could become a lucrative business, especially if it’s implemented with the refinement of the RS6-E.

Cons:
Electric boost only available for a short time
Production version would probably be very expensive