2018 Toyota Camry XSE Review: Getting Better All The Time 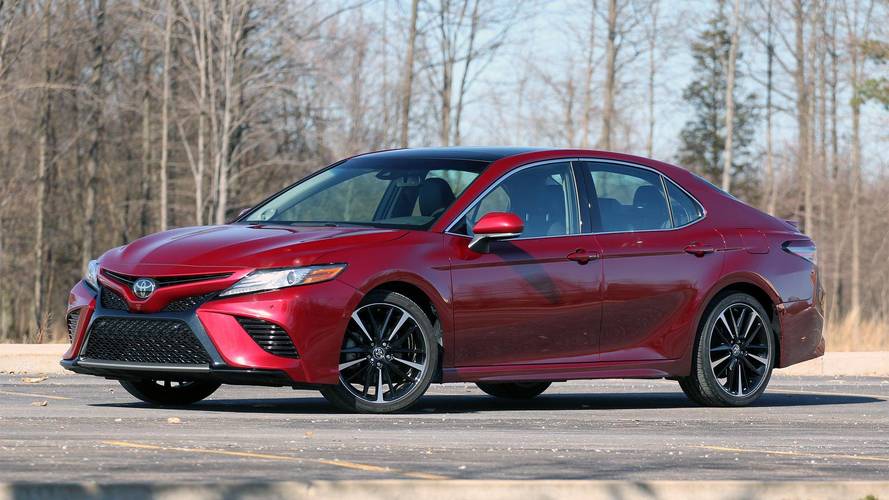 I’ve never understood the Toyota Camry’s popularity. It’s not the best midsize sedan in most categories, and yet it has wildly outsold all others for years. The latest Camry, completely redesigned for 2018, seems to be more of the same: more expressive styling, more power, more space, more safety, and more efficiency. Going by past experience, it’s safe to bet it will get more sales, too.

While its new styling isn’t for everyone, including myself, the Camry offers enough to appreciate that I can see why tens of thousands of people continue to buy one each month. Truly, the only damning complaint left is that it still doesn’t offer Apple CarPlay and Android Auto compatibility, though Toyota intends to fix that next year.

The new Camry has a starting price of $23,495, which isn’t the lowest in the segment, but you get what pay for; the base Camry LE comes equipped with standard tech, infotainment, and safety features that most base-model competitors don’t.

The Camry XSE I tested, meanwhile, costs $35,333 and comes with Toyota’s new 2.5-liter four-cylinder engine. You can spend even more, however, by choosing the optional 3.5-liter V6 engine. Still, regardless of engine, the XSE is the Camry’s new top trim level, and it’s common these days for fully loaded midsizesize sedans to reach over thirty-five grand in price.

Toyota hasn’t played it safe with the Camry’s design in recent years. The last few generations have been penned with an aggressively styled look that never seemed to match its four-door family car mission. And yet, people have continued to buy them in droves. This new design is the wildest one yet, especially in this sporty-looking XSE trim. Toyota does give you options, though; other trims have tamer front and rear fascias.

Beauty is in the eye of the beholder, and while my eyes don’t behold a lot beauty in the Camry, I do appreciate the functionality contained within its shape. The roofline, for instance, doesn’t slope into the rear window until after the passenger compartment, which provides for class-reading rear seat headroom. Also, designers have pulled down the bottom of the side windows, which combats claustrophobia and aids visibility.

The new Camry’s interior is well designed and constructed with materials appropriate for its price point. That is to say, it’s no luxury car, but neither does it feel cheap inside. There’s decent leather on the seats, nicely finished plastics, and some glossy surfaces to mix things up.

Again, though, look past the shape of things to find what makes the interior special: space! The Camry is a very roomy sedan – among the best in the segment and behind only the new Honda Accord. Rear-seat passengers, in particular, have a surprising amount of space to stretch out their limbs. Note, though, that Toyota achieved this feat, despite shrinking the car’s height, by lowering the seats themselves some inches. That means the Camry may be harder to get in and out of for some people.

While Toyota has updated its Entune infotainment system with better graphics and snappier performance, it still looks and operates like a system that’s a few years older than state of the art. Also, Toyota is still not offering Apple CarPlay and Android Auto on the Camry either, though we’re told it will be on 2019 models.

Ironically, the Camry does offer wireless charging for your smartphone, which is accomplished via a well-placed charging pad ahead of the shifter. Other bits of tech to appreciate inside the Camry include the large, high-res head-up display, and a fair number of USB ports for charging devices.

Toyota gets kudos for offering a pair of very powerful engines. One is a 3.5-liter V6 offering a muscle car-like 301 horsepower, while my Camry XSE tester sports the new 2.5-liter four-cylinder engine producing 208 horsepower and 186 pound-feet of torque. In other trim levels, it still makes 203 hp, and that’s more power than base engines in the Honda Accord, Nissan Altima, and Chevy Malibu, and its fuel efficiency is among the highest in the group, as well.

That said, the 2.5-liter is naturally aspirated, and without the aid of a turbocharger, achieving peak power requires lots of revs. The eight-speed automatic transmission, meanwhile, is tuned for efficiency and upshifts as quickly as possible. Thus, the engine’s full power isn’t normally felt unless you snick the shifter over into Sport mode, which remaps the shift points to hold gears longer.

As for handling, the Camry benefits from an all-new platform that’s significantly stronger than before, as well as a new rear suspension, both of which contribute to a higher level of overall handling. Other things, like the steering and braking, feel more capable than in Camry’s past, too. Better than before, however, doesn’t mean best; the Camry’s handling still falls short of segment leaders like the Mazda6 and Honda Accord.

More and more automakers are following Toyota’s lead by including advanced safety features as standard equipment on all their cars. Ford recently announced that its CoPilot360 safety suite will soon come standard on all models, and Nissan has promised the new 2019 Altima midsize sedan will come standard with automatic emergency braking, forward collision warning, and Intelligent Driver Alertness. Still, Toyota deserves credit for starting this trend that greatly increases the safety of drivers, passengers, and pedestrians alike.

As mentioned, despite the Camry’s new 2.5-liter four-cylinder engine being the most powerful base engine you can buy in a midsizesize family sedan, it’s also one of the most fuel efficient. It scores official ratings of 28 miles per gallon in the city, 39 on the highway, and 32 combined. While the new Accord has a slightly higher combined rating of 33 mpg, the Camry bests it on the highway by one mpg. The Camry also has a big 16-gallon fuel tank, which means over 500 miles can go by between fill ups.

If fuel efficiency is your top priority, Toyota also offers the Camry Hybrid, which can achieve up to an incredible 52 mpg combined. What’s more, Toyota offers the hybrid version in several trim levels, not just expensive ones that come loaded with features you may not want. Even the base Camry LE is offered as a hybrid.