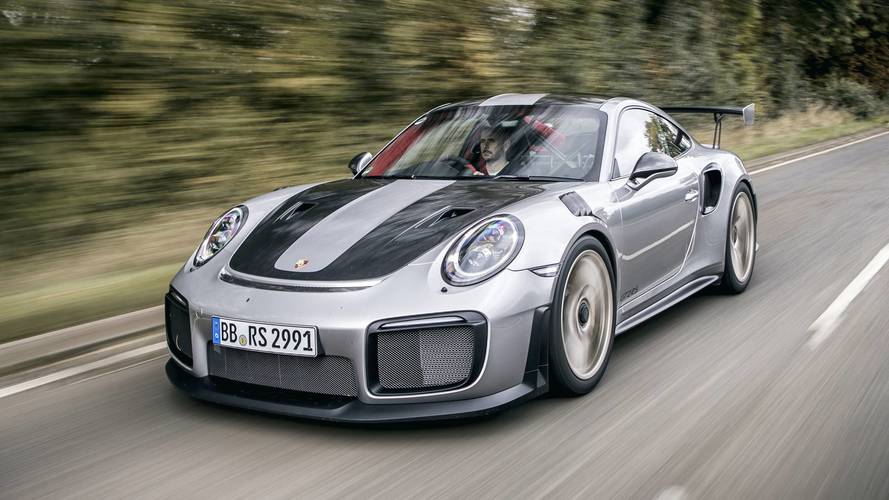 Did anyone ever get out of a 911 Turbo S and proclaim it too slow? Or a GT3 and think it could do with being a bit sharper? Evidently so, Porsche answering those questions with this, the new GT2 RS. It’s an intriguing mash up of each, with the promise of more of everything.

The GT2’s predecessors have quite a reputation, rightly or wrongly, its more recent RS iteration being dubbed the ‘widowmaker’. That’s in reference to its combination of massive power, and the potentially tricky handling that came with it. The GT2 RS appeals to a certain type of customer, then, Porsche’s GT boss Andreas Preuninger saying they’re a little bit more overt, demanding the very best performance, so the GT2 RS is deliberately loud, both visually and aurally.

Preuninger also admits it’s a riposte to those commentators that complain the GT department has lost its focus on outright speed and instead has been building more purist-orientated cars like the 911 R and manual GT3.

The GT2 RS has very much its own identity, its mixed parentage creating a monstrous hybrid, very much in the Marvel superhero sense, not the Toyota Prius one.

To counter those arguments, the GT department took the GT2 RS to that track for a timed lap. The result was a 6-minute, 47.3-second lap, beating all production car comers and smashing even Porsche’s own predicted times by some considerable margin.

To allow that, the GT team has thrown everything at the GT2 RS and taken a bit out too. The engine is derived from the Turbo S’ 3.8-liter biturbo flat-six; the chassis, aero, and weight saving more akin to the direction the GT3 takes. It’s no simple mash-up, though. The GT2 RS has very much its own identity, its mixed parentage creating a monstrous hybrid, very much in the Marvel superhero sense, not the Toyota Prius one.

You can’t help but have an opinion of it, the GT2 RS’ thuggish, cartoonish track refugee appearance not exactly shy. It’s all functional, though, those many intakes, wings, and protuberances all doing one thing: creating speed. And lots of it.

That massive wing, depending on angle, develops up to 992 pounds of downforce, though if you want to reach the quoted top speed of 211 miles per hour, you’ll want it at its 750-pound setting.

There’s no push-to-pass mode switch on the steering wheel because, really, with 690 hp at your disposal, everything’s already dialed up to eleven all the time anyway.

If that huge rear wing has got Porsche written on its top surface and there’s a stripe up the bonnet and roof, you’re looking at a Weissach Pack-equipped GT2 RS. That, like the 918 Spyder Weissach before it, adds a sizeable amount to the bill. Here it adds about 10 percent to the $293,200 list price, that bank balance lightening also removing about 64 pounds of mass from your new stripy plaything. We don’t envisage anyone ordering their GT2 RS without the Weissach kit; could you imagine the embarrassment of saying you had? Your mere 3,241-pound curb weight would be a laughing stock up and down any track day pit lane.

You could, of course, suggest that with 690 horsepower and 553 pound-feet of torque from 3.8-liter engine, dropping another 64 pounds is unnecessary. And you’d probably be right. Porsche doesn’t quote any difference in figures for the 0-62 time, which, despite the limitations of channelling its prodigious grunt through the rear wheels, is achieved in 2.8 just seconds. It’ll do double that, 0-124, in 8.3 seconds, making this the quickest 911 you can buy.

The engine’s huge output is delivered forcefully, it punching with grimace-inducing pace from 2,000 rpm to around 5,000 rpm, before and after which it’s merely shockingly quick.

The standard interior is bright red and black – like Dracula’s coffin, only in Alcantara. It is so-colored because about 80 percent of 997 GT2 RS customers specified their car that way, though you can, of course, specify it with subtler hues. Do that. And if you’re ticking option boxes you might as well have the Chrono pack, which adds some functionality to the display screens if you’re intent on measuring your lap times using Porsche’s Track Precision App. There’s no push-to-pass mode switch on the steering wheel because, really, with 690 hp at your disposal, everything’s already dialed up to eleven all the time anyway.

That it is fast comes as no surprise, really. The engine’s huge output is delivered forcefully, it punching with grimace-inducing pace from 2,000 rpm to around 5,000 rpm, before and after which it’s merely shockingly quick. Helping produce this power are water spray-cooled intercoolers, a titanium exhaust, and revised internal components to cope with the flat-six’s significantly increased output. There’s little perceptible lag, this engine’s turbocharged nature meaning it runs out of revs about 2,000 rpm quicker than its naturally aspirated 4.0-liter GT3 relation. But this biturbo six is a responsive, immediate thing.

Shifting gears is done via Porsche’s seven-speed PDK dual-clutch gearbox. PDK is quicker, so it’s fitted as standard – the shifts instantaneous, the paddles never second-guessing or denying you your decision, unless you’re particularly daft. Just try to resist the temptation on any drive to not do a launch lontrol start, the way the GT2 RS catapults down the road when doing so being hilariously addictive.

It’s not the performance of the GT2 RS that’s the highlight of the experience, but the ability to exploit it.

It’s a vocal engine for a modern turbocharged Porsche, though it lacks the intense, singing highs of its 4.0-liter GT3 cousin. Its bassy, deeper-toned notes aren’t as rousing, but what they signal is ridiculous, any-gear pace.

In that regard, the 911 GT2 RS is up with its contemporaries like the Ferrari 488 GTB and Lamborghini Huracán Performante against the clock, though it doesn’t quite manage to achieve the outrageous mid-range effervesce of the freakishly quick McLaren 720S.

It’s a different proposition though: more hardcore, in looks and ideology, all of which makes the chassis something of a surprise. Given its ball-jointed nature and Nürburgring focus you’d rightly expect harshness and compromises. It’s testament to the GT department’s efforts with the damping that the GT2 RS isn’t stymied by the vagaries of British tarmac.

The ride is taut, but there’s real control, the GT2 RS riding with sophisticated composure, allowing you to really enjoy the huge performance on offer. There’s a wealth of grip from the Michelin Sport Cup 2 tires, traction as well mighty, though there’s the suggestion of playfulness when you start pushing a bit harder. What is so beguiling is the steering, it’s right up there with the best setups on a modern Porsche. There’s decent weighting to the wheel, the response sharp, accuracy unfailing. Aided by the rear-axle steering, the GT2 RS’s nose is about as faithful on turn-in as you’ll get in a modern, road-going 911.

Combine that brilliant steering with the chassis ability on UK roads, and it’s not the performance of the GT2 RS that’s the highlight of the experience, but the ability to exploit it. In that regard, it’s a sizeable shift for the GT2 RS, and not an unwelcome one.

If you’re in the marketplace for a GT2 RS, it’s inconceivable that you’ve not already tried to get one, and if you’re still pondering the purchase decision, then yes, of course you should buy it. Only drive it, enjoy it. Please, don’t stick it in the garage with no miles on it while you wait for its value to double. You’ve no longer got the excuse that it’s a little bit too much of a handful, either, as the new GT2 RS adds control and finesse to its brutal power.

Even so, if it were this or a GT3, I’d have the simpler, naturally aspirated car, not least because it’s about $150,000 cheaper. Of course, that’s not going to be a decision any GT2 RS buyer is ever going to have to make. They can have both. And they should.