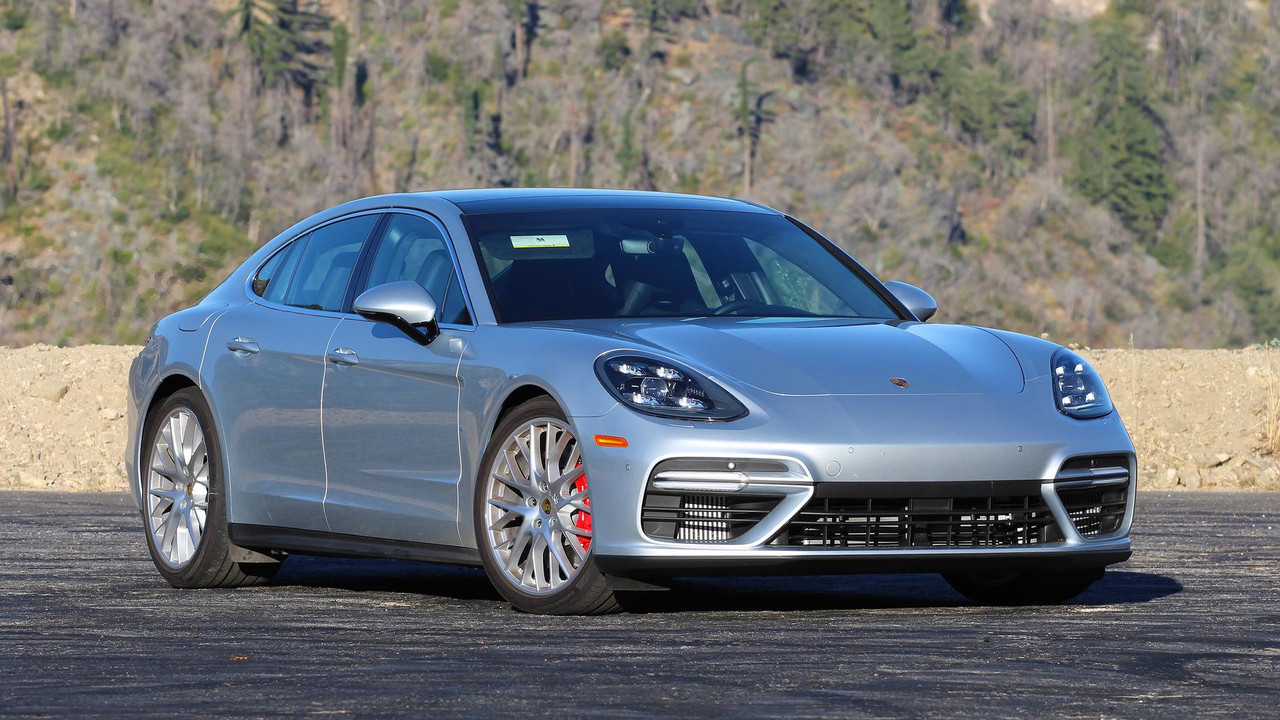 Even with four doors and the engine up front, this Panamera is pure Porsche, through and through.

I know I’m going to get a ton of hate mail for the title of this review, but damnit, I stand by that statement. Hunkered down in Sport Plus mode, barreling down Angeles Crest Highway north of Los Angeles, I’m convinced the car I’m driving is a four-door Porsche 911. There is a lightness and a tactility and a balance in this car that is unmistakably the sort of stuff you feel in great Porsche sports cars.

But don’t just take my word for it, ask the group of classic 911 owners I’m driving with, some of whom are struggling to keep up on the long stretches of back-and-forth S-curves that make up this fantastic portion of California’s Highway 2. Even as the group pulls into a turnout for photos and a coffee break, the 911 owners surround the Panamera with curiosity and admiration. Or maybe they just wanted to see how silly the wing looks when it opens.

Respect from other enthusiasts and a motoring experience that leaves me smiling days after my test drive? That’s Porsche stuff, alright. That’s the new Panamera Turbo.

Perfect powertrain. Porsche purists will undoubtedly bitch about the lack of a flat-six engine, not to mention the fact that the mill is mounted in the front of the car, but to them I very politely say: shut up. It’s 2017. Porsches have engines in the front – big, eight-cylinder, biturbocharged engines that make 550 horsepower, 567 pound-feet of torque, and allow this hefty, all-wheel-drive hatchback to rocket to 60 miles per hour in three and a half seconds. This engine is fantastic, with incredibly linear power delivery and no weird “turbo moments” of sudden boost. There’s no lag, no disruption, and no stopping the brute force of this sweet V8. Oh, and credit where credit’s due, the eight-speed dual-clutch transmission deserves praise for dispatching all that grunt with total precision.

The art of balance. Drive any of Porsche’s sports cars – 911, Boxster, Cayman – and you’ll know what great balance feels like. What impresses me most about the Panamera Turbo is how Porsche is able to offer this same dynamic in a car that’s so much larger and has its engine up at the front. The nose doesn’t dive or wash out under hard braking and turning. Likewise, the rump stays put while cornering hard – credit the aid of this car’s rear axle steering (part of the $5,580 sport pack) for added assist. And speaking of steering, the direct response and level of communication through the tiller is unmatched in the fullsize luxury space. This is the best-driving car in its class by a long shot.

Getting the styling right. So, confession: When the very first Panamera launched, I hated it. Hated it. But as more and more found their way onto the roads around me, I warmed to the design, and in this second generation, I have to say, I actually really like it (though I like that sexy Sport Turismo a whole lot more). The proportions are better, the slim taillamps and assertive headlights are both modern and elegant. Plus, riding on large (optional) 21-inch wheels, this Panamera Turbo has a great stance.

Proper cockpit. The Panamera’s interior is fabulous, with nice materials and a great design throughout. But the pièce de résistance is the updated Porsche Communication Management system, with its angled, flat panel surrounding the gear shifter, and the huge, 12.3-inch touchscreen above that. Rather than having dead buttons as constant reminders of all the options you didn’t order, the control panel just looks like a black screen under most lighting, with the backlit controls logically arranged and easily accessible. The infotainment display is bright and crisp, though I’ll say that both me and my front passenger are annoyed by the fact that most touchscreen controls go into a complete lockout function the moment the car starts moving.

Don’t forget, it’s a hatchback. The Panamera’s shape is as much about function as it is form. There’s an ample trunk underneath that hatch glass, and if you fold the rear seats, you’re greeted with 46 cubic feet of cargo space. Home Depot, here I come.

Turbo car needs Turbo kit. For a car that starts at almost $147,900, it sure is missing a lot of stuff. As I scan the option sheet – one that’s been curated with a decidedly admirable amount of restraint – I’m wondering why the $1,200 LED matrix headlights or even the $5,580 sport package aren’t just standard equipment on this top-level, sportiest-version Panamera. Also curiously absent: sport seats, upgraded brakes (which this car could really use), and ventilated seats, among other niceties.

But it’s a Porsche, so… Throw enough money at it, and the problems go away. Every option you could ever imagine can be fitted to the Panamera, and can be all be color-matched or done up in carbon fiber or leather or whatever you want. You know the drill here, have a heavy hand while checking off option boxes, and the price will accelerate almost quicker than the Panamera itself. Here’s a $234,170 Panamera Turbo I just built, and that’s before going into all the accessories. You’re welcome, internet.