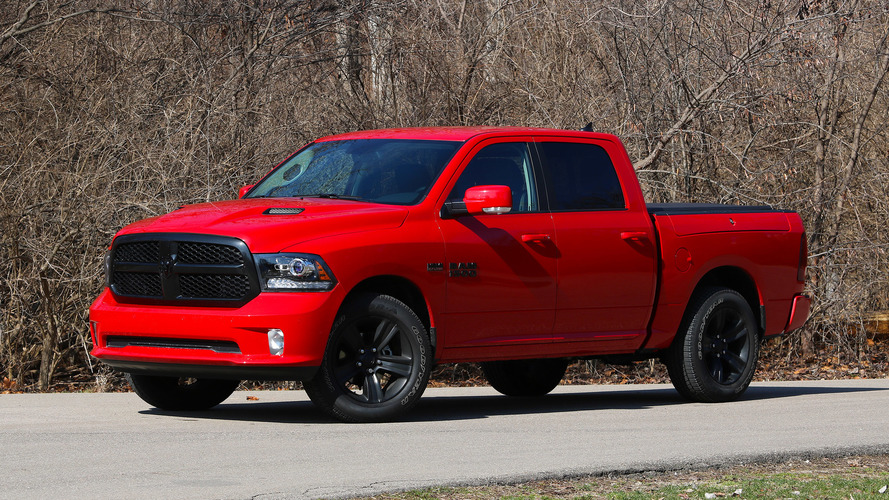 The Night Edition package brings a whole heap of brashness and attitude to Ram’s excellent truck.

This Ram 1500 can tow, haul, and off-road with the best of them, but there’s more to it than just truck stuff. This is a 1500 Sport equipped with the new Night Edition package, meaning there’s a bigger focus on curb appeal and performance than other versions of Ram’s light-duty truck. It’s a great toy for someone like me who doesn’t really need a truck and just enjoys a rear-drive vehicle with a V8. And it would also suit someone who really wanted a Dodge Challenger but ended up with a pickup. Most of all, though, it reminds me how much I like any version of the Ram 1500.

Big power from the big engine. Turbocharging is great, but so is the instant shove of a big Hemi V8. The 5.7-liter mill in this truck does not disappoint in the acceleration department, with 410 pound-feet of torque that can, if one were so inclined, light up the rear tires with an imprudent touch of the throttle. Or, you know, make short work of passing and merging.

Uncommon refinement. The Ram 1500 is my favorite light-duty pickup simply because it barely feels like a truck. The independent rear suspension exhibits none of the hop-skip-and-jump behavior of rivals over bumps, while the eight-speed automatic transmission is sublimely smooth in operation. Mopar exhaust aside (see below), the cabin is free from excessive noise intrusion from the outside world.

Raise me up, Scotty. The optional air suspension makes life even easier by lowering to an entry/exit height when you park – handy for someone like me who otherwise has to jump into the cab – and also lowering slightly at highway speeds to reduce aero drag. And if you were to encounter some rough terrain, you can raise the suspension for improve ground clearance.

It looks cool. Special-edition pickup trucks are a dime a dozen, but at least the Night Edition pack looks cool. Blacked-out badges and trim, black 20-inch wheels, a vented hood, and a black grille all lend this Ram 1500 more visual punch than standard versions.

Grumbling exhaust note. This particular truck had an optional exhaust and intake from the Mopar parts catalog, transforming its soundtrack. There’s a growl and rumble like, well, a Dodge Challenger, which fits with the rest of the truck’s bold demeanor. And yet...

It never shuts up. I love how the engine and exhaust sound when I’m accelerating hard. I hate how they sound when I’m cruising at a steady speed. The exhaust drones and burbles constantly; at 75 miles per hour on the highway, with the engine turning a leisurely 2,000 rpm, the noise is overpowering.

I’d like some more mirrors. Not for vanity, but for keeping tabs on the truck. Though this Ram has a blind-spot warning system, I’d love the ultra-convex spotter mirrors to which I’ve become accustomed on rival trucks. It just helps keep tabs on where this big beast is when squeezing through tight gaps.

It’s thirsty. Are you surprised that a Crew Cab truck with four-wheel drive and a V8 drinks fuel? Me neither. The EPA says you’ll achieve 17 miles per gallon combined, but in my use the trip computer was pegged closer to 13-14 mpg. Budget accordingly, especially given that this one has the optional 32-gallon tank and will quickly swallow a whole lot of unleaded at the pump. The Night Edition treatment is also available with Ram’s 3.6-liter V6, which returns 19 mpg combined in EPA testing for 4x4 models.

Can’t (easily) touch this. There’s no disputing that the Ram 1500’s 8.4-inch Uconnect infotainment system is excellent: Quick to respond, easy to use, hugely legible at a glance. What’s not so great is that it isn’t canted toward the driver, so from my vantage point, the screen seems distant and the right-hand edge looks like it’s pointed away from my line of sight – an optical illusion and a mild complaint, but noticeable all the same.

Noisy locks. This, too, might seem like a petty complaint until you hear it a few dozen times. That the Rambox and liftgate lock and unlock with the keyless entry system is supremely useful and secure. That their operation is a loud thunk gets old when you hear it every single time you get in or out of the truck.