It fits with rumors about the new truck using a twin-turbo V6.

The latest teaser for the 2022 Toyota Tundra puts a focus on the pickup's new engine. The image and video don't show much of it, though. Unfortunately, the company is telling us even less.

"The next generation of heroic iForce performance is ready to power the all-new Tundra," Toyota says in its brief teaser. There's a bit more to see in the video, though.

For example, there are three embossed sections on the left side of the engine cover. This could be a way of denoting three cylinders per bank, meaning the powerplant is a V6. There's already a strong rumor about the pickup adopting a twin-turbo 3.5-liter V6, so this would make sense.

Toyota North America Vice President of Sales Bob Carter already confirms that the new base engine makes more power and torque than the Tundra's existing 5.7-liter V8. It has 381 horsepower (284 kilowatts) and 401 pound-feet (544 Newton-meters) of torque. 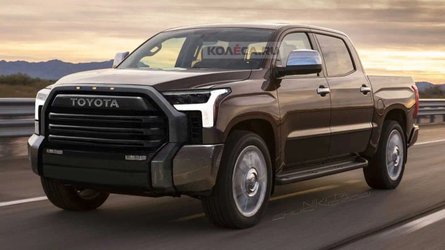 2022 Toyota Tundra Rendering Attempts To Peel Off The Camouflage 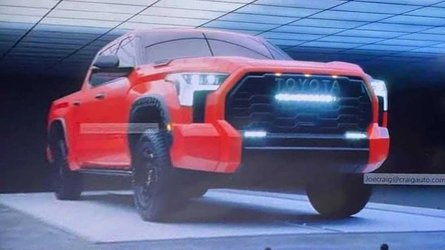 2022 Toyota Tundra Leaked Images Reveal The Truck From All Sides

The 2022 Tundra will be available with a second powertrain option, but Toyota won't divulge details about it. The speculation is that it's a hybrid or plug-in hybrid variant of the twin-turbo V6 engine.

The 2022 Tundra rides on Toyota's new TGNA-F platform. The company engineered it to be able to support electrified powertrains, lending credence to the hybrid rumors.

Spy shots and renderings hint that there might be an evolutionary design change. The headlights are the biggest alteration, and the DRLs now look like the letter T on its side.

Toyota isn't saying when it intends to unveil the new Tundra. Although, this teaser comes just a week after the last one. Given this release cadence, we wouldn't be surprised to see the truck debut in a few weeks.