With a sumptuous leather interior and a hybrid V6, the Tundra Capstone is as close to luxury as pickups get.

Half-ton trucks have been encroaching on luxury car territory for years. These days, you can spec a Ford F-150 or Ram 1500 with all the nicest leather and fanciest trim pieces, assuming you're willing to spend well north of $70,000.

The 2022 Toyota Tundra is no exception to that rule. But instead of parsing each individual upscale element into multiple options or packages, Toyota crams all the nicest stuff into one aptly named trim: the Capstone.

The Capstone model is new for 2022 and available on both the Tundra pickup and the Sequoia three-row crossover. With it, you get the highest-end leather available in the range, the chromiest styling, and all of the best technology packed into one single trim line. But is it worth an asking price of $74,000 to start?

Toyota is treating this Tundra like it's a Lexus with a bed, and the Capstone really does represent a significant step up from the next-best trim in terms of lavishness. Soft semi-aniline leather covers the seats and center console while a lovely matte wood treatment spans the width of the dash. There's some faux aluminum, too, on the steering wheel and shifter that looks good and helps further amplify that luxurious feel.

Toyota's new I-Force Max hybrid powertrain isn't exclusive to the Capstone model, admittedly. But the hybrid setup is standard on the top-end trim, and it is fantastic. The twin-turbocharged 3.5-liter V6 engine with hybrid assist produces 427 horsepower and 583 pound-feet of torque, which makes the Tundra genuinely punchy in a straight line.

And at low speeds, it’s just as good. The hybrid assist works in perfect unison with the gas engine. This powertrain is one of the smoothest setups of any half-ton truck and offers a seamless transition from gas to electric.

Again, the Tundra Capstone doesn't offer the same cloud-like-ride as some of the top-end Lexus products – but it comes pretty close for a truck. The independent double-wishbone front and multi-link rear suspension with coil springs is one of the top setups in the full-size truck segment. The ride is comfortable and soft, body roll is kept to a minimum, and you'll barely notice any uncomfortable feedback over bad roads – even with the Captone's 22-inch wheels. 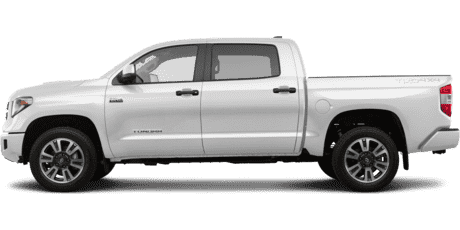 We all know trucks are getting bigger, but even more than the Ford F-150 or Ram 1500, the Toyota Tundra feels comically large. Tight parking lots require three-point turns and some city streets feel like they can barely accommodate the width of this truck. Even the biggest F-150s and 1500s (not counting the Raptor and TRX) don’t drive as lengthy or as bulky as the Tundra does.

The Tundra Capstone stretches out to 245.6 inches with the longest bed and 80.2 inches wide. The hood rises up high well into your sightlines, too, which makes frontward visibility an issue. And the bulging front accents on the hood make it hard to point the truck perfectly into a corner.

What’s funny is, for as large as the Tundra feels to drive in comparison to Ford and Ram, the second row is tighter here than it does in either of those two trucks. The bottom cushion extends out much further than you’d expect, making for less legroom. The Tundra’s 41.6 inches of leg space are still plenty spacious compared to most traditional vehicles, but that’s still about two inches down on the F-150 and almost five inches fewer than the longest 1500.

The two-tone white-and-black leather that’s exclusive to the Capstone trim looks lovely. But as you know, putting white leather on high-traffic touchpoints – like the center console armrests and the door panel armrests – is a recipe for disaster. That’s true in most vehicles, but especially in a truck meant for work. The white finishes in the Tundra Capstone are bound to get dirty quickly.