For now, the Raptor remains a V6-only truck.

UPDATE: Ford has confirmed that the Raptor R will have a V8. You can read all about it here. We've edited this story for clarity.

At first blush, the 2021 Ford F-150 Raptor takes the same approach as the standard F-150. For better or worse, it doesn’t look all that different or more exciting than the truck that came before, regardless of whether you’re studying its physique or taking in the cabin. But more than even the bread-and-butter truck Ford based it on, the third-generation Raptor hides major innovations.

The Blue Oval isn’t sharing power figures just yet, but with the 700-plus-horsepower Ram TRX, last year’s numbers for the Raptor – 450 hp and 510 pound-feet – might feel a bit weak if they indeed reappear for the 2021 model year. As for a more powerful rival to Ram, it sounds like one is coming next year with the Raptor R, which according to Ford will mark the return of V8 power to the high-performance truck line. Which V8 remains a mystery, but the GT500's supercharged 5.2-liter V8 seems like a good match for the Hellcat-powered Ram.

As for the V6, the new Raptor’s call will be all the stronger thanks to a new equal-length exhaust system. A “trombone loop” pairs with active valves, allowing the three-inch pipe to produce more (or less) sound as needed. Four distinct exhaust modes – Quiet, Normal, Sport, and Baja – should operate in the same manner as on the Mustang, changeable based on both the driver’s preference or the selected drive mode. Based on the samples Ford has released, this might be the first 3.5-liter EcoBoost V6 that sounds good.

Speaking of those drive modes, there are seven, doing all the usual things (adjusting transmission/throttle behavior, damper firmness, etc.). The drive modes, though, are an important way of taking advantage of the Raptor’s totally revised suspension. Never an area where this high-performance truck slacked off, the third-generation model goes well beyond either of its predecessors.

Ford completely redesigned the rear suspension, adopting a five-link rear with super-long trailing arms and a Panhard rod, the pair of which should deliver some impressive articulation. There are new Fox shocks in 3.1-inch bodies and massive 24-inch coil springs at all four corners, too, blessing the Raptor with huge levels of wheel travel – 14.0 inches in front and 15.0 in back.

You’ll only get those impressive stats with the standard 35-inch tires, but let’s be honest, we all want the obnoxious 37-inch optional tires, even if suspension travel falls to 13.0 front and 14.1 in back. Regardless of which size you go with, the rubber in question is the BFGoodrich KO2 and they go with one of three choices of wheels (including two beadlock-capable options).

But despite these changes, the Raptor’s evolutionary approach to, well, a lot of stuff is what’s going to reach consumers. That exterior design, despite the new hood, revised fascia, and tweaked tailgate is still perilously similar to last year’s truck (as we predicted). We like the especially different touches – the hood and its power dome, along with the side grilles, are big improvements. And we're okay with the SuperCrew being the only body style so far, too.

But if you were hoping for revolution, the Raptor doesn’t deliver. That’s true in the interior, too, where modest aesthetic updates blend in with the standard F-150’s overall design. You’ll get some orange accents here and there, a splash of carbon-fiber trim, and Shelby GT500-sourced paddle shifters, but that’s about as far as the cabin goes. 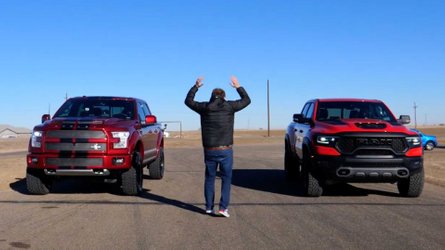 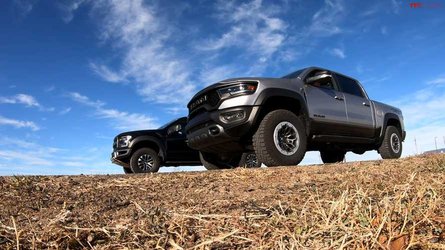 As Ford isn’t sharing horsepower or torque figures just yet, it comes as little surprise that the Blue Oval isn’t telling us how much the new Raptor will cost when it goes on sale this summer. The 2020 Raptor SuperCrew started at $56,440 (not including the $1,695 destination charge), so if the modest price increases for the F-150 are any indication, we’d wager the 2021 Raptor will remain a sub-$60,000 proposition to start. Look for much, much more on the new Ford F-150 Raptor in the coming weeks and months.