Multiple Ford executives took to Twitter to clear the air.

February 3 2021 is the day Ford unveiled its next-generation F-150 Raptor. Curiously, the official reveal didn't include details on performance despite the F-150 Raptor being a performance truck. Even more interesting was the flurry of social media activity that occurred after the debut, but the takeaway from those conversations was clear. The Raptor will launch with an EcoBoost V6, but a V8 version is coming next year.

This news was confirmed by multiple Ford sources online through Twitter, and Motor Authority also has confirmation. Motor1.com reached out to Ford for additional word as well, but for all intents and purposes, this is a done deal.

As you can see from the tweets, the harder-core Raptor will be called the Raptor R. At this early stage there is no other information, but rumors have been flying far and wide about the truck wielding a version of the supercharged 5.2-liter V8 from the Mustang Shelby GT500. The Predator V8 develops 760 horsepower for the muscular pony car, and if Ford aims to battle the Ram TRX, the Raptor will need such a power infusion. Another possibility could be a boosted version of Ford's 7.3-liter pushrod V8. With its compact size and big-power potential, it could be a surprise move from the Blue Oval.

For now, we know the 2021 F-150 Raptor takes an evolutionary step over the outgoing model. The twin-turbocharged V6 endures under the hood, presumably packing at least 450 hp though with the TRX and its Hellcat V8 walking tall, a power boost from the Blue Oval seems not just logical, but necessary. Perhaps of greater news is the Raptor's retuned five-link suspension that offers gobs of travel. 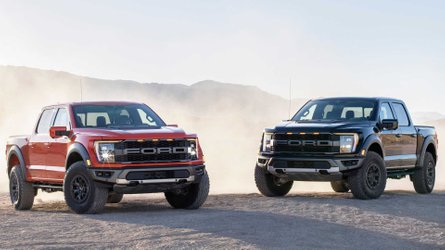 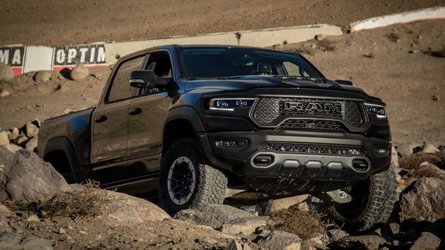 As for the V8-powered Raptor R, Ford tells us it will arrive in 2022 though we don't know if that's a debut date or an on-sale date. We'll update this article with more Raptor R information as it becomes available.