Toyota TJ Cruiser Production Version To Debut In May: Report 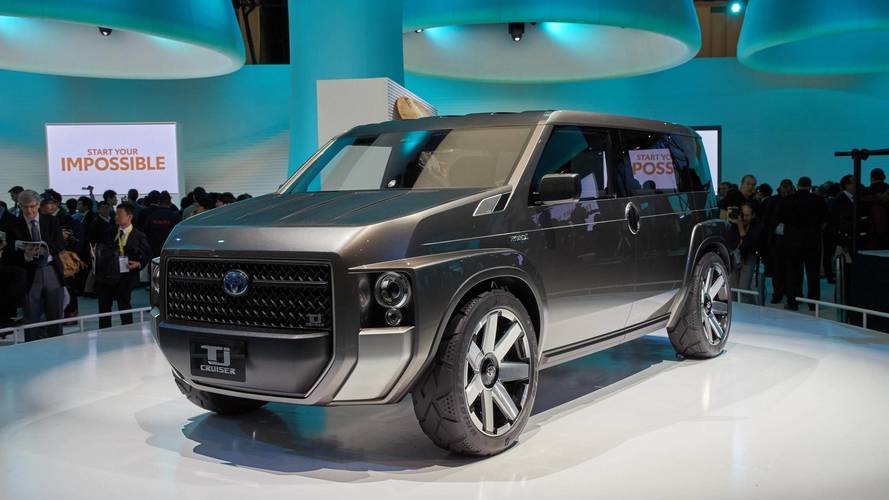 Don’t expect to see it in the U.S.

A production version of the Toyota TJ Cruiser, the boxy half van, half SUV concept previewed back in 2017, is heading for a May debut, according to Japan’s Best Car. A report that Toyota had okayed the TJ for production surfaced last summer. At the time, that report also said the boxy crossover(?) would debut in October, but Halloween came and went without a word from the Japanese automaker.

What We Know About The TJ Cruiser:

The production version that’ll debut in a few months will retain the concept’s basic exterior design. However, its packaging and contents will be drastically different from what the concept offered. How different remains a mystery, but the concept did have a ton of neat features like the fold-down seats, scratch-resistant paint, and large sliding rear doors. Then there were things like the elliptical steering wheel that’s unlikely to see production.

According to the publication, Toyota will retain the concept’s usability with the folding seats, expansive cargo area, and sliding doors. There’s no mention of the scratch-resistant paint. Toyota will also allegedly offer the concept in two- and three-row configurations, though don’t expect to stretch out in the third row.

Three powertrain choices – a 1.8-liter or 2.5-liter hybrid, or a 2.0-liter gas engine – will pair with a continuously variable transmission. Front or all-wheel drive will be available with Toyota borrowing the AWD system from the RAV4, which the TJ Cruiser will slot below in Toyota’s lineup.

Sadly, none of the reports of the TJ Cruiser say it’ll come to the U.S. For now it sounds like Toyota will keep the boxy runabout in Japan. When the TJ Cruiser debuted over two years ago, the concept-like exterior hid a production-ready-looking interior. If the TJ Cruiser debuts in May, we hope it keeps its funky, boxy attitude. The industry has changed a lot since 2017, and while boxy automobiles aren’t in style anymore, maybe Toyota can bring them back.