They should be around for at least another decade.

With talk of an automotive future filled with electric vehicles, it's easy to worry about losing the visceral feeling petrol-powered cars exude. EVs are proving to be stellar performance vehicles, often outperforming gas-powered competitors. Automakers are flocking to downsized engines and turbochargers to squeeze out more miles per gallon before the EV takeover; however, Porsche isn't ready to write-off gas-powered engines nor is it willing to dispose of the naturally aspirated engine and manual gearbox yet either. 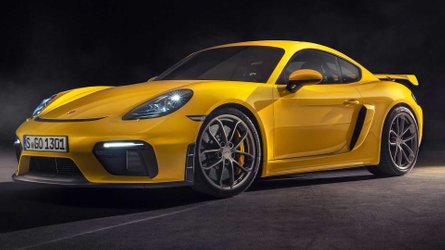 Andreas Preuninger, the head of Porsche's GT division, spoke with WhichCar.com at the launch of the second-generation Porsche 718 Cayman GT4 about how automakers ditching naturally aspirated engines and manual gearboxes are making a mistake. For Porsche, half of its GT cars sport a manual transmission – that's an impressive take rate. However, it's not the same for more mainstream automakers, and Porsche is in a unique position as a performance brand.

Preuninger captured the soul of the automotive enthusiasts in his interview saying cars can be more than just a means of transportation. He added they bring pleasure, too, and make you smile – and that's healthy. Preuninger's comments come as fans continue to rejoice about the Cayman GT4 sticking with its naturally aspirated engine and manual gearbox, which Porsche announced late last month.

And it's no performance slouch. Both the 718 Cayman GT4 and 718 Boxster Spyder use a new flat-six engine making 414 horsepower (308 kilowatts) and 310 pound-feet (420 Newton-meters) of torque. The mill is capable of propelling both from zero to 62 miles per hour (100 kilometers per hour) in 4.4 seconds.

One day down the road, a chapter of automotive history will close. The naturally aspirated engine will cease production followed by its forced-induction brethren. The manual gearbox will bid adieu, too, becoming relics of a bygone era. But automakers like Porsche aren't giving up yet, and it seems year after year, the German automaker somehow makes them both the naturally aspirated engine and manual transmission better than before. And, according to Preuninger, both should stick around for at least another decade. At least there's a chance gas-powered engines and DYI shifting will go out with a bang.