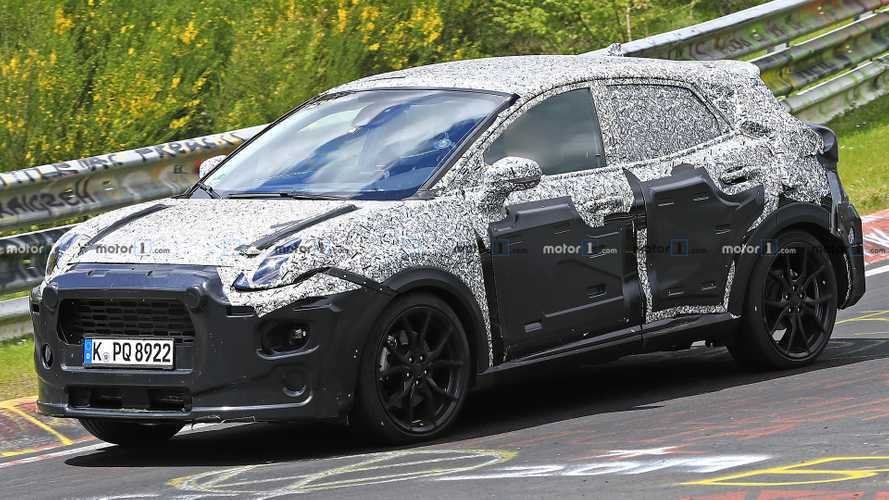 Ford's little crossover is getting a hotter variant.

The Ford Puma is the Blue Oval's upcoming compact crossover, and these spy shots appear to catch a sporty ST variant of the model on the Nürburgring. This one wears a whole lot of camouflage and black body cladding to conceal what makes it special.

Even standard versions of the Puma are still a rare sight, so it's hard to discern what makes this one different. The large wheels with double spokes are the biggest hint, and the prominent spoiler on the roof is another clue. The ride height also appears lower than the regular model.

The Puma has a lot in common with the Fiesta, and the ST variants would share a powertrain. The pint-sized hot hatch packs a 1.5-liter turbocharged three-cylinder with 198 horsepower (148 kilowatts) and 214 pound-feet (290 Newton-meters) of torque running through a six-speed manual gearbox.

Teasers (above) indicate that the standard Puma would also have similar styling as the Fiesta. Expect a wide grille with headlights sitting on top of the hood. An arching roofline would give the crossover a sleek look in silhouette. The rear offers 456 liters (16.1 cubic feet) of cargo space and can fit two golf bags sitting upright.

Expect the regular Puma to share the Fiesta's turbocharged 1.0-liter three-cylinder engine that makes 153 hp (114 kW). It likely would only be available with front-wheel drive.

All The Details On The Ford Puma:

Ford will officially unveil the Puma later this year, and the company will build it at the firm's factory in Craiova, Romania. The little crossover will go on sale first in Europe, and the ST will arrive later. Availability elsewhere isn't yet clear, but execs are reportedly ruling out offering the Puma in the United States.