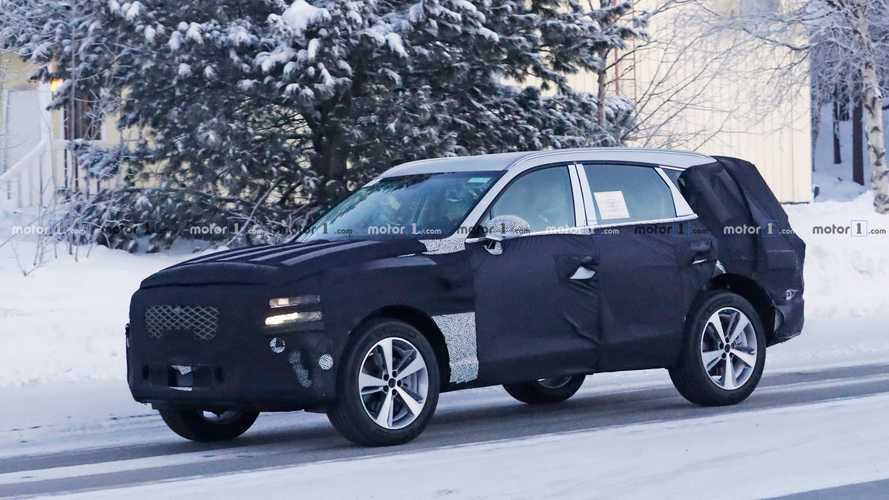 We've seen test mules and the GV80 concept, but this is a prototype of the production version.

Here’s our first look at the new SUV coming from Genesis. It’s the first foray into the segment for Hyundai’s luxury spin-off division, though it shouldn’t be entirely unfamiliar to Motor1.com readers. Genesis showed the world its GV80 concept vehicle back in 2017 at the New York Auto Show, and the production version is expected to share many of the design features.

Comparing the concept to the camouflaged prototype seen here, we can already identify some similarities. The mesh grille behind the camo seems a close match, though it doesn’t appear to stretch quite as low as the concept. The horizontal stripes in the camo are quite similar to the concept’s headlights as well, but that could be a clever deception. The light shining through those openings seems to emanate from a more traditional headlight design. Side sculpting could follow closely to the concept, too.

Here’s some additional food-for-thought. Last December an interesting video appeared on one of Hyundai’s YouTube channels, showcasing vehicle safety systems. The computer-generated clip featured an SUV that bore a striking resemblance – but wasn’t identical – to the GV80 concept. We speculated it might be an accidental leak of the production GV80, at least in a barebones CGI form. Curiously, that video has since been removed from YouTube, but not before we pulled several screenshots. Could this be what’s hiding under the camouflage of the prototype featured above?

Regardless of the shape, we’re expecting the GV80 to share its platform with the G80 sedan. That means it should be a rear-drive design with all-wheel-drive available, with similar engine options including a 3.8-liter V6, a 3.3-liter twin-turbo six, and a 5.0-liter V8 engine. In the highly competitive SUV segment, it should match up with the Audi Q7, Mercedes-Benz GLE-Class, and BMW X5.

Current thinking is that Genesis will reveal the GV80 sometime this year, but an exact date isn’t known. A good guess would be in the fall, debuting as a 2020 model.