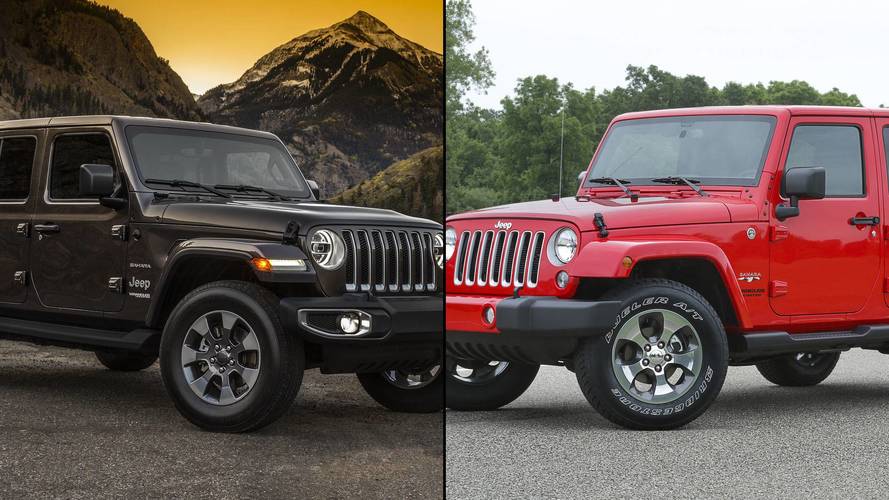 It still looks like a Jeep, but there are several important design updates.

The long wait is finally over, and we can now see how Jeep has evolved the iconic Wrangler for its new generation. Perhaps unsurprisingly, Jeep designers have not strayed too far from the traditional Wrangler shape. Yet there are big changes throughout the design that help modernize the SUV; the outgoing Wrangler, dubbed the JK generation, was first introduced way back in 2006.

Sadly, Jeep is only teasing us with a handful of photos at the moment, and we’ll have to wait until November 29, at the Los Angeles Auto Show, for a better look around the 2018 Jeep Wrangler. For now, though, this is how the all-new off-roader stacks up against its predecessor.

It wouldn’t be a Jeep without a seven-slot grille, and so the 2018 Jeep Wrangler continues that design up front. But it’s been tweaked and resculpted, so much so that the outermost vertical slats bend inwards to accommodate the big, circular headlights. Those headlights have a fresh look, too, with what appear to be ring-like outer elements that may serve as running lights. Incidentally, though, there are new horizontal running lights and turn signals mounted to the front fenders, replacing the stuck-on circular marker light look of the old Wrangler. (This also might make it trickier for the aftermarket to replace those front fenders willy-nilly.)

The final lighting change concerns the Jeep’s front end, where the fog lights are more elegantly integrated into the bumper, which itself is a more aerodynamically swept backward at each edge. That doesn’t mean function has gone out the window, as there are still two recovery hooks peeking up from that bumper.

The Jeep’s windshield appears shorter in height and set back at a shallower angle than before, moves that will no doubt improve aerodynamic efficiency. The lower panels where the windshield meets the front fenders are tidier, too, with fewer exposed bolt heads; we’ll touch more on that windshield frame later on.

Also in evidence from this angle is a new character crease that starts at the side-view mirror and runs along the underside of the windows, providing a lot more visual interest than the old Wrangler’s rather plain body sides. But traditional touches remain: exposed door hinges, an old-school mechanical door lock protruding from the sheet metal, and chunky black-plastic handles.

In other respects, the 2018 Jeep Wrangler looks remarkably similar to its predecessor in profile. A new fender vent is noticeable, the rear fender has a slightly more rounded shape, and the C-pillar makes a more graceful curve as it connects with what is essentially the Jeep’s roof rail. But other design cues carry over, like the rugged exposed gas cap, external taillights, and the third brake light that sticks out above the spare tire.

While Jeep hasn’t yet shared any photos of the interior – although our spy photographers have given us a pretty good look – we can at least see from this photo that you’ll stick be able to get a traditional manual handbrake, a traditional lever-style transfer case selector, and a manual transmission. Hooray! Based on the spy photos, also look for a lot of interior electronics upgrades, including the latest Uconnect infotainment system and redesigned center-stack controls. But, sating purists yet again, it appears the center stack-mounted vertical power-window switches will continue.

We don’t have a perfectly corresponding shot of the outgoing Wrangler to show you, but it’s clear from a drone’s-eye view that the new Wrangler’s hood will get a mild restyling. The external latches and rubber stops (for lowering the windshield) will continue, but it appears the hood has new strakes to add some design interest, as well as vents that may be optional depending on trim level.

What else do we know?

These photos confirm we’ll see both a two-door Wrangler and the increasingly popular four-door Unlimited model for this new generation. Jeep’s own press release promises the model will have “improved aerodynamics” and “dozens of different door, top, and windshield combinations.”

As for what’s under the hood, rumors point to the Wrangler offering a 3.6-liter V6 and a turbocharged 2.0-liter four-cylinder. A powered soft top could be offered, and Jeep will have more than 200 dealer-installed accessories ready to go at launch. At some point down the line, we will also get a Wrangler Pickup from the factory.

When will we know more?

Full details and photos of the 2018 Jeep Wrangler will be revealed at the L.A. Auto Show on November 29. The new Wrangler should start production at the company’s Toledo South factory in Ohio by the fourth quarter of this year, meaning you should be able to buy one by next spring.