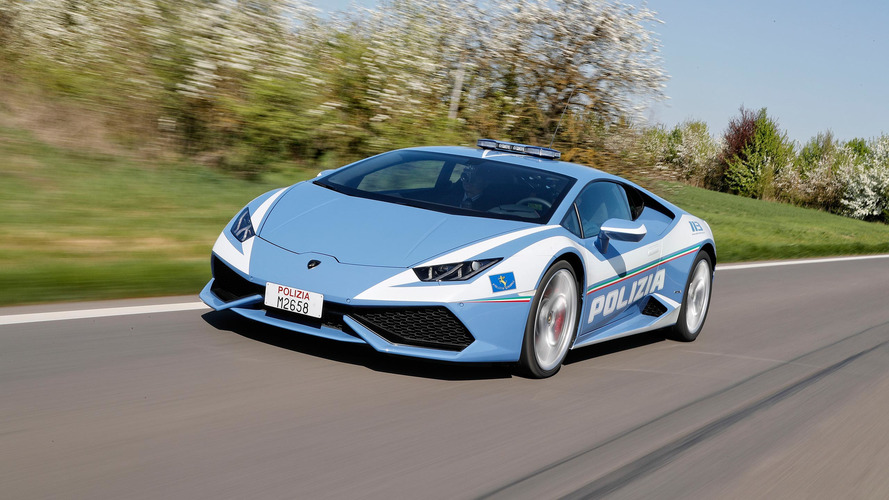 These cars have the serious job of transporting organs for transplants, but the job of driving one flat out still must be very fun.

As if one Lamborghini Huracán isn’t enough, the Italian supercar brand is now donating a second example of the supercar to the Polizia. The Highway Patrol in Bologna will put the coupe’s high-speed capabilities to good use in urgent situations as a first-aid vehicle and as a transporter for organs. Resumes will likely be flooding in for the job of flying down the Autostrade for this important ­job. According to the Polizia, the Huracán will also take part in normal police operations.

The Polizia's Huracán features a body in the Italian police’s custom shade of light blue with white letters. A stripe in the trio of colors from the Italian flag runs down each side of the supercar. The P Zero Pirelli tires also have blue-tinted sidewalls that match the body. Power still comes from a 602-horsepower (449-kilowatt) 5.2-liter V10 that routes to an all-wheel-drive system.

A bounty of custom equipment makes this Huracán perfect for high-speed police duty. Inside, there’s a tablet for helping law enforcement, and there's a bank of lights on top. Recording equipment and a video camera monitor what the cops are doing. For providing medical help, the storage area at the front has a refrigerated section for hauling organs or blood for transplant. An on-board defibrillator can potentially save people experiencing heart problems, too.

Lamborghini has maintained a fairly close relationship with the Polizia. In 2015, the company donated a Huracán to the Highway Patrol in Rome. Even before that, the Italian automaker gave a Gallardo to the police force in 2008, which replaced two previous examples of that model that did similar duty for the cops. Getting to drive one must be a coveted gig among the officers.

Rome/Sant’Agata Bolognese, 30 March 2017 – Automobili Lamborghini has delivered a new Huracán Polizia, the police version of its Huracán super sports car, to the Italian Highway Patrol in Rome. The keys were handed over to Interior Minister, Senator Marco Minniti, at the Viminale building by Stefano Domenicali, Chairman & Chief Executive Officer of Automobili Lamborghini. Also attending the ceremony was Chief of Police and General Director of Public Safety Franco Gabrielli.

The ceremony also provided an occasion to hand over to Rome police the 2009 Gallardo Polizia from the Lamborghini Museum in Sant’Agata Bolognese. The car will be on permanent display at the Highway Patrol Auto Museum in Rome.

The Huracán Polizia is used in highway patrol service, and for first aid and emergency medical transport. It sports the official colors of the Italian Police (Police Medium Blue), with the white areas and lettering specially executed to match the Huracán’s dynamic look. The livery is completed by a stripe divided into the three colors of the Italian flag, which runs along both sides of the vehicle. As is true for all Lamborghini cars, the Huracán Polizia is equipped with P Zero Pirelli tires, but their sidewalls are tinted in Police Medium Blue and were specially created for the occasion.

As is true for the standard model, the Huracán Polizia is equipped with an aspirated V10 that produces 610 HP, as well as all-wheel drive and a hybrid chassis made of aluminum and carbon fiber. These outstanding characteristics ensure extreme performance and maximum stability, even at very high speeds.

The passenger compartment of the Huracán Polizia has been given the latest advancements in high technology. The vehicle is equipped with an on-board system consisting of a tablet supplemented with a computer, recording equipment and a video camera. These systems are used to document police operations on the road.

In addition to its high tech equipment, the Huracán Polizia is of course fitted with the traditional array of police equipment, such as a gun holster, portable extinguisher, standard VHF police radio and hooks for retaining the classic red-and-white, hand-held stop sign used to stop vehicles safely.

An essential task of the Huracán Polizia is to provide medical assistance. To this end, the luggage compartment at the front of the vehicle hosts a special refrigeration system for the urgent transport of organs to be transplanted. To provide emergency first aid to the injured, the Huracán is also equipped with a defibrillator, which can save lives by inducing targeted electric shocks that restore normal heartbeat in case of serious arrhythmia or ventricular fibrillation.

In 2016, a number of transport operations were performed with the Lamborghini cars operated by the Italian Police:

- from April 7-9, 2016, the National Transplant Center of the National Institute of Health coordinated a series of organ procurement/transplant procedures between living persons. These procedures were linked together and involved five hospitals in the Lombardy and Tuscany Regions. The first chain of crossover kidney transplants performed among the living enabled six patients to donate and to be transplanted.

The crossover chain was made possible by a first Good Samaritan who "triggered" this domino effect and enabled five pairs of patients to donate and receive a kidney.

- on July 5 and 6, 2016, a second case of this type occurred in Italy, when the National Transplant Center of the National Institute of Health coordinated another series of organ procurement/transplant procedures among living persons. These procedures were linked together and involved five hospitals in the Lombardy and Tuscany Regions. The crossover chain of transplants among the living enabled three pairs of patients to donate and receive a kidney.

The Highway Patrol is constantly engaged in meeting the need for medical assistance. In 2016, there were 176 requests for assistance from all over Italy, requiring involvement from 462 police patrols. 120 patrols provided assistance to persons afflicted with special medical conditions, 111 and 74 transported organs and plasma/blood, respectively, 117 carried serums/vaccines and medications, and 40 teams were employed for other associated purposes.