BMW X7 caught with production body for the first time 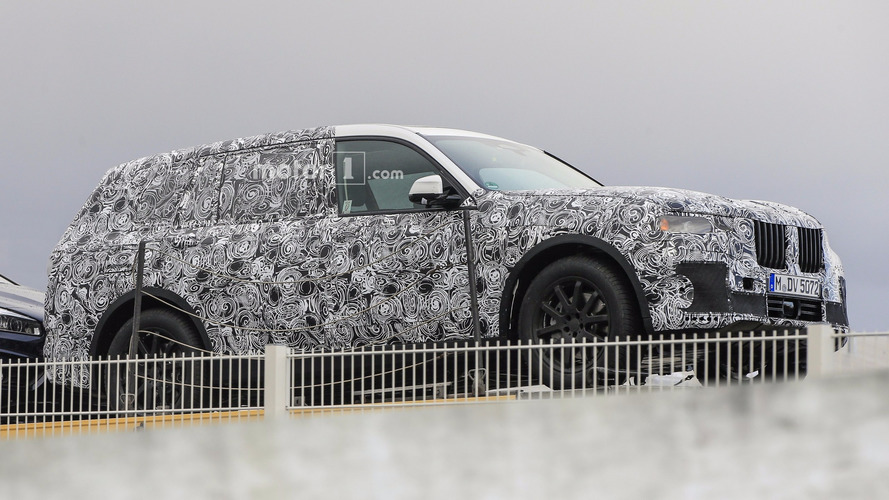 This is it, folks. Our eagle-eyed spy photographers have managed to immortalize a heavily disguised prototype of the BMW X7 hiding the production body for the very first time. As expected, it looks absolutely massive even though the images were captured from afar. While back in February 2015 we saw it as a 7 Series chassis testing mule with roof-mounted weights to simulate the extra bulk, this time around it appears to have the final body panels and a huge kidney grille likely visible from the moon.

The swirly camouflage does a good job at hiding the prototype’s design, but even so we are able to notice those headlights and taillights are only temporary and used during the early testing phase. Overall, it gives the impression of a larger X5, but it’s best to reserve our final judgment until at least some of the disguise will come off to reveal more of the metal.

Basically the SUV equivalent of the 7 Series, BMW’s forthcoming luxobarge will be built exclusively at the Spartanburg factory in United States and will ride on the CLAR platform. It’s going to host up to seven people inside its lavish cabin, but there are also plans for an even more luxurious four-seater version.

Since we’re on the subject of additional variants, BMW is allegedly toying around with the idea of giving the X7 the full-on M treatment, but even if approved, it won’t come sooner than 2020. If an X7 M won’t actually happen, recent trademark fillings have shown Alpina will most likely prepare powered-up XB7 gasoline and XD7 diesel models.

It’s too soon to talk about prices, although you can imagine the X7 is going to command a significant premium over the equivalent 7 Series, while the aforementioned ultra-luxurious model will be even more expensive.

Expect the three-row BMW X7 to be revealed at some point in 2018 and go on sale in United States as a 2019MY to take on the likes of Mercedes-Benz GLS and Range Rover. The four-seater derivative should follow shortly.