Driving The Toyota GR Yaris Prototype, A Rally Car For The Road 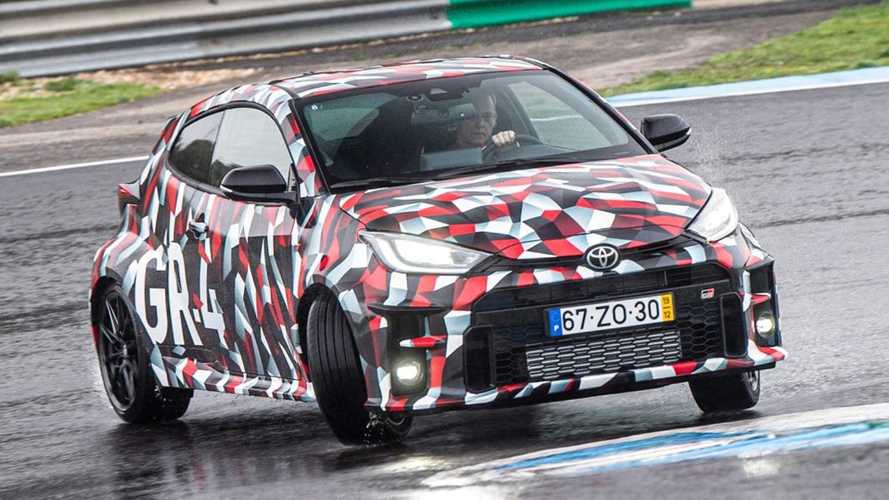 The first 250-horsepower, compact, all-wheel-drive hatchback in a long time. And we couldn’t be happier.

Homologation specials have a close relationship with racing. Over the years, regulations (from rally racing to road racing) imposed on manufacturers require them to produce a certain number of road cars, very similar to the racing ones, per year in order to homologate them for the track.

Clear examples of this are the Lancia Delta S4 and the Lancia 037. With regards to Toyota, the Celica GT-Four of the 1980s and 1990s also fell into that same category. But these days, the Japanese manufacturer pays homage to racing with an all-wheel-drive GR Yaris – something we haven't seen in decades. We drove the first GR Yaris prototype on the track and on the road, and here are our first impressions.

Toyota's performance arm spared no expense when designing the Yaris GR. The dramatic angles make this trim impossible to confuse with the base model, especially with its enlarged wheels, extended wheel arches, and the imposing squared air intake on the front fascia. The wheels themselves are 18 inches and hide a specially designed braking system, complete with red-painted calipers.

At the rear, there are two side exhaust tips from which the 1.6-liter three-cylinder engine rumbles, though, the diffuser has no real aerodynamic function. Full LED headlights and a CRFP (carbon fiber reinforced plastic) roof, lowered at the rear by almost 10 millimeters, complete the package together with aluminum doors and hood for weight reduction. The Yaris GR tips the scales at just over 2,600 pounds.

But let's get it on the track. We have to point out that this prototype is just 80-percent complete, and in the few laps available to us, we alternate between two models: the standard Yaris GR and the one with the optional Performance Pack. The Yaris GR with the Performance Pack has two Torsen mechanical self-locking differentials on front and rear axles instead of the limited-slip differential on the former model.

Let's start, however, with the engine. The real masterpiece of this Yaris is the turbocharged three-cylinder engine. Moved back in the engine bay by 21 millimeters to help better balance the weight, the turbocharged 1.6-liter three-cylinder engine in this prototype delivers more than 250 horsepower and 258 pound-feet of torque (final production numbers haven't been revealed). And the way this car accelerates makes rivals feel slow by comparison.

The real masterpiece of this Yaris is the turbocharged three-cylinder engine.

On both versions the GR Yaris, thrust is formidable. In fifth gear (there are six of them), the hot hatch reaches 130 miles per hour with embarrassing ease. The GR Yaris revs all the way up to 7,000 rpm. But after 6,000, that number is all but useless because power plateaus. All the fun is in the middle of the rev range where the car reacts like a volcano, always ready to explode out of the corner.

The way the GR Yaris accelerates is different from any other sports car of this type. And it's in that instance where you realize the car's lightness. The Yaris GR allows you to push it to its limit, but the car remains forgivable of even the most egregious mistakes. Also excellent is GR Yaris's balance. The car is very neutral and leaves it up to the traction to get it loose.

Unfortunately, we're unable to fully disengage the electronic nannies and appreciate the pure beauty of the differentials. Traction control reacts by cutting power (in the name of safety), forcing you to wait for it to arrive again after exiting the curve. The brakes are formidable, withstanding every stint without issue, and even if ABS arrives early, it doesn't interfere much with sensations under hard braking. On the contrary, in fact; you can lean on this system to provide braking well into the curve.

The gearbox also impresses us, it's quick and extremely solid. The problem here is the distance between the brake and accelerator pedals, which prevents heel-toeing. And the lack of an automatic rev-matching system (which could arrive on the production version) could wear out the components when pushing the vehicle on a track. Pleasant is the sound that invades the cockpit, but unfortunately, homologation rules and WLTP standards prevent the road-going model from sounding like a real rally car.

Does the GR Yaris have the right temperament for everyday driving? Absolutely.

A simple road test should have given us an idea as to the capabilities of this little beast in its natural habitat. Unfortunately, the sunset and the consequent darkness didn't afford us the opportunity to push it safely. So we decided to change our approach. Does the GR Yaris have the right temperament for everyday driving? Absolutely.

The engine is soft and smooth, and at low revs, the exhaust note from GR Yaris is discreet. This lets you travel on the highway at sustainable speeds without getting a headache. What's great is the suspension. Though still noticeably stiff on bumps, the hugely improved setup over the outgoing Yaris GRMN makes this car much more usable on a daily basis. Plus there are second-level driver assistance systems that don't interfere with the purity of the design but instead, just make the GR Yaris more usable.

Toyota's rallying history began in 1957. But it was the Celica TwinCam Turbo in 1983 that made a serious impact in Group B. In order for the Celica to race, Toyota had to homologate 200 road cars, and the company repeated that in the 80s and 90s with the Group A Celica. For the Celica ST 185, for example, the company needed 5,000 units. And for the ST 205, 1,000 units. Today, though, in order to homologate the racing version, Toyota has to sell a total of 25,000 cars. And that's good news for two reasons: the GR Yaris will not be a limited series, and perhaps prices will go down over time.

At the moment, it's still too early to talk about pricing. An official GR Yaris debut could happen on January 10 at the Tokyo Auto Salon. For now, let's say the price will range between €40,000 and €50,000 ($44,000 to $55,000 at current conversion rates). As mentioned, Toyota needs to sell 25,000 road cars to homologate the racing version. Therefore, no limited run is expected. Arrival on the market should happen by the end of 2020.