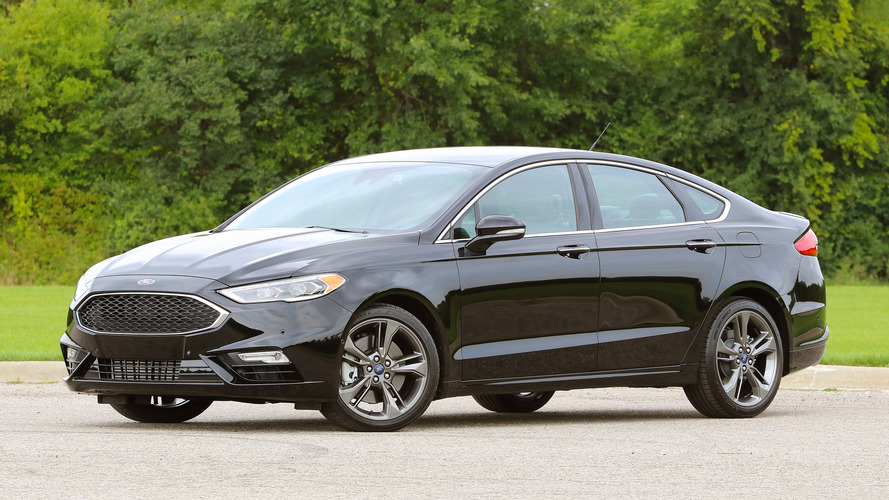 Oh, it’s a lot of fun. If you like that sort of thing.

The Ford Fusion V6 Sport has more horsepower and more torque than the Mustang EcoBoost. How you feel about that fact will pretty much determine whether or not you’re interested in the Fusion V6 Sport: Do you want way more performance than necessary in your midsize family sedan? This isn’t a full-fledged Fusion ST, but it’s got far more Sport in its blood than some rival ‘sport’ models that simply tack on fancy wheels and a spoiler.

“It’s not a performance monster, it’s not a car you’re going to take to a racetrack,” admits Ford Fusion chief program engineer Todd Soderquist. “But you’re going to have fun on backroads.”

To that end, Ford engineers stuffed in the 2.7-liter biturbo V6 from the Edge Sport, along with bits like Continuously Controlled Damping suspension, all-wheel drive, 19-inch wheels, a new front fascia with extra cooling vents for the intercooler, and four shiny exhaust tips. The result is a car that truly is fun to drive. But is this really the sort of family sedan buyers want?

The biturbo engine cranks out 325 horsepower and 380 pound-feet of torque, and there’s really nothing in the class that comes close.

As soon as I mat the throttle on an empty two-lane road, it’s clear the Fusion V6 Sport offers far more straight-line performance than any of its competition. The biturbo engine cranks out 325 horsepower and 380 pound-feet of torque, and there’s really nothing in the class that comes close. That power is delivered smoothly and consistently; the Sport hustles and easily feels like one of the quickest midsize sedans around. Though Ford won’t quote a 0-to-60 time, I’d expect it to just slip below the six-second mark.

When the road starts to squiggle, the upgraded suspension makes the Fusion even more fun to drive than normal. Switching the car to Sport mode firms up the dampers, sharpens the throttle response, and forces the six-speed automatic to hold lower gears for longer. It’s easy to keep a brisk pace on the rollercoaster-like rural roads near Pinckney, Michigan. The Fusion is grippy, precise, and easy to place through turns. It’s the sort of car that easily traces your line and flows from one corner to the next.

The Fusion is grippy, precise, and easy to place through turns. It’s the sort of car that easily traces your line and flows from one corner to the next.

This added pace has not come at the expense of everyday usability. To make the Fusion V6 Sport feel extra plush and luxurious, engineers equipped it with acoustic glass for the windshield and front windows, extra hood insulation, and an active noise-cancellation system. Yet sporty cars are supposed to sound sporty; what’s the point of that quad-tip exhaust if you never hear it? So in Sport mode, the car’s computers turn down the noise cancellation, and pump a little extra engine noise to the cabin. It’s the best of both worlds: a quiet freeway cruiser and a growling backroad machine, even if the noise is hardly realistic.

Ford also paid attention to keeping the ride comfortable with anti-pothole technology. Sticking 19-inch wheels with low-profile rubber on a car like this is typically a recipe for jarring impact harshness and frequent flat tires or bent rims; it’s hard to soak up road imperfections with this type of rolling stock. But the clever dampers can avoid that by “holding” a wheel above a big pothole, preventing both shock to passengers and wheel damage.

It sounds like a gimmick, so I aimed the Fusion’s front-left corner at a massive crater near the Motor1 office to test it out. The Fusion’s wheel simply hopped over the hole that sends shockwaves through other cars’ chassis. That it might prevent you being stranded with a flat is an even bigger bonus.

At just 20 miles per gallon combined in EPA testing, this is the least-efficient Fusion by a big margin.

As Ford’s Soderquist warned, the Fusion V6 Sport isn’t a full-on ST variant; there’s only so much handling magic to be found toward the limit. There’s a real heaviness from the nose that produces a lazy turn-in In fact, the car is heavy in general: it scales at 3,982 pounds, only 4 fewer than Ford quotes for the battery- and motor-laden Energi plug-in hybrid model, not to mention a whopping 510 more than a base Fusion.

Other signs that the V6 Sport isn’t one of Ford’s most hardcore performance cars emerge as you continue to hustle the car. Even in Sport mode, the rear dampers allow a lot of rebound that unsettles the car over quick crests and transitions. Plus, this tester’s all-season tires skitter and skate easily. Were it my car, I’d pay the $195 extra for the factory-installed summer tires.

I’d also pay dearly at the pump, as this Fusion sucks down premium fuel. At just 20 miles per gallon combined in EPA testing, this is the least-efficient Fusion by a big margin. That’s a big demerit for a car that still has to appeal to everyday buyers.

Ford says there’s a small but vocal subset of customers who wanted this exact car, for whatever reason, so the company obliged.

For all the fun I had tossing this car around like it had a Focus ST badge on the trunk, I still have existential questions about why someone would buy it. The Fusion’s existing 2.0-liter turbo engine is pretty gutsy as-is (245 hp, 275 lb-ft), and even non-Sport versions are more engaging to drive than rivals like the Altima, Camry, and Accord. And going for this 2.7-liter engine means big trade-offs in terms of price and fuel economy.

Ford’s answer, however, is that there’s a small but vocal subset of customers who wanted this exact car, for whatever reason, so the company obliged. “The number one unmet customer need … was that of a performance vehicle,” says Ford Fusion marketing manager Wade Jackson.

If you’re looking for this sort of car, there’s really nothing else like it on the market. Swift, stylish, and yet still remarkably quiet and comfortable, the Ford Fusion V6 Sport is an outlier of the best sort.