If you’re looking at these photos of the 2017 Nissan Armada and thinking, “Hmm, that sure looks familiar…” you’re not crazy. To paraphrase Troy McClure, you might remember it from such vehicles as the Nissan Patrol, or the Infiniti QX80. But this repurposed, more comfortable, Americanized Patrol is a good fit as a new Armada for the U.S. market, where fullsize SUVs are still hugely popular, even in the wake of super-high fuel prices. You can downsize your car, but you can’t downsize your family. If you need the full feature set of a big SUV like this one, the Patrol-based Armada definitely has what it takes to be competitive in this class of big guys.

It’s big and boxy, but certainly more attractive than the outgoing Armada – you can tell this one was actually designed in the current decade. But more than that, I find the more subdued styling and crisper lines to be better than the decidedly ugly looks of the Infiniti version. From every angle, the Armada is rough and tough, albeit with a few premium touches thrown in. That’s especially true on this Platinum tester with its 20-inch wheels, two-tone body color, and tastefully appointed chrome brightwork. 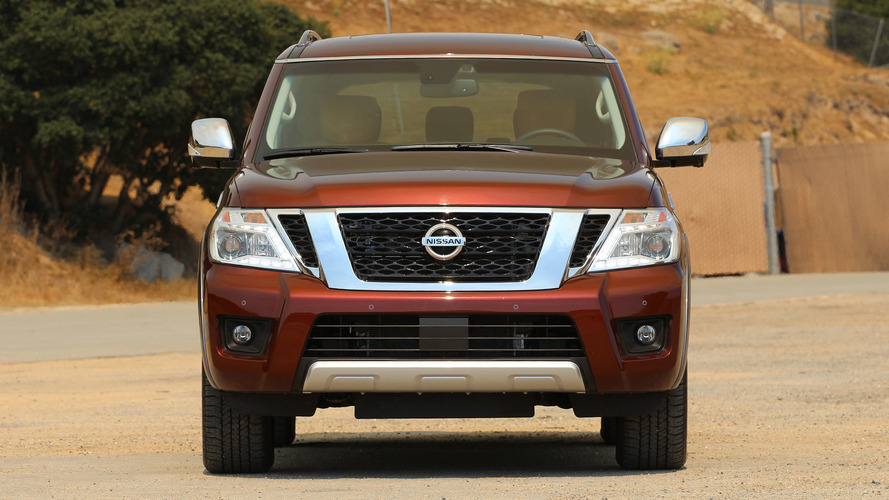 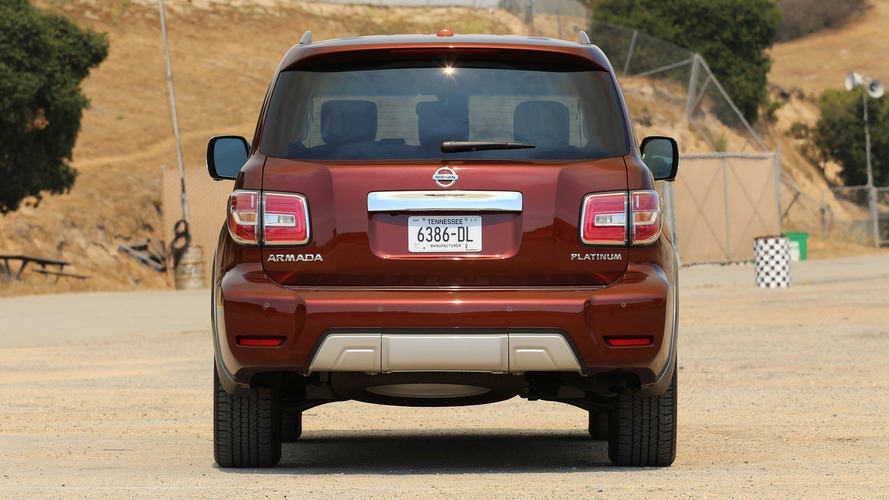 It’s big and boxy, but certainly more attractive than the outgoing Armada.

A similarly huge improvement is found inside, with a modern cabin that’s comfortable, stylish, and nicely appointed. Sure, you’ll recognize a lot of the Nissan/Infiniti parts-bin switchgear, but none of it feels particularly bad or out of place. Said another way, you’re basically getting the QX80’s cabin for a lot less money. Even this Platinum test car with leather, heated/cooled seats, navigation/infotainment, and more, should likely only cost around $65,000 – about the same as a base version of the Infiniti.

Most Armadas come with seating for eight, with an easily foldable second-row bench seat. Nissan touts its best-in-class headroom and legroom for the second row, at 40 and 41 inches, respectively – that’s not a huge leap over a lot of the competition (the Tahoe measures in at 38.7 inches for headroom and 39 for legroom), but I’ll concur, sitting in the Armada’s back seats is comfortable. Even larger passengers have no problem with ingress or egress, and not a single complaint is heard as far as spaciousness is concerned. Captain’s chairs are optional on the top-trim Platinum, with a removable center console that provides easy access to the third row. Speaking of which, the way-back is fine on headroom, but legroom is horrible. Kids should be okay on shorter drives, but a lot of adults will probably hate riding back there after too long.

That boxy, upright shape pays dividends as far as cargo-hauling. SL and Platinum models can he had with power-folding second and third rows (which are super slow to operate, by the way), and with everything flat to the floor, all Armada trims offer a maximum of 95.4 cubic feet of cargo space – ever so slightly more than a Chevy Tahoe (of course, the longer Suburban is more capacious). 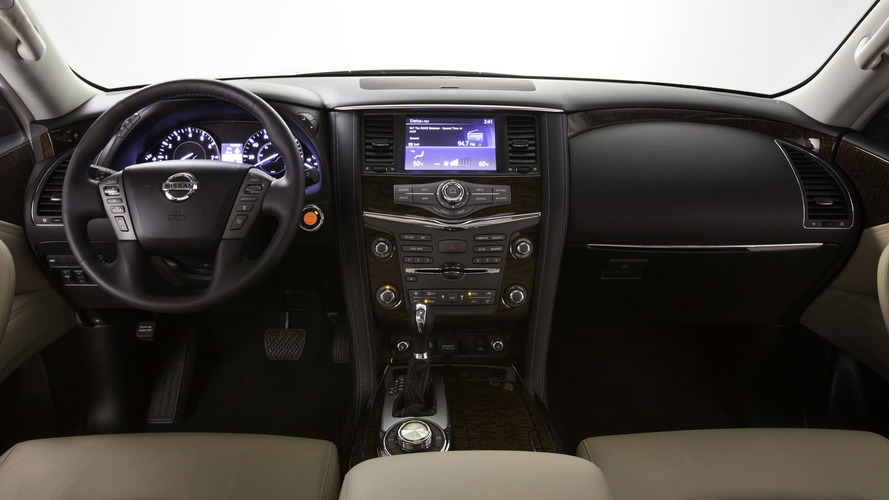 You’re basically getting the QX80’s cabin for a lot less money.

The only real issue inside the cabin is the infotainment system – a reminder that the new Armada is based on a six-year-old Patrol. All of the colors and graphics look like they’re a generation behind the curve, simply because they are. Chevy’s MyLink and Ford’s Sync 3 in the Tahoe and Expedition, respectively, are way better, both in terms of design and functionality. For Nissan, this seems like a massive oversight.

On the road, the Armada isn’t significantly better or worse than anything else in the class, but it’s a pleasant SUV to steer, nonetheless. Under the hood is Nissan’s revised “Endurance” 5.6-liter naturally aspirated V8, good for 390 horsepower and 394 pound-feet of torque. (Sidenote: Yes, this is the same engine as the QX80, but because the Infiniti version uses premium fuel, it’s rated at 400 hp and 413 lb-ft. Other sidenote: I secretly hope Nissan lets us have the Nismo version.) There’s more than enough grunt for moving off the line and passing slow Toyota Prii, and the free-breathing V8 sounds healthy and robust when you’re digging into the throttle. Both rear- and all-wheel drive are available across the full model range, with fuel economy only taking a slight hit should you choose the all-wheels-driven model. Even so, the best you’ll muster is 14 miles per gallon city and 19 mpg highway with two-wheel drive. Adding AWD reduces each number by one.

Off the beaten path, the Armada can handle a hill or dusty trail, but it’s not the same serious off-roader as the Patrol that's sold in other markets – this SUV has the softer, U.S.-spec QX80 tune. Yes, the optional four-wheel-drive system will still get you up a steep hill and can tackle much more than your average three-row crossover, but if you're looking to storm Dakar with Patrol-spec locking differentials or its trick (optional) active hydraulic suspension system, you're out of luck here in the Armada.

The Nissan is just as quiet and refined as its Infiniti sibling, and feels like your typical smoothed-out, truck-based SUV.

Coincidentally, I drove a QX80 about a week before attending the Armada launch program, and honestly, I bet if you asked me to drive the two back to back, I wouldn’t be able to tell the difference. The Nissan is just as quiet and refined as the Infiniti, and feels like your typical smoothed-out, truck-based SUV. The seating position is a little weird – plenty of head and shoulder room, but it feels like the seat bottom is too high at its lowest height. The steering action itself is a little light and devoid of any real feedback, but that’s about typical for the class.

A big note is how much quieter the 2017 Armada is compared to its predecessor. Riding in a 2016 Armada on the way down to Carmel from San Jose, there’s a good amount of wind noise making its way into the cabin. But while driving through Carmel Valley or along Highway 1 north of Monterey, even on a windy day, the cabin stays hushed. It’s an Infiniti-level premium experience.

Really, that’s what’s best about the Armada – you get all the goodness of the QX80 for far less money. Nissan isn’t worried about its fullsize SUV cannibalizing sales from sister company Infiniti, in the same way Cadillac isn’t worried about Escalade buyers discovering the Tahoe, so the overlap in quality and refinement here is mostly just a pleasant surprise for folks who go the Nissan route. 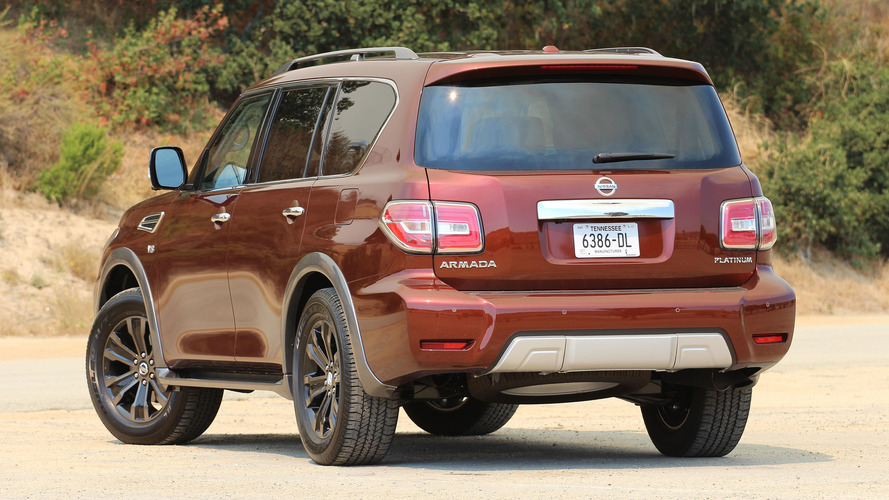 You’re getting an Infiniti-level product at a Nissan price, and folks in-the-know will think it’s cool because it's a Patrol.

Full pricing will be confirmed closer to the Armada’s on-sale date this fall, but the price of entry is $44,400 for a base, two-wheel-drive SV model. SL and Platinum trims move you up the ladder, and as I mentioned earlier, a fully loaded Armada should land somewhere around $65,000, which isn’t too bad. That’s about average for the class – Expedition and Tahoe fall just short of $70,000 all loaded up – and again, kind of a bargain when you consider the just-as-nice Infiniti retails for more coin.

That’s kind of the hidden secret about the Armada: You’re getting an Infiniti-level product at a Nissan price, and folks in-the-know will think it’s cool because it's (basically) a Patrol. It’s certainly a more interesting option than a Chevy Tahoe, and it’s better than the milquetoast Expedition or the Toyota Sequoia (yes, that’s still around). If your family and lifestyle don’t afford you the ability to downsize, the fullsize experience is lovely here in the Armada.