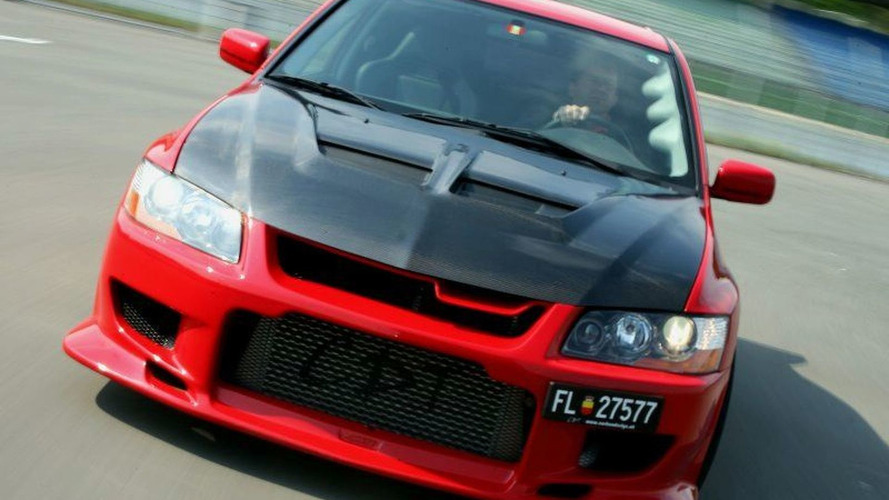 Honed on the ferocious World Rally Championship stage, the Mitsubish Evo IX has become an icon, famed for cornering ability that leaves the Japanese bullet train shamefaced, admitting its failure and chopping its finger off.

You’d expect a tech fest like the Carbon Design Technologies Evo IX to live in a cave on the outskirts of Tokyo, feeding on raw flesh and emerging weekly like Monkey, Pigsy, and Sandy to vanquish evil demons in a clumsy yet charming fashion. But it doesn’t, it comes from Liechtenstein, which boasts just 35,000 inhabitants, covers just 160km2 and counts dental equipment among its chief exports. No global superpower, then, but this car, on one stage at least, could change all that.

Honed on the ferocious World Rally Championship stage, the Mitsubish Evo IX has become an icon, famed for cornering ability that leaves the Japanese bullet train shamefaced, admitting its failure and chopping its finger off. But of course every road car, especially those in this price band, are a compromise, and CDT has tweaked the handling, boosted the power and done just about everything else.

K&W’s threaded and fully adjustable suspension, dropped almost to the deck for our test, joins up with beefy Cusco anti-rollbars on the front and rear. Lightweight 18x9” alloys from Volk Racing, the top end brand of giant Rays Engineering, and Pirelli P-Zero Corsas provide a turn-in so sharp it could cut the floor. It’s an aggressive, track-bound set-up that would shatter bones on a gravel drive, but on the road it’s unbelievable.

So good, in fact, that CDT felt we couldn’t truly appreciate this handling and so employed the services of a test driver who works with the likes of Bentley on new model development to show us the extent of its skills.

And on the 300-metre handling course on Hockenheim Circuit soaked by the water jets, even he could manage just three lurid powerslides before some heat got into the rubber and the car just refused to budge from the line. Even that brief flirtation with sideways fun took a full-on Scandinavian flick to induce and opposite lock wasn’t a factor, this machine steered on the throttle.

They were right, journalists would have looked like flailing muppets as we tried and failed to loosen the rear end. There’s almost too much grip and that explains why this car would murder most supercars in the wet, the dry too to be fair. At the Oschersleben circuit in a recent shoot-out carried out by German magazine Auto Bild Sportscars, the CDT Evo IX wasn’t just the fastest saloon, it even beat TechArt’s overblown 911 Turbo.

Lots of modern cars require relatively little skill to drive fast, but this car sticks like Velcro so even the Burberry-clad youngsters without the brains to imagine the consequence of heading into a bend too fast shouldn’t come to any harm. It is devastatingly quick and would make a mockery of many a supercar, though it might not be the most fun until you’re well outside the remit of the law and that’s more or less the only fault I could find with the car.

Awesome traction off the line and blinding straight-line acceleration are another Evo trademark, and this one goes even further. Not only will it hit 60mph in 4.6s, this car will nail the quarter-mile in 12.95s, less than half a second behind the Ferrari F430 that costs more than double the €62,275 that will get you behind the wheel of this beast.

Chip tuning adds most of the power, that and a new ‘Super Dragger’ exhaust from legendary Mitsubishi tuner HKS’s locker that doesn’t just boost the output, it also turns the turbocharged flat four’s burbling fart into an altogether more seductive noise – purely through volume. The Evo isn’t the sexiest sounding car in the world, but aficionados hear it a mile off and wait with thumbs up, like the local retard waiting to wave at the school bus.

Ram Air, a much-underused form of forced induction, also joins the fray to give that fraction extra power at high speeds and drag a few extra MPH out of the car in a straight line.

And all of that helps produce a terminal velocity of 170mph, and there are so few occasions in this world when more is required that it becomes a non-issue. Anything outside of the elite supercar class won’t even come close and all that speed comes despite the aerodynamic finesse of a house, too. The Evo IX just shouldn’t be able to break air this fast.

World Rally Cars rarely go beyond 140mph, what they need is traction and downforce, and the wings, various appendages and entire philosophy of the car is built with grip in all its varied forms in mind. A rally car can live without massive pace, without grip it is dead in the water and the various complexities of homologation mean that the basic form of the Evo IX has been dictated by rallying success.

But this is a road car, so CDT went to work on the aero side, providing a new front spoiler to sweep the air to the side and lower the ground clearance. It still comes with 390kg of downforce, a phenomenal amount, and its lighter too thanks to a carbon-fibre bonnet and boot. These new parts take weight from high up in the body, and they look damned cool – which may well be the point.

Braking was always a rally pre-requisite, but again it has gone to the next level in this particular instance with a set of six-piston Rotora calipers clamping on to 355mm discs on the front and four—piston units biting down on 330mm rears. When the whole car weighs just 1435kg, less than the great slabs of carbon-fibre and steel like the Lamborghini Murcielago, that’s plenty.

And the truth of the matter is this car would wipe the floor with the Murci, the F430, just about anything you care to put in its path. Yes, like Monkey himself, it’s not the prettiest super hero in the world, in fact it looks like its angered the Gods, but when you’re wiping the floor with supercars without even touching opposite lock, its easy to see the cult appeal.

CDT has taken the Evo to a whole new level of on-track performance and if they continue to produce dream machines like this, could just knock dentist’s drills off the top of the export list.