We go one on one with the most powerful AMG ever.

Editor’s Note: While Mercedes-Benz USA hosted a wave of the Mercedes-AMG GT Black Series drive for American publications, COVID-19 travel restrictions prevented us from attending. Instead, we assigned our colleagues at Motor1.com Italy to cover the drive. What follows is their account of the most powerful AMG ever, edited for clarity.

Since 2006, Mercedes-Benz has attached the Black Series moniker to its most powerful and exclusive AMG products. But while every Mercedes eventually spawns an AMG (except for the Sprinter and Metris – wouldn’t that be rad?), not every AMG gets the Black Series treatment.

The prerequisites for a Black Series candidate are fairly simple: two doors, and the ability to easily strip away weight, amplify the aesthetics, and seriously beef up the mechanicals. Because of those requirements, only few AMGs have gotten the honor. The first and only SLK Black kicked things off, but the cars that followed – based on the CLK, SL, C-Class Coupe, and SLS – established the badge's strong reputation. Now, it’s the turn of the AMG GT, the sportiest car on that list by far.

The AMG GT Black Series looks exaggerated and bad, and we mean that in the best possible way. We might argue designers went overboard, but each element of this styling overhaul has a purpose and/or received a blessing from the wind tunnel. Exposed carbon is a prominent element, contrasting nicely with our tester’s Magma Orange paint, on the fascia, hood, roof, side sills, and tail. In case the Halloween vibe didn’t make the GT Black’s case, the enormous active spoiler should. All told, the extra aero allows the Black to generate 880 pounds of downforce at 155 mph.

The AMG GT Black rides atop staggered-width wheels – 20 inchers in back, 19s up front – which contributes further to the aggressive, purposeful stance. The rear, therefore, is slightly raised, with the slight inclination of the four exhaust pipes adding to that impression. This car looks mean.

A three-pointed star might be on the nose, but make no mistake, this is a Black Series product and has the stripped-down, race-car-like interior to match that badge. The seat is very low, but despite that, the built-in roll cage, and huge rear wing, visibility is quite good. At the same time, the carbon-shell chairs are tight and constraining, and the padding is a bit hard, although we doubt you’ll notice or care about such things on the circuit. Our tester features the Track pack, a €7,500 option that adds the aforementioned roll cage, along with four-point harnesses and a fire extinguisher.

The suede-like Dinamica upholstery, meanwhile, is pleasant to the touch – you can also find it on the door panels and steering wheel. The infotainment is the same as lesser GTs, and like the AMG GT R, there’s a yellow knob just below the center console for fine tuning the traction control.

“Let’s go,” German DTM Driver Maro Engel says from the passenger’s seat, marking the clear and official start point of our time in the AMG GT Black Series. Just a few inches from my outstretched legs beats the heart of this car, a twin-turbocharged 4.0-liter V8 with 720 horsepower – it’s the most powerful AMG engine ever. And after crushing the throttle, that’s clear as the Black roars from zero to 124 miles per hour with incredible speed.

To achieve these power levels, AMG engineers fitted larger intercoolers and turbochargers and switched the 4.0-liter’s crank from a cross-plane to a flat-plane, reducing vibration and increasing low-end torque. This car packs 590 pound-feet of torque, which you’ll find on hand from 2,000 to 6,000 rpm. Also, and it goes without saying, but the move to a flat-plane has a dramatic effect on the engine’s singing voice, too.

To handle the added power and torque – up 153 hp and 74 pound-feet from the AMG GT R – AMG reinforced the seven-speed double-clutch transmission. Changes are still rapid and well timed, even at engine speeds where the increased torque would allow you to enter a bend with a spare gear in the bag.

The GT Black Series offers incredibly flat cornering, to the point that you can barely feel the 3,500-pound curb weight. That reduced curb weight came at the expense of the four-wheel steering, but that doesn’t really matter – the Black still agile and rapid in corners thanks to the excellent Michelin Pilot Sport Cup 2 R tires and the forgivable computer nannies. The carbon-ceramic brakes, meanwhile, are inexhaustible in their stopping power, while the pedal itself has a short stroke and offers excellent modularity.

Playing with the yellow traction knob is fun. The differences between the nine steps are small enough that you can slowly feel the AMG GT shaking off its chains. The rear gets looser, the car runs wider, and it all gets very, very fun. While this GT R party trick is fun, the Black Series comes with exclusive items to squeeze extra seconds out of lap times. Drivers can adjust not only the stiffness of the shocks, but they can make tweaks to the front and rear sway bars and add negative camber at both ends if need be. That’s in addition to the adjustable drive modes – you can really make the GT Black Series your own.

But despite these enhancements the GT Black Series feels amazing not for its acceleration or adjustability, but for the simplicity and naturalness that it offers to a relatively inexperienced pilot. You can go out with the nannies on and the suspension left to factory settings, but it doesn’t feel like the car is actively holding you back. It’s a delight to drive.

If The Black Is Too Much: 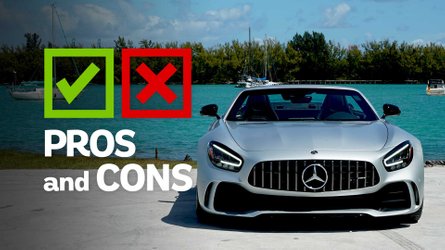 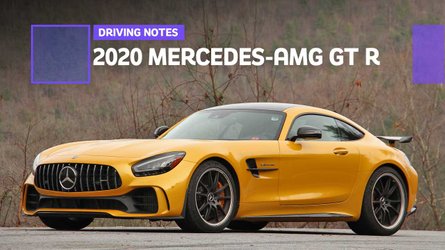