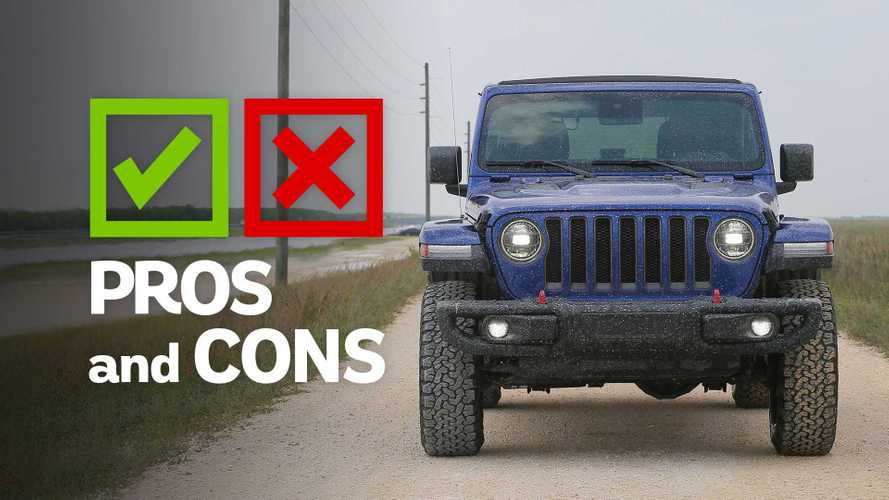 Diesel doesn’t quite seal the deal.

Now is a great time to be an off-road enthusiast. The Ford Bronco just made its triumphant return, Toyota’s TRD Pro line is more popular than ever, and Jeep is doubling down on the Wrangler by finally offering a diesel-powered version.

The 2020 Jeep Wrangler Unlimited Rubicon’s torque-rich 3.0-liter diesel option costs $4,000 though, and it doesn’t make sense for everyone, even with the improved gas mileage. Jeep also requires the $2,000 eight-speed automatic transmission with the diesel, leaving manual lovers out in the cold. But if you’re steadfast in wanting a diesel off-roader, the Wrangler is the only one this side of the Chevrolet Colorado ZR2 (at least until the Gladiator diesel arrives). With the diesel engine under the hood, the Rubicon is even more of a joyful, easy-to-use SUV that’s ready to tackle just about any adventure thrown at it.

Diesel Power For The People

With 226 horsepower and 442 pound-feet, the 3.0-liter diesel mill is a real workhorse in the Wrangler. For comparison, the standard 3.6-liter V6 offers 285 hp and 260 lb-ft, while the optional turbocharged 2.0-liter four-cylinder pumps out 270 hp and 295 lb-ft. None of the powertrains on offer crack the 300 hp marker, but the torque number differs greatly. This is the EcoDiesel’s biggest selling point.

Having driven all three engine variants, none of them qualify as fast. That said, getting going in the EcoDiesel is a much more forceful experience. The heartiest part of the powerband comes almost instantly, making excessive throttle inputs unnecessary. Beyond 4,000 rpm the Wrangler runs out of steam pretty quickly, but the scrumptious torque available is enough to bridge the gap.

During a light (by Jeep standards) off-road test, the EcoDiesel calmly conquered inclines without breaking traction or twitchy acceleration. With barely any throttle – less than five miles per hour – the engine thrives with fluid, consistent power delivery. Of the three powertrains, we prefer the diesel’s mannerisms for days spent off-road.

Tear It Down, Build It Up

This should go without saying, but one of the biggest pros with a Wrangler is the modularity. Tear the doors off, fold the windshield down, rip out the rear windows – you can undress a Wrangler according to the day’s adventure. This test car splits the room with one of its options, the $3,995 Sky one-touch power top. Think of it as the biggest sunroof you’ve ever seen; a massive canvas top retracts nearly the entire length of the roof with a simple press of a button. Put me down for loving this feature. In Miami where I tested the Wrangler, the weather goes from sunshine to storm often in a moment’s notice, so quickly taking cover is a wonderful convenience.

It’s easy to argue that four grand is way too much for a fancy sunroof, especially when the standard soft top retracts with ease and the hard top is removable as well. But think of the Sky power top as the happy medium between the soft and hard top; it provides better sound insulation than the former but doesn’t require a storage area to go convertible like the latter. A four grand option is considerable, but for some Wrangler lovers, this is the best of both worlds solution.

Come At Me, Bro

Opting for the Rubicon trim means that you’re serious about off-roading, and the diesel powertrain only serves to enhance the experience. Starting at $11,000 over the standard Sport Unlimited trim, the Rubicon is ready to travel way off the beaten path. With Dana solid front and rear axles, locking differentials, and tough skid plates covering the fuel tank and transfer case, the setup is ready for adventure. Beefy 32-inch tires and a specially tuned suspension help the Rubicon achieve even more in the dirt – or in this case, lots and lots of mud. And that’s before adding the torque monster.

During a light (by Jeep standards) off-road test, the Rubicon EcoDiesel calmly conquered inclines without breaking traction or twitchy acceleration. With barely any throttle – less than five miles per hour – the engine thrives with fluid, consistent power delivery. Conquering sharp inclines is a matter of breathing on the go pedal, as the Rubicon slowly but surely charges onward, without hesitation. Of the three powertrains, we prefer the diesel’s mannerisms for days spent off-road.

It’s not a typo – the 3.0-liter EcoDiesel engine earns a mark in the pros column as well as the cons. Admittedly, I am bad at math – that’s why I’m a writer. But even I can figure out that it will take quite a lot of highway driving to make up for the extra cost of the diesel engine. Again, the 3.0-liter EcoDiesel is a $4,000 add-on atop your desired Wrangler trim level, making it a pricey proposition. The payoff is better efficiency, especially on the highway. The standard V6 achieves 19 city, 22 highway and 20 combined, while the four-cylinder improves that to 21 city, 22 highway and 21 combined. Opt for the diesel and the Wrangler Unlimited returns 22 city, 29 highway, and 25 combined. In the real world, the diesel met its projected figures consistently, while past time spent with the V6 showed it to be less efficient than advertised.

If your daily commute is highway-centric, there may be an argument here, but the question is whether or not seven miles per gallon is worth the extra money up front. Not to mention, the diesel matches the other two powertrains with a 3,500 towing capacity, missing out on some extra brownie points.

Speaking of highway driving, that is a test that the Wrangler does not pass. This isn’t an issue with power – the diesel engine’s hefty torque is more than enough to get the big SUV moving. Rather, the Wrangler’s character at higher speeds is straight-up worrisome. With the Rubicon’s huge 32-inch tires, there’s considerable play in the steering. Noise bombards the cabin from just about everywhere; air whistles through the canvas roof, the dashboard emits a constant rattle, and road clamor is constant. This setup is still less noisy than the base soft top, with its plastic windows and looser door seals, but the dedicated hard top remains the best way to quiet down the Wrangler on the highway.

You shouldn’t expect the Wrangler to drive like an S-Class, but the Rubicon’s unrefined nature will likely wear down a daily commuter over time.

Jeepers creepers, this Wrangler costs $64,770. How on earth does this four-wheel-drive SUV get deep into luxury car territory? It comes with a massive options list, which accounts for the $23,000 jump over the Rubicon Unlimited’s starting price of $41,795. Rather than list everything in order, here’s a quick summary of what’s good and what’s not.

This Rubicon’s best add-ons are the killer $195 Ocean Blue paint, $1,695 8.4-inch Uconnect infotainment display, $995 black 17-inch wheels, and an $895 safety group which includes blind-spot monitoring and rear park assist. As for the $3,995 roof, the good still outweighs the bad, even for the money. It’s a fun addition, that makes the Wrangler even more versatile.

The $1,495 extra-durable leather gets hotter than the surface of the sun and $495 for keyless entry seems like a cruel extra for a car this expensive – ditto the $995 heated seats and steering wheel. Steel bumpers ($1,395) and body-color fenders ($995) are a matter of preference but don’t seem worth the cost to me with so many great aftermarket options available. The Rubicon feels right at around $50,000.

The World Of Wrangler: