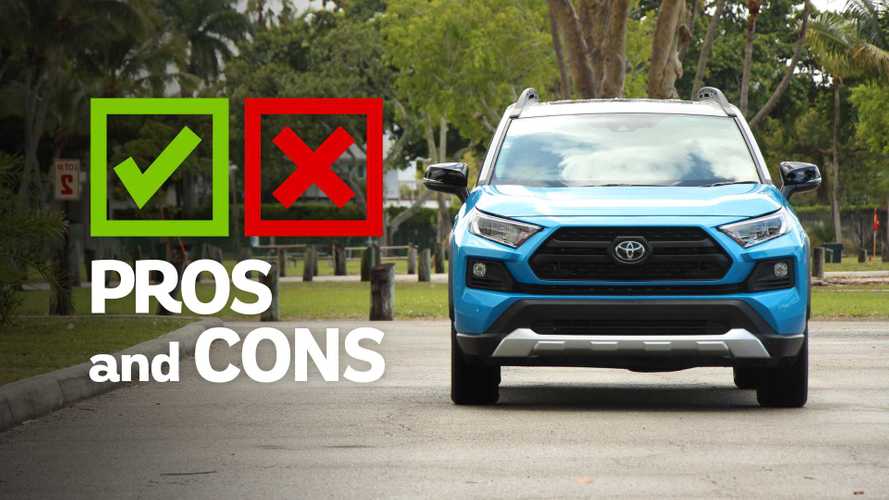 Toyota ramps up the RAV4 with more style and more personality.

The 2019 Toyota RAV4 has big shoes to fill. Its predecessor, even as one of the more outdated options in its class, sold exceptionally well in 2018. But the restyled and re-engineered 2019 Toyota RAV4 shouldn’t have a hard time finding the same success.

With eye-catching looks, improved dynamics, and more active safety equipment, the new RAV is a huge improvement from its predecessor. And with the addition of the more-rugged-for-2019 Adventure trim, it’s even more capable.

The RAV4 won't be taking on the Rubicon Trail anytime soon, but we appreciate the Adventure model's tough-enough cues. Plastic cladding covers the wheels and bumpers, there's a faux silver skid plate up front, blacked-out badges, standard all-wheel drive, and better ground clearance, which improves its soft-road ability (8.6 inches versus 8.4 on LE and XLE models). Those curbs in the grocery store parking lot won't know what hit them.

The inside of the RAV4 has storage everywhere. In the Adventure trim, little storage cubbies stand out thanks to their burnt orange hue and tough rubber coating. The driver gets an iPhone-sized cubby to the left of the steering wheel and an optional wireless phone charger lined in orange rubber ahead of the gear shifter. The front passenger, meanwhile, gets a large cubby directly in front of them, capable of carrying both a cell phone and an iPad. The rest of the dash wears nice white (faux) leather with orange stitching that feels almost Lexus-esque.

Typically crossovers in this class aren't that engaging (unless you count the Mazda CX-5), but we're smitten with the RAV4 Adventure's handling and feel. It responds well to corners, and is comfortable and composed on straights. It's buff enough to barrel through crosswinds without a ton of movement, and though the steering is a bit hefty for the class, it feels appropriate here given the macho nature of the Adventure trim.

Even in Sport mode (more so in Eco and Normal), the RAV4 is slow to respond to accelerator inputs. Apply throttle pressure, and it takes a second for the engine to get the car moving. Apply more pressure, and the RAV lurches forward unnaturally. In spite of its naturally aspirated engine, the RAV's throttle lag will fool some into thinking it's engine sports a slow-to-spool turbo. The 2.5-liter four-cylinder produces just 203 horsepower and 184 pound-feet of torque. Otherwise, the eight-speed automatic and four-cylinder engine work together cohesively.

The RAV4's infotainment falls into the category, “totally fine for the most part.” And with Apple CarPlay, it's mostly inoffensive. But it feels like a secondary thought in an otherwise really agreeable cabin. The screen looks tacked on atop the dash, littered with cheap buttons, and the graphics and layout appear outdated relative to what others in the segment currently produce. Not to mention it lacks Android Auto. It won't ruin your experience of this otherwise really likable crossover, but it needs improvement.

With almost every option, our RAV4 Adventure cost nearly $40,000. Ouch. It's a good crossover, but at that price, buyers might want to consider moving up to a Lexus. Both the UX and NX start at under $40,000 and have many of the same (if not more) features. Given their Lexus luxury pedigree, the UX and NX's cabins are a bit nicer, too. As lovable as the RAV4 is, $40,000 is a tough proposition.