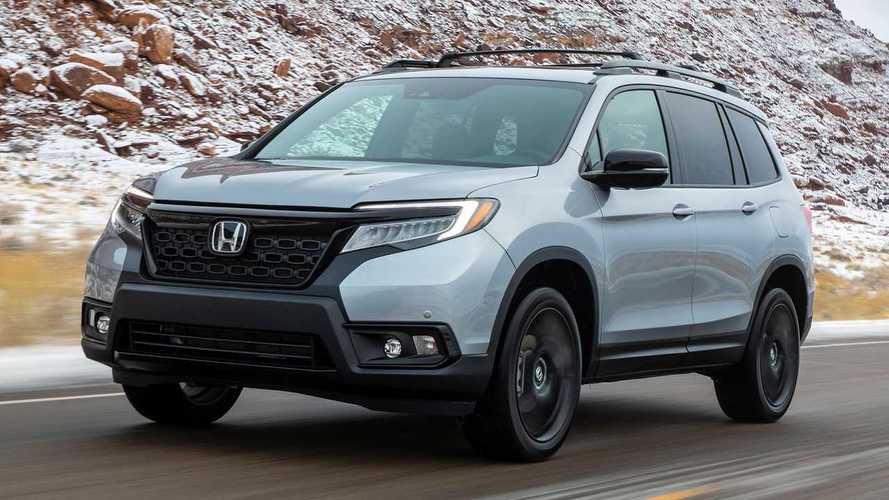 The 2019 Honda Passport is a family-friendly crossover that's comfortable, quiet, offers optional all-wheel drive, and comes loaded with standard safety features. Basically, it's exactly what you expect when shopping for a midsize sport-utility with two rows of seating, a roomy cargo area, and a Honda badge on the front grille. Except Honda is throwing crossover and SUV shoppers a curveball by pitching the Passport as a mix of everyday practicality combined with the adventurous off-road image associated with rivals like the Toyota 4Runner – two of the most off-road-ready SUVs on the market.

The immediate problem is that the Passport struggles to step out of the three-row shadow of its big brother, the Honda Pilot. That's because these two Hondas share a platform, powertrain, and have nearly identical interiors, at least from the rear seat forward. Primary differences include the absence of an optional third-row in the Passport, along with its slightly smaller overall size. Compared to the Pilot, the Passport is 6.2 inches shorter, thanks to less rear overhang at the back.

The Passport also stands slightly taller (up to 1.1 inches when fitted with all-wheel drive) and has a unique front grille that's trimmed in black plastic versus the Pilot's mostly chrome and body-colored front end. Honda equips all trim levels of the Passport with chunky 20-inch alloy wheels. These fill out the wheel-arches nicely and don't negatively impact (no pun intended) the smooth ride.

Serious off-roaders might be concerned about how these wheels will withstand rutted roads and unyielding rocks. Yet, during our test drive in the wild countryside surrounding Moab, Utah, the Passport didn't feel out of its depth when tasked with moderate off-road driving duty.

Would we thumb our noses at big-wheeled Jeep Wrangler and Toyota 4Runner owners to tackle the mighty Rubicon Trail in this Honda? Absolutely not. Honda isn't targeting the Passport at shoppers who need serious rock-crawling machinery (or are simply planning for an upcoming zombie apocalypse). But the Passport could at least outrun the walking dead, thanks to the power provided by its 280-horsepower 3.5-liter V6 engine. Coupled to a precise nine-speed automatic transmission, there is plenty of oomph for both city and highway driving.

There are four available trims: Sport, EX-L, Touring, and Elite. All but the range-topping Elite model come standard with front-wheel drive, leaving buyers the option to add all-wheel drive for $1,900. That's a substantial sum but, for many buyers, the added grip and all-weather traction is worth the extra cost.

While some all-wheel-drive systems take a noticeable chunk out of overall fuel economy, this isn't the case with the Passport.

While some all-wheel-drive systems take a noticeable chunk out of overall fuel economy, this isn't the case with the Passport. In standard front-wheel-drive form, the Passport returns an EPA-estimated 20 miles per gallon in city driving and 25 mpg on the highway. Adding all-wheel drive drops these figures to19mpgcity and 24 mpg highway. That compares nicely to some of its thirstiest rivals, like the Toyota 4Runner, which returns only 17 mpg city and 20 mpg highway (when equipped with four-wheel drive). But the Passport's economy is only mid-pack when squared off against its crossover competition, such as the Nissan Murano, Chevrolet Blazer, and Ford Edge.

Out on the sinuous and freshly paved roads surrounding Moab, the Passport is remarkably quiet and delivers a smooth ride that feels nicely controlled in corners. We couldn't bring potholes along with us to see how the Honda fares on less-than-ideal pavement, though we're pretty certain good driving manners would shine through.

When you really stomp on the gas, the V6 delivers solid acceleration – not to mention a nice engine snarl as the revs climb. Does that qualify as being sporty and adventurous, like Honda intended? While it's not going to challenge a Civic Type R for raw, visceral appeal, it's nice to know Honda engineers can instill a little engine magic into a mainstream crossover.

Last year, during our first drive of the larger Pilot, we found the full-size crossover's steering lacked much immediacy when getting a move on. In this regard, the Passport is a step in the right direction, with handling that's accurate and never feels artificial in terms of feel and feedback. The i-VTM4 all-wheel-drive system also proves seamless in the way it transfers power between the front and rear wheels; no matter if on paved roads or dirt trails.

Honda reps encouraged us to toggle between four different drive modes: Normal, Snow, Mud, and Sand. To be honest, we left the traction control management in Normal mode during the entire drive. When left to its own devices, the Passport easily coped with every road condition and didn't place a wheel wrong. On occasion, we did hear expensive-sounding scrapes coming from underneath our test vehicle when scaling some larger rocks. Of course, in a typical world where “off-roading” usually means parking once a year in a grassy lot at a local pumpkin patch, the Passport should do fine.

In a typical world where “off-roading” usually means parking once a year in a grassy lot at a local pumpkin patch, the Passport should do fine.

With its all-terrain limitations taken into consideration, let's turn our attention away from majestic vistas and dizzying canyons and focus on the Passport's spec sheet. Safety is a high priority in the midsize crossover segment, and Honda equips the Passport to take on this competitive field. The brand's Honda Sensing suite of safety features is standard across all trim levels and includes forward collision warning, automatic emergency braking, lane-keep assist, adaptive cruise control, and lane departure warning. A multi-angle rearview camera with dynamic guidelines and automatic high-beam headlights are also standard, while blind spot monitors are standard on all but the Sport trim level.

If you've spent any time in the larger Pilot, then the interior of the Passport will be instantly familiar. That's because the design and layout are identical. In fact, the only difference is the seat perforation pattern. The touchscreen infotainment system is within easy reach of the driver but, at times, hitting the right command is difficult while driving. The glossy surface and angle of the screen might be to blame, along with icons that seem one size too small. Thankfully, as we already noted with the new Pilot, Honda has finally gone back to equipping its vehicles with a dedicated knob for volume control.

For those with stuff to haul or things to tow, the Passport offers 41.2 cubic feet of cargo room behind its rear seats, while total towing capacity registers in at a respectable 5,000 lbs (with all-wheel drive). Surprisingly, the cargo bay initially looks shallow when you open the hatch. Blame the secret compartments for that load-lugging faux pas. Underneath the cargo floor are two hidden plastic storage spaces, which owners can remove for easy cleaning. The spare tire lives here too, unlike the Pilot, which positions its spare underneath the vehicle to accommodate its third row. If you need to haul things on a tighter budget, it's worth mentioning the smaller and less expensive Honda CR-V offers about 39 cubic feet of cargo room behind its second-row bench, which is almost on par with the Passport.

Since our test vehicle was a fully loaded Elite model, the cabin included luxury touches such as heated and ventilated front seats, a wireless smartphone charging pad, a 550-watt 10-speaker audio system, Apple CarPlay and Android Auto compatibility, an 8.0--inch touchscreen infotainment system, and leather seating surfaces. In this, the most opulent trim level, the Passport carries a starting price of $44,075 (including $1,045 destination fee). For comparison's sake, the Pilot Elite is noticeably pricier at $49,065. If you want every option, but don't need a third row, the Passport looks to be a good bargain. The entry-level Passport in standard Sport trim and fitted with front-wheel drive starts at $33,035.

The entry-level Passport in standard Sport trim and fitted with front-wheel drive starts at $33,035.

Fiscally speaking, this puts the 2019 Passport right in the thick of the midsize crossover battle. While it proved to have some true off-road credentials during our drive in Utah, we really can't imagine anyone cross-shopping this sensible sport-utility with something more rough-and-tumble, like the aforementioned 4Runner. To its credit, on paved surfaces, the Passport is much more refined. More direct rivals with a notable bias toward paved roads include the Ford Edge, Nissan Murano, Hyundai Santa Fe, two-row GMC Acadia, and Jeep Grand Cherokee, not to mention Honda's smaller CR-V and slightly larger Pilot.

With crossovers being such hot-sellers, it makes sense for Honda to fill this narrow gap in its range of offerings. The Passport offers the practicality you want from a Honda utility vehicle, and mixes in a hint of an outdoorsy image and all-terrain attitude.