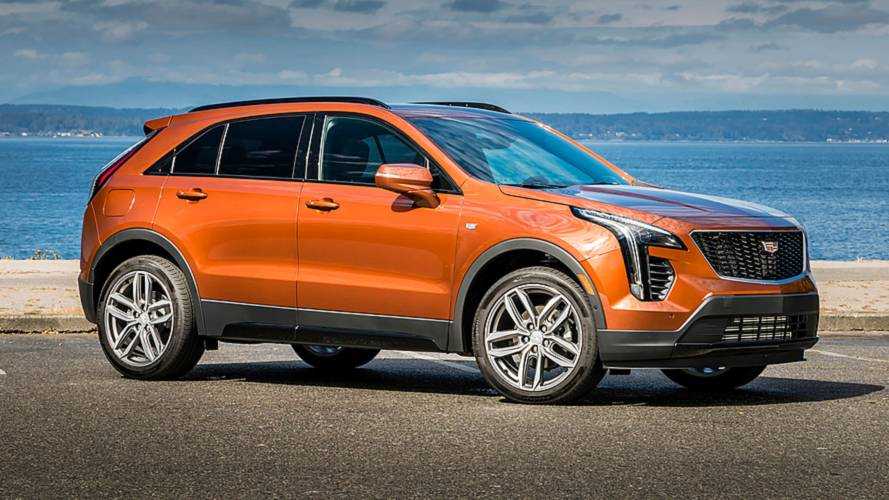 Cadillac joins the crossover bandwagon with its all-new model, the subcompact XT4.

Cadillac’s going through a bit of an identity crisis. First, it ditched Mom and Dad’s Detroit basement for a Manhattan high-rise. Then it showed up at the Oscars, strutting along those SoHo cobblestone streets in bespoke attire. And recently it said you don’t even have to drive anymore; the car will do (most of) the steering for you. This coming from the company that still develops its V-Series line, which includes the all-new 2019 CT6 V-Sport performance sedan. You know, the one that unleashes an estimated 550 horsepower from a brash twin-turbocharged 4.2-liter V8?

The future of the XT4:

Make up your mind, already.

Then again, you don’t survive a fickle industry for 116 years by doing the same thing over and over, do you? Adapt or die. And Cadillac is adapting to the market again thanks to a makeover plan that will see it unveil a new product every six months through 2020. It starts with a subcompact crossover – the XT4.

Yeah, I cried a little, too, while writing that – this is the brand that boasted the tagline “The Standard of the World” – but with compact crossovers attracting customers like moths to a flame, this is just good business. A quick search on U.S. auto sales shows that cars represented only four of the 10 most popular vehicles sold through August. When looking specifically at the luxury market, only two make the top-10 list: the Lexus ES and Tesla Model 3. The rest are crossover SUVs of varying practicality. Build a crossover, and customers will (hypothetically) come.

In order to keep up with its European competition, Cadillac focused on the engineering and performance aspects of the XT4.

In order to keep up with its European competition, Cadillac focused on the engineering and performance aspects of the XT4. The R&D team told me with steadfast conviction that making the XT4 fun-to-drive was their mission statement. (The team also emphasized that much attention was paid to the design, fuel efficiency, and technology of the XT4.) After cruising Washington state’s highways and byways in a couple of pre-production models, I can attest that the Cadillac XT4 is an enjoyable little luxury crossover. Well, most of the time.

I test drove a Sport and Premium Luxury model, both equipped with all-wheel drive. The all-new drivetrain consists of a turbocharged 2.0-liter inline four-cylinder engine mated to a nine-speed automatic transmission. With 237 horsepower and 258 pound-feet of torque, the XT4’s 2.0-liter easily bests the standard engines of its subcompact targets. But this doesn’t mean it’s fast. The quickest of the segment is still the X1, with a 0-to-60 mph run of 6.6 seconds. The XT4, however, is right behind at 7.0 seconds. Both of those figures are manufacturer estimates.

I first set out in the XT4 Sport, passing through downtown Seattle, into the rural foothills of King County, up through Tacoma, and toward Bainbridge Island. It was a scenic commute with elevation changes between three and 900 feet. Ride quality on Washington’s smooth roads was impressive, despite rolling on 20-inch wheels. The transmission shifted smoothly and unobtrusively, but I played with the Sport’s paddle shifters anyway – the transmission didn’t need my help, though. The nine-speed automatic’s programming did a great job at selecting the right gears for the right situations, so there’s really no need to futz around with the paddles.

The nine-speed automatic’s programing did a great job at selecting the right gears for the right situations, so there’s really no need to futz around with the paddles.

My tester was also optioned with the available Active Sport Suspension. Its continuous damping control adjusts damper firmness 500 times per second. Along with the twin-clutch AWD, the XT4 managed through the cozier corners with little fanfare. The suspension can be stiffened by selecting the Sport drive mode, which recalibrates the transmission shifts and steering feel, as well.

Overall, the XT4 is a dynamically pleasant vehicle to putter about in, as long as you avoid tapping on the brake pedal. Blame the Cadillac-first electro-hydraulic brakes, which neither I nor my driving partner found all that responsive or confidence inspiring.

During deceleration, the brake feel was good and showed no signs of fade in our 115 miles of hard driving. But anytime we actually had to come to a complete stop, the brakes required more pressure. And more pressure. And more. It was an unnatural amount of effort, to the point where I said little prayers every time I saw a stop sign, red light, or vehicle in front of me. I swear I’m not a late braker, but this particular vehicle made me feel that way.

Swapping out for an XT4 Premium Luxury halfway through the day gave a different impression. The brakes acted, well, normal, and I didn’t find myself mumbling Hail Marys. In fact, because I had become so accustomed to braking early to accommodate the Sport’s lack of braking performance, I found myself stopping about two car lengths ahead of where I really wanted to be while in the Premium Luxury model.

Speaking with Cadillac, the Active Sport Suspension should have zero impact on how the vehicle’s brakes react. We drove about 80 miles in the Premium Luxury model without experiencing the rather concerning behavior of our Sport vehicle. Because these were pre-production vehicles (not finalized for sale), I’ll give Cadillac the benefit of a doubt and chalk it up to a miscalibration. Otherwise, I’d be hesitant to recommend the XT4 – at least not the way my trouble car was spec’d.

Outside of that, the XT4 holds its own as a fresh take on what it means to be a modern Cadillac.

Outside of that, the XT4 holds its own as a fresh take on what it means to be a modern Cadillac. I won’t call it a baby Escalade because it doesn’t present a similarly big, bold, and beautiful stance. Instead, the XT4 resembles its closest sibling, the XT5. They share a similar profile, a smaller-sized Cadillac crest on the front grille, and a new L-shaped headlight housing.

The XT4’s design is sleek and clean. Cadillac’s designers didn’t add any crazy character lines for the sake of “personality.” Because of that, however, the XT4 isn’t immediately identifiable as a Cadillac when on the road. It also, strangely enough, looks handsome and distinctive in every color but the standard-issue Cadillac black.

Nevertheless, within the cabin, the XT4 is nicely appointed with soft-touch surfaces everywhere, and the sweeping design of the dash provides a sense of space. The standard eight-inch color touchscreen did seem a bit small, especially for a luxury crossover, but its operation was easy and intuitive.

Redundancies have been built in as well, allowing occupants to access infotainment features and other apps via the steering wheel-mounted controls, voice activation, touchscreen display, or rotary controller. Thankfully, buttons also remain for things that require frequent and quick access, like climate controls. Because no one wants to scroll or tap or speak through a million menus just to turn the air conditioning on.

At $35,790, the Cadillac XT4 starts at a higher baseline than its direct competitors, none of which have a base MSRP of more than $35,000. The fully-loaded Sport and Premium Luxury models I drove settled at $56,835 and $55,085, respectively. But in a segment that shows no signs of downsizing, Cadillac is making the right move. Hopefully, its entry hasn’t joined the crossover circus too late.

Update: A previous version of this text incorrectly stated that the XT4's chassis is shared with the Buick Regal and Chevrolet Malibu.