This subcompact luxury crossover would like to reintroduce you to Cadillac.

Now on its second model year, the 2020 Cadillac XT4 is the luxury brand’s way of starting off on the right foot with buyers. Its relatively affordable price, handsome styling, and up-to-date feature set should attract young folk who Cadillac hopes to keep with the brand as they age and graduate to larger, more expensive vehicles. 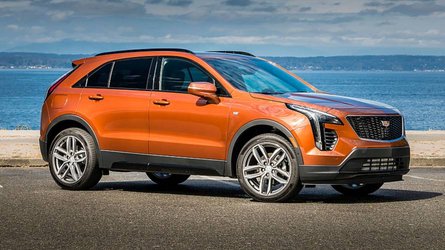 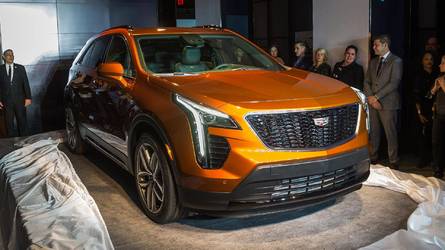 As a gateway vehicle to the rest of the wreath and crest lineup, the XT4 does its job well. That said, it’s up against a formidable field of subcompact luxury crossovers. Is being better than average enough for the XT4, then? At the very least, it’s a better foot to start with than Cadillac has had in awhile.

The Cadillac XT4 is a handsome subcompact crossover SUV, though its design isn’t as interesting or outright beautiful as some competitors like the Volvo XC40 and Jaguar E-Pace. Still, its exterior design is better than average in the segment and it’s the best looking crossover in Cadillac’s lineup.

The most interesting parts of the XT4’s design are its vertical headlights and tail lamps. In the front, these give the little crossover a unique face that’s instantly identifiable as a Cadillac. Vertical tail lamps aren’t uncommon in the segment (Volvo uses them, too), but look natural on the XT4 and evoke a bit of the brand’s history.

The XT4 is also quite large for its class. Its length exceeds competitors by over five inches in some cases, and it’s wider than most too. But its height is only average. These proportions give the XT4 a wide, low-slung look, which our tester’s optional 20-inch wheels further accentuate. The whole presentation is less evocative of crossover hallmarks like off-roading and adventure than it is of, say, a performance hatchback.

The XT4’s restrained cabin design features a refreshingly low button count, although drivers don’t have to rely solely on the 8.0-inch touchscreen for inputs. There are three nicely integrated rows of buttons and switches below the infotainment screen that operate the climate control system and some other functions. Likewise, there’s a simple rotary dial on the center console behind the gear shift that provides a second method of input for the infotainment system if tapping a screen isn’t your thing.

The rest of the dash shows off Cadillac’s choice of materials, which includes high-quality leather on the seats and steering wheel, though a faux leatherette material is used on the dash. We’re not as big fans of the glossy wood trim (carbon fiber and textured aluminum are also available), but the metal accents are a nice touch.

The only ergonomic foible we found inside the XT4 are the controls for changing the temperature. Located on a metallic strip of buttons, these controls appeared to be simple buttons – push the left side to increase the temp and the right side to decrease. Turns out they’re rocker switches, which require lifting them up to increase the temp and pushing down to decrease. A small nitpick, but the switches’ poor labeling lead to repeat offenses.

The XT4 is undoubtedly a luxury vehicle, as evidenced by its impressive seats. Our tester’s Comfort and Convenience package upgrades the front seats with eight-way power adjustability on both sides, as well as four-way power lumbar support and massage functions. They’re also both heated and cooled, while the rear seats get heat, as well. There’s plenty of passenger space inside the XT4 for four people too, but a fifth would make everyone in the second row uncomfortable.

By the tape, the XT4’s considerable length has given it impressive rear legroom of 39.5 inches, which bests the Volvo XC40 (36.1 inches), BMW X1 (37.0 inches), and Jaguar E-Pace (35.1 inches) by a considerable margin. As mentioned, though, the XT4 isn’t particularly tall, so its rear headroom of 38.3 inches falls short of those competitors, though by less than an inch.

Cadillac stole some cargo space to pay for that extra legroom, though. The XT4’s cargo area offers 22.5 cubic feet of volume with the rear seats upright and a maximum volume of 48.9 cu-ft with them folded. The aforementioned XC40, X1, and E-Pace all offer more maximum cargo space, with the BMW having nearly 10 cu-ft more than the Cadillac.

Lastly, the XT4 has very good manners when it comes to sound suppression. It’s quiet inside the cabin, with road, wind, and engine noise kept to a minimum. We thought our XT4’s larger wheel-and-tire package might increase the volume of road noise, but were wrong.

Cadillac bestowed the XT4 with a turbocharged 2.0-liter four-cylinder engine, like just about everything else in this class. Cadillac’s turbo-four produces 237 horsepower and 258 pound-feet of torque, which is above average for the class (of its seven competitors, two offer more power and four offer less).

At 3,876 pounds, though, the XT4 is also heavier than most. Still, there’s enough power available to keep the XT4 moving smartly and not feel like an impediment on the highway. This is not, though, one of Cadillac’s famous V cars, and no one should mistake it for a missile on the road.

Cadillac paired the engine with a nine-speed transmission that’s perfectly adequate and operates invisibly in most situations. However, its shift times are noticeably slow when you’re in a hurry, especially when operating the transmission in manual mode using the paddles behind the steering wheel. There’s also a dead spot when shifting from third to fourth gear where the shift happens but the gears appear to be so close in size that the engine’s speed hardly changes. It’s an odd experience when clicking through the gears quickly, and we bumped on it every time.

The XT4’s brakes, though, do deserve credit for how good they feel. This wasn’t the case in our First Drive review of the XT4, but in this tester, the brake pedal is just right – not too firm and not too squishy. And when engaged, the brakes feel both strong and ample, like their size and capacity are overkill for this little crossover.

In terms of handling, the XT4 is a little ponderous, which the oversized wheel and tire combo don’t help. It looks great, but that rolling stock comes with extra unsprung mass that affects the car’s dynamics. The XT4 just doesn’t feel light and spry like some other small crossovers, such as the XC40 and E-Pace.

Cadillac offers the XT4 in three trim levels (Luxury, Premium Luxury, and Sport), none of which come standard with a navigation system. Navigation requires selecting the Cadillac User Experience (CUE) with Embedded Navigation package for $1,500. Fortunately, our tester carried that particular option.

At this level, the XT4’s infotainment system stocks all the standard features that luxury buyers expect, such as real-time traffic information, Apple CarPlay and Android Auto compatibility, and an upgraded stereo from a brand name source – Bose, in this case. That said, these features come standard on many competitors, and should at least be standard on mid-level trims, such as our Premium Luxury tester, and up.

CUE has come a long way, though, and works well in this application with an 8.0-inch touchscreen. It’s nice that Cadillac lets you control the system via the touchscreen or rotary controller, and the basic menu structure is easy to navigate and relatively flat. There’s nothing too innovative in the infotainment system’s design, but there’s nothing wacky or fundamentally broken either.

Cadillac does offer a lot of tech features on the XT4, but none were present on our tester. Despite costing nearly $50,000 out the door, this particular car did not come with the XT4’s available wireless charging, power tilt-and-telescoping steering wheel, head-up display, 8.0-inch digital gauge display, or trick rear camera mirror. Those features require a couple of option packages that add thousands of dollars to the price.

The National Highway Traffic and Safety Administration has crash-tested the XT4 and given it an overall rating of five stars out of five. The Insurance Institute for Highway Safety, though, has not tested the XT4.

That said, only rear parking sensors are standard on the base model. The mid-level Premium Luxury trim and top-level Sport add front parking sensors, blind-spot monitoring, and rear-cross-traffic alert as standard equipment. The rest of the available safety equipment, however, can only be had by selecting a total of three option packages.

The Environmental Protection Agency has officially rated the Cadillac XT4 with all-wheel drive at 22 miles per gallon in the city, 29 mpg on the highway, and 24 mpg combined, which is average for the class. The XT4 requires premium fuel, though, and Cadillac offers no electrified powertrains for the XT4.

Being a luxury vehicle, the XT4 should carry a premium price tag. Its base price of $35,695, though, is right in line with most of the segment (only the Jaguar E-Pace starts considerably higher than the rest). The as-tested price of this 2020 XT4 AWD Premium Luxury model is $49,680, which, again, is in line with similarly configured mid-level trims from its competition.

What’s frustrating about the XT4’s pricing, though, is how little comes standard and how much nickel-and-diming Cadillac does to get you to spend more. The aforementioned safety features are a perfect example. Even on the most expensive Sport trim, only a few safety features come standard. To get the rest requires the Enhanced Visibility Package for $1,500, the Driver Assist package for $1,100, and the Driver Awareness package for $470. That equals a total of $3,070 for many safety features that come standard elsewhere, and in the case of the XT4, includes other features you’re paying for that you may not want.