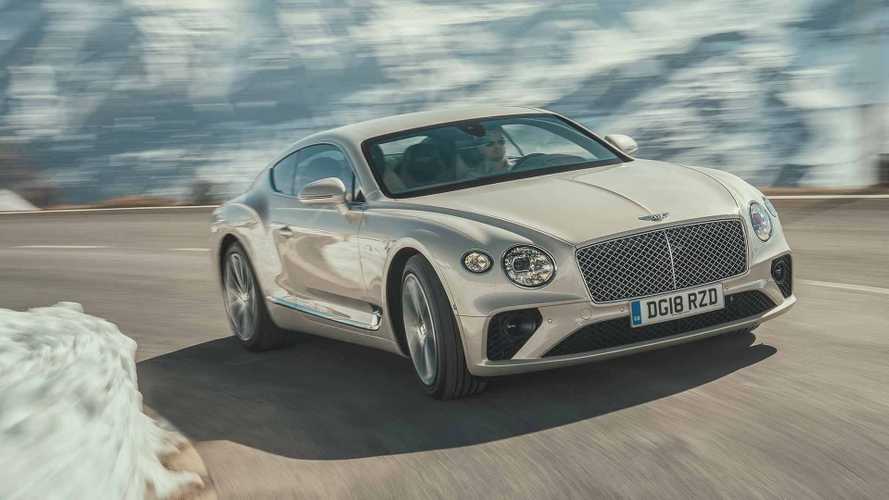 Sportier yet somehow even lovelier to drive, the new Continental GT would do Bentley’s namesake proud.

The views from the Grossglockner High Alpine Road are spectacular – when the low clouds recede, that is. Thirty miles of road are tangled up into 36 corners that snake up and down mountains near the Italian border, peaking as high as 8,215 feet amid the snow-capped peaks. It’s a helluva place to test out the 2019 Bentley Continental GT. Partly, yes, because a journey like this from Austria down through Italy recalls the “grand touring” types of trips for which this class of car was designed. But also because Bentley used this very mountain pass during development work to put its newest Continental GT to the test.

No surprise, then, that the new car doesn’t skip a beat on Grossglockner. Nor does it skip a beat anywhere else on my drive, where the Bentley luxury coupe feels improved in every way: compared to its predecessor, it is lighter, more powerful, quieter inside, sportier behind the wheel, and even more comfortable.

For lightness, Bentley managed to strip 176 pounds from the Continental GT, bringing curb weight to 4,947 pounds. Much of that mass was dropped by making more of the body from aluminum, as well as from improved assembly methods like increased use of structural adhesives rather than welding. That diet happens even though the new car grows by 1.7 inches in length and adds many new technologies.

There's more to read about the Continental GT:

The wheelbase increases by 4.1 inches because the front axle has been pushed 5.1 inches further forward. At the same, the engine has been pushed backward so the front-rear weight balance is much improved, from 58:42 to 55:45. But moving the 12-cylinder engine so far back wasn’t without its challenges: the front driveshaft now goes through the sump, so engineers had to notch the crankshaft lobes so the shaft would fit.

That engine is a heavily revised version of the hand-built, biturbocharged 6.0-liter W12. Output is up from 582 horsepower and 531 pound-feet to 626 hp and 664 lb-ft. It adds direct fuel injection alongside the prior W12’s port injection, and is an impressive 67 pounds lighter. An eight-speed dual-clutch transmission replaces the prior automatic.

Sixty miles per hour will arrive in just 3.6 seconds, with top speed pegged at 207 mph. To counter all that velocity, the car has the largest iron brakes (i.e. non-carbon-ceramic) ever fitted to a Bentley, with 10-piston calipers and 16.5-inch rotors up front, and four-piston calipers and 15.0-inch rotors in back. They look to just barely fit inside the 21-inch wheels.

While at full throttle the turbos whistle loudly like a heavy-duty diesel truck, yet the engine’s power delivery is anything but trucklike. It feels limitless, effortless, and easy. The long-travel throttle allows for meting out all that power precisely, but once the engine comes alive, it’s an absolute rocket. There’s low-end torque and top-end power for days, giving the sense that the car would happily stride on toward 207 mph were there only enough tarmac ahead.

The dual-clutch transmission overall feels just as smooth and supple in normal driving as the old torque-converter unit. It slinks around town and away from stoplights without much trouble. It does stumble when I start on a steep incline after ogling a view from partway up the Grossglockner, and an occasional driveline shudder is felt when the gearbox drops into top gear when cruising. But that really may only be noticeable because the rest of the car is so remarkably smooth and quiet.

The default Bentley driving mode is the best of all worlds and seems like the ideal way to drive the car for its balance of luxury and comfort. The actual Comfort mode is notably softer, all but eliminating inputs from road bumps and imperfections so the car glides over the pavement, at the expense of a little more body roll. It lightens the electric power steering and slackens throttle response, too, but not so much that the Bentley becomes a bore. Sport mode is the most fun, with more eager downshifts, heftier steering, and a baritone exhaust note.

Where previously the all-wheel-drive system had a permanent 40:60 front/rear split, the new one operates more like a rear-drive car. Usually, in the Comfort and Bentley driving modes, only 38 percent of the engine torque goes to the front axle; in Sport mode, that drops to just 17 percent. “You can drift it,” promises chief engineer Bob Teale, a claim I do not try to verify with someone else’s six-figure luxury car.

Aiding that crispness are 48-volt active anti-roll bars that can can resist or permit body roll, pitch, and dive at each wheel depending on the driving mode. Working along with the air suspension, that means the car is far flatter through bends than before, yet can still be ultra-supple in Comfort mode. Brake-based torque vectoring is also standard. Previously offered on the racy GT3-R and Supersports variants, it can squeeze individual brakes to help tighten the car’s line through bends.

All told, the 2019 Continental GT handles more delicately and enthusiastically than before. With the steering wheels right up at the nose and less weight over them, it flicks around more nimbly and points into bends with a bit more eagerness. Twisty roads are ably dispatched, body roll in Sport mode is practically a non-issue, and there’s traction to spare from the Pirelli tires.

At the same time, the longer wheelbase doesn’t exactly allow the Bentley to dance through bends because, well, it’s a big car. And the steering makes it feel even bigger, because it lacks feel and weights up aggressively. The car is much better to drive, but still more GT than sports coupe.

The much sleeker look of the new Continental GT is easy to admire. It’s still got the same design cues as its two direct predecessors and the 1952 R-Type Continental from whence it draws inspiration. Long, low, and wide, the body is defined by the “power line” above the front fender and “haunch” that gives the car its sensuous rear hips. The much shorter front overhang gives gorgeous proportions with the wheels pushed right out away from the cabin. Bentley’s “superforming” construction methods allow for making massive aluminum panels that manage to hide cutlines while allowing for incredibly sharp, crisp creases along the surface.

The four road lights up front now have a “cut crystal” treatment that recalls pricey glassware, the roofline is sleeker as it plunges toward the decklid, and the trunk itself simplified with a concave surface broken up only by ovoid taillights. Oh, and aerodynamic performance has improved, the drag coefficient falling from 0.31 to 0.29. While the simplified rear looks a little plain and indistinct, from every other angle the Continental GT is beautiful yet modern, full of presence yet reserved.

When I leave the winding roads behind and settle onto the autostrada, I switch back to Comfort mode and relax. The cabin really is stupendously quiet, with barely a flutter of wind noise or rumble from the tires making their way to my ears. Even at highway speeds driver and passenger could whisper to one another and still be heard. Bentley says that new laminated windows cut low-frequency road noise by 9 decibels alone. No doubt, this is one of the quietest and most comfortable cabins around.

It’s gorgeous, too, dripping in materials that would shame the inside of a luxury hotel. A new double-diamond door panel design, for instance, took Bentley’s craftspeople 18 months to develop. I sink into the sumptuous seats, run my fingertips across the many knurled metal elements, and rest my elbows against ultra-soft leather. Inside each Continental GT are 1.7 miles of thread and 310,675 stitches, all done by hand at the factory in Crewe. Lovely wood veneer adorns the dashboard of my tester, too, giving a suitably old-world luxury touch amid all the new buttons and displays.

Most secondary controls are operated by a smattering of buttons all over the broad center console. They click-click with a rather unsatisfying feel similar to an old cell phone’s keypad, but at least are simple to find by feel while driving. To adjust the temperature, you rotate dials that have the current set temperature displayed within them; those displays get rather hot to the touch, which is at odds with the cool-touch metals, leathers, and plastics elsewhere.

The 12.3-inch touchscreen infotainment system is significantly more modern than the one in the outgoing car. It’s mounted to a three-sided rotating element in the dash that uses two electric motors and 40 moving parts. When the car is running, the Bentley Rotating Display can show you either the touchscreen or a trio of analog dials that display the outside temperature, compass heading, and a chronometer; when the car is off, the display spins and whirs away, leaving only wood trim for a super-clean appearance.

When exposed, the new touchscreen works simply and quickly, a column of shortcut tiles (Nav, Media, Phone, etc) on the left-hand side. Whether used to navigate, play music through the optional sound systems (up to 18 speakers and 2,200 watts), or adjust vehicle settings, the infotainment system responds to touches instantly. Apple CarPlay and Android Auto are supported, too. That the system works so well is not too much of a surprise, as it’s the exact same slick touchscreen you’ll find in the Porsche Panamera to which the Continental GT’s chassis is closely related.

Ahead of the driver is Bentley’s first full-digital instrument cluster, which has detailed virtual recreations of an analog tachometer and speedometer, and a central area for maps, trip details, and other information. Plus there’s a color head-up display that will indicate your speed, the cruise-control speed, upcoming navigation instructions, and even the current speed limit.

Though deliveries of the new Continental GT are beginning now in Europe, the car won’t reach the American market until spring 2019. It’ll have a staring price of $214,600 before destination, taxes, and the many, many options from which buyers can select.

Company founder W.O. Bentley is quoted as saying his goal was, “To build a good car, a fast car, the best in its class.” There’s no denying his namesake company aced the first two objectives with the 2019 Continental GT: a fabulous machine with a monstrous engine, it makes every journey feel special.

On the last count, the Bentley does have some pretty solid competition, namely from Aston Martin’s new DB11 and the Mercedes-Benz S-Class Coupe. Where the Continental GT stands out is its style and sense of occasion. From the gorgeous handcrafted inside and outside to the sublime driving experience, it really is the ideal way to cross Europe in style.