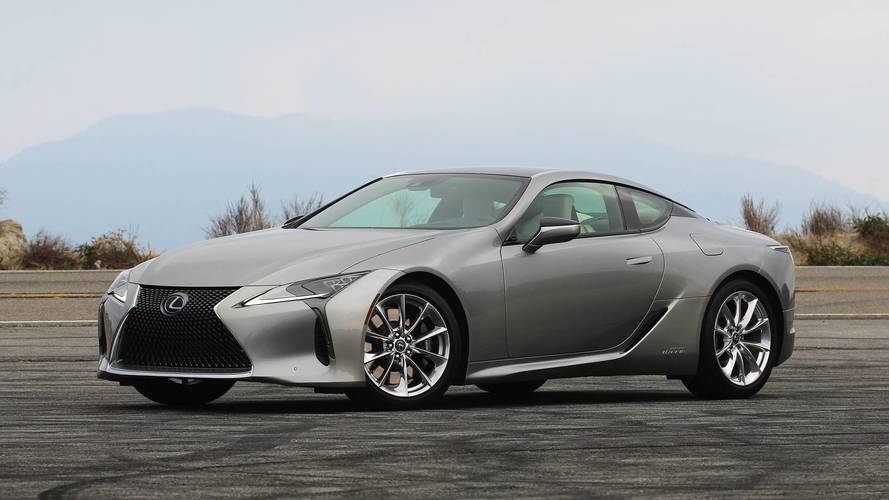 A striking design can’t overcome many frustrations with the LC hybrid.

Visitors to Fallingwater, the famous Frank Lloyd Wright-designed home in Pennsylvania, are awed by the building’s stunning appearance both inside and out. But the house is not without its internal flaws: its skylights leaked on occupants, and when I visited several years ago, engineers were hurriedly reinforcing the concrete structure so the house wouldn’t collapse.

This comes to mind while behind the wheel of the 2018 Lexus LC 500h because the new hybrid coupe is truly stunning to behold, but filled with technical annoyances that make it a chore to live with. A dim-witted transmission and labyrinthine infotainment system overwhelm my affinity for the LC’s looks and chassis. As automotive art, it’s great. As a driver’s car, it’s (mostly) lacking.

It looks fantastic. Who knew that the LF-LC concept from 2012 would so seamlessly be translated to a road-going model? The LC draws the eye from every angle, with show-car flourishes and lines, mesmerizing 3D-effect taillights, and a silhouette straight out of a futuristic racing game. This is a car I’ll look back at as I walk away in a parking lot – and I saw plenty of other motorists craning their necks for a second glance, too.

Sumptuous interior. There’s a simple word for how I feel when settling into the LC’s driver’s seat: cozy. Not in the sense that I’m cramped, but in that the flowing lines, generous amounts of leather and suede, and the tidy switchgear are overwhelmingly pleasant to behold and touch (just don’t pick the weird multi-colored interior scheme pictured here). Like any car deserving of the “L” badge, the cabin also rejects as many outside noises as possible, keeping things tranquil while on the move.

Great steering feel. The LC’s steering wheel shares a remarkably detailed travelogue about the progress of its front tires. Put one tire over a lumpy lane lane and you’ll feel it; load up the tires too much in cornering and you’ll feel it; drive over a sloped or crowned road and you’ll feel it. All this without some of the demerits (tramlining, overly heavy steering action) that plague some rival sporty cars.

In fact, great handling in general. The LC is nimbler and more responsive than its size or mass would suggest. There’s a directness and sparkle in the way it follows your inputs, and it tracks through corners (or dead-straight on the highway) with aplomb. Never surprising, always willing, the LC is an able dance partner. Too bad so much fun is sapped by a dullard gearbox…

Perplexing transmission. Imagine combining the worst habits of a continuously variable transmission and a traditional automatic into one gearbox. The LC’s has both a CVT and a four-speed automatic mated together; the goal is to “emulate” the gearing of a 10-speed automatic (available in the non-hybrid LC 500), but the result is less than smooth. The LC’s driveline provides both lurching shifts and rubber band-like vagary under acceleration, sapping any fun the engine might otherwise deliver. It’s hard to have fun behind the wheel when you can’t predict how or when power will be delivered. And driven briskly, the V6 moans loudly as it hangs out high in its rev range.

Distraction-heavy infotainment. The touchpad-based infotainment system is a chore to use while stopped, never mind while driving. Seeking on-screen items through the console-mounted trackpad is infuriatingly tricky and requires taking your eyes away from the road. The on-screen menu structure shames IRS tax forms for its complexity. It takes four “clicks” from starting the car to turn on the heated seats, for instance, and retuning the radio is best effected by scrolling the physical “Tune” knob rather than using the touch controller. Oh, and your smartphone won’t save you here: as in all Toyota and Lexus products, Apple CarPlay and Android Auto are unavailable.

Less space, more weight than the V8. It’s probably fair to guess that nobody will buy this car for practicality, but it’s worth noting that you’ll get modestly less trunk space (0.7 cubic feet) and rear legroom (0.5 inch) than in the already cramped, V8-powered LC 500. Curb weight also predictably rises for the hybrid, by 155 pounds.