The all-new Fiesta has more toys, more luxury, and, well… more of everything.

The updated Ford Fiesta has launched abroad, and our colleagues at Motor1 UK have already had a first crack at the new compact hatch. We'll have a full U.S.-spec review in the near future.

The Fiesta is an absolute staple part of the automotive diet in the U.K. – it has long been a best-seller year-on-year, often topping the sales charts. That makes designing an all-new version a challenging affair.

With each new iteration of an iconic car like the Fiesta, you hope for a huge shift in design direction. Sometimes you get it, sometimes you don’t. This time... you don’t. You’d have to be pretty dim to mistake it for the old car, but you don’t get the impression that the design team stretched itself too much. Though, as the cliché goes, if it ain’t broke… 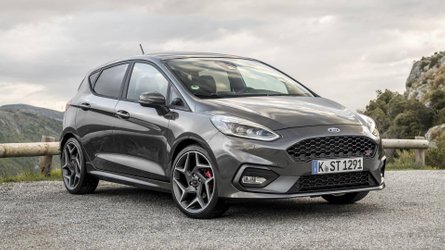 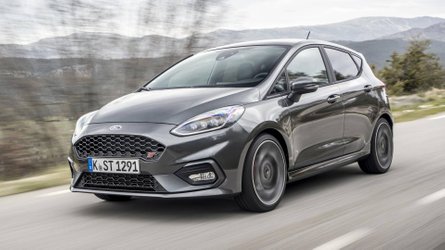 Just because it’s similar to the old one, that doesn’t mean it’s not a looker. Pictures don’t quite do it justice – the headlamps tend to look stuck on and a bit odd in 2D, and it gives an egg-ish impression in photos. In the metal there are plenty of interesting angles and creases to keep your eyes busy. ST Line cars get jazzier side skirts and a bigger spoiler than other models as well, something sure to excite buyers looking for some extra go. 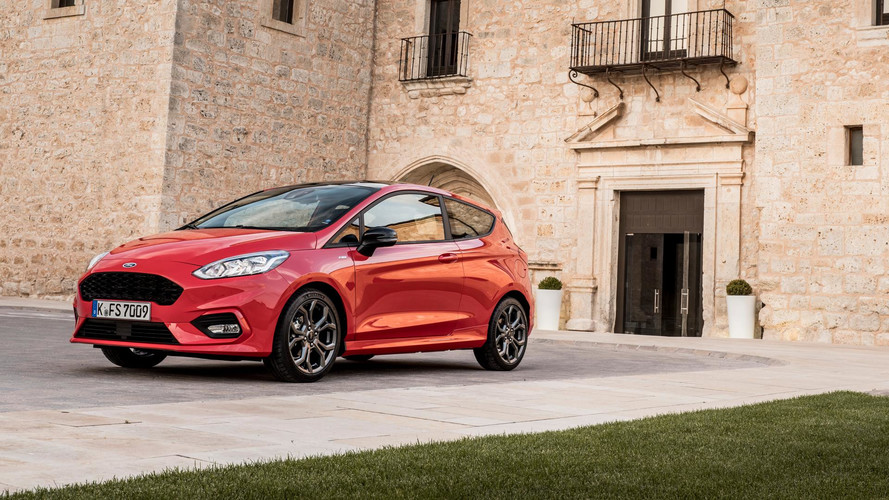 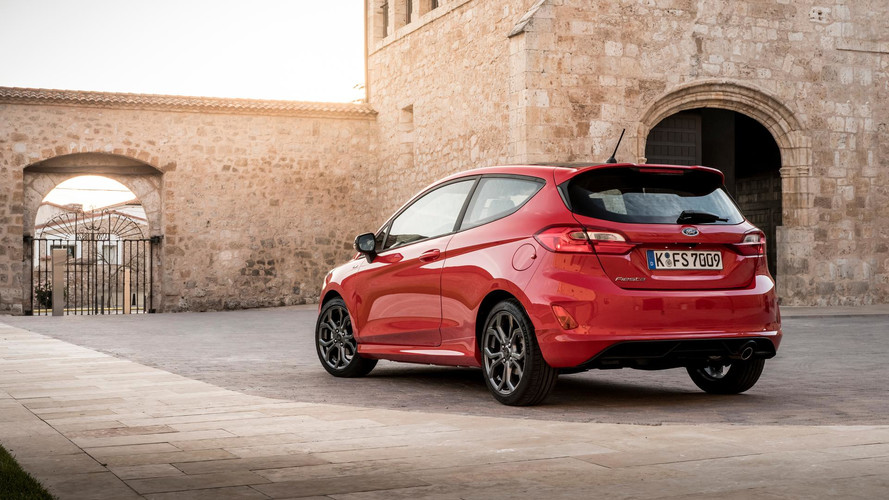 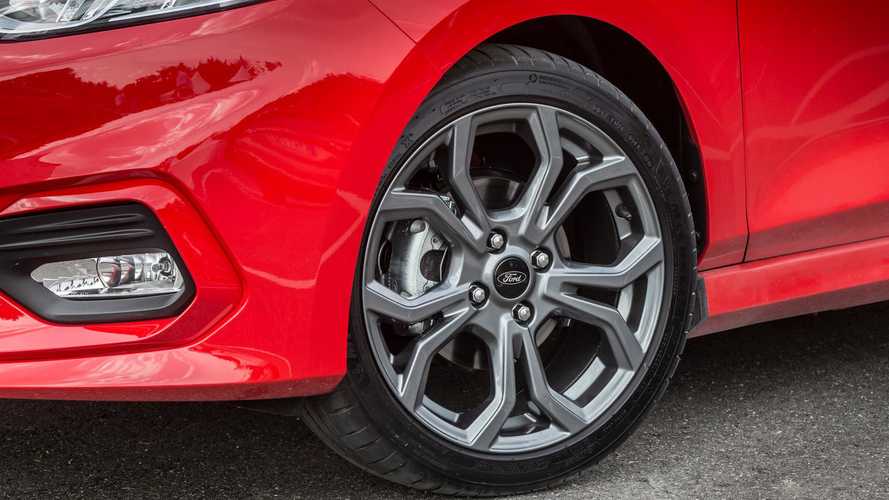 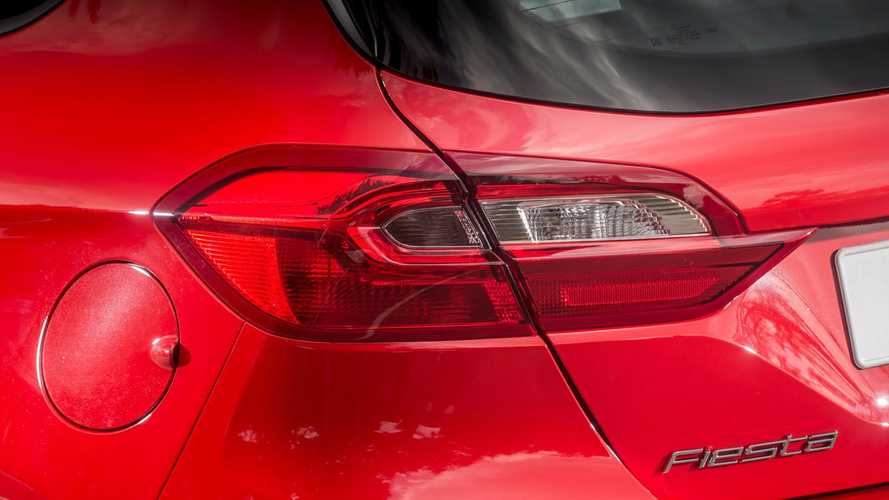 Pictures don’t quite do it justice – the headlamps tend to look stuck on and a bit odd in 2D, and it gives an egg-ish impression in photos.

The interior is much improved over the old car. Where there were once many buttons and space taken up with a thick centre stack, now there’s an (optional) 8-inch screen (6.5 as standard on most models, only the base cars go without such wizardry) boasting Ford’s Sync 3 system, and a few buttons for the climate control. This means more space in the cabin, making it feel far bigger than it actually is.

The screen works well enough, with its icons and such placed in easy view so as not to distract for too long. It’s quick enough to react to a light prod, and even does the whole ‘pinch to zoom’ thing you get on an iPhone. Sync isn’t an ideal interface if you want a stress-free life, though. It can be frustrating and confusing if you’re unfamiliar with it. Sometimes even when you are.

Interior design, increasingly important in this end of the market, has been given a thorough working over. The materials are nicer to poke, touch points feel sturdy, and you get a greater sense of ‘premium’ than you used to. 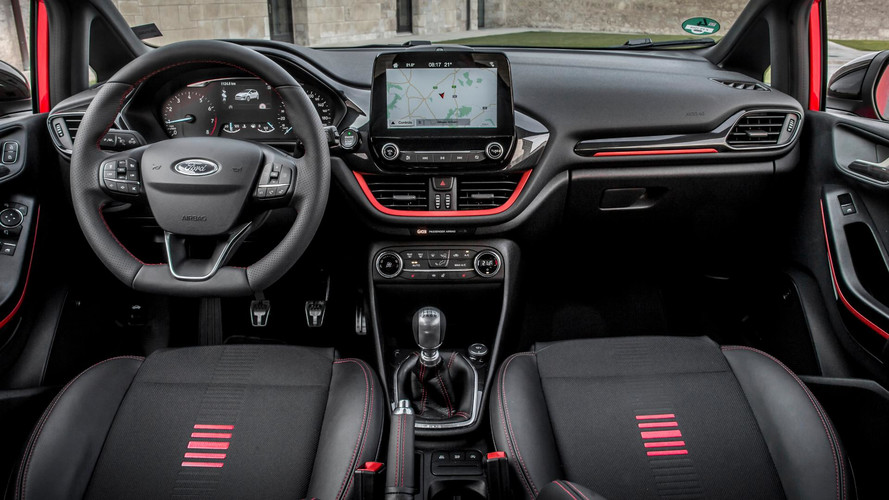 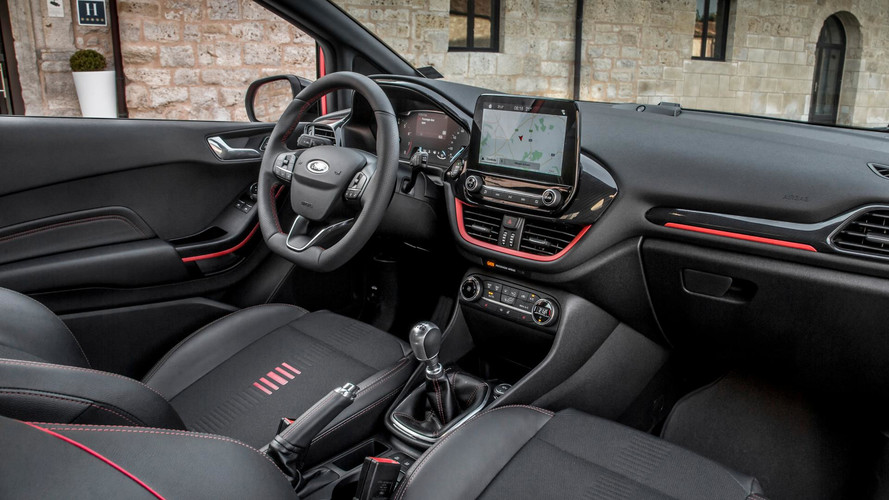 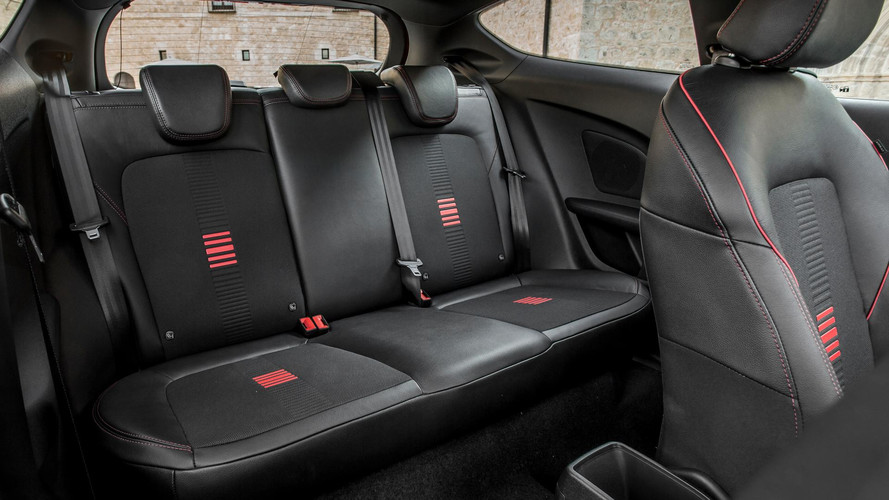 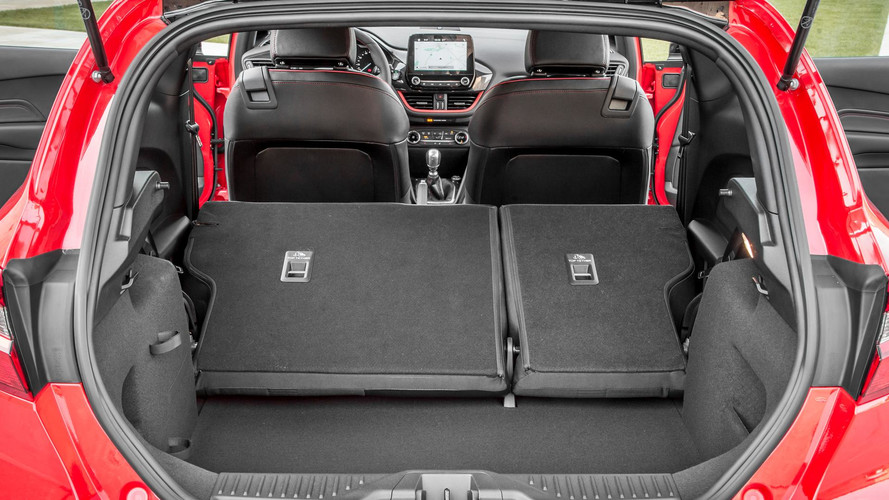 Interior design, increasingly important in this end of the market, has been given a thorough working over.

The Fiesta is intended to attract a broad range of shoppers with four distinct flavors: Normal (vanilla Fiesta), ST Line (sporty), Active (off-road-ish), Vignale (luxurious). Each one offers a suitably different experience, though the Vignale cars can set you back over $27,000 in certain spec – $27K for a leather-clad Fiesta seems a bit much, no? On the upside, Ford has partnered with Bang & Olufsen Play to give owners an (optional) aural feast. It was fitted on our test car and it was rather wonderful.

The Fiesta is not without fault, though. The steering wheel is huge. A minor gripe, sure, but it feels needlessly wide for such a small car. Also, in the three-door car, getting into the back is difficult. While the seats do slide forward, they don’t go far enough to get bulky items onto the back seat easily. While there is space for adult-sized humans back there, the rear window and side windows are small and don’t let much light in. It can get awful claustrophobic.

Ford has a strong reputation for making its small cars hilarious fun to drive yet accessible too. The ST Line cars come with stiffer suspension to appeal to those who want a slice of boy racer in their lives. The good thing is it’s not overly harsh or uncomfortable on nasty, rutted country roads (not unlike some of the U.K.’s backroads), yet it’s stable and comfortable on the motorway, and offers more grip than you would possibly need if driven enthusiastically.

Getting the steering right on a car like this is imperative, and mercifully Ford has managed to get the Fiesta’s setup bang-on. It offers great feedback without being too heavy to use or over-assisted, as can be the case in some city cars. It’s light for city work and pleasingly tactile out and about. 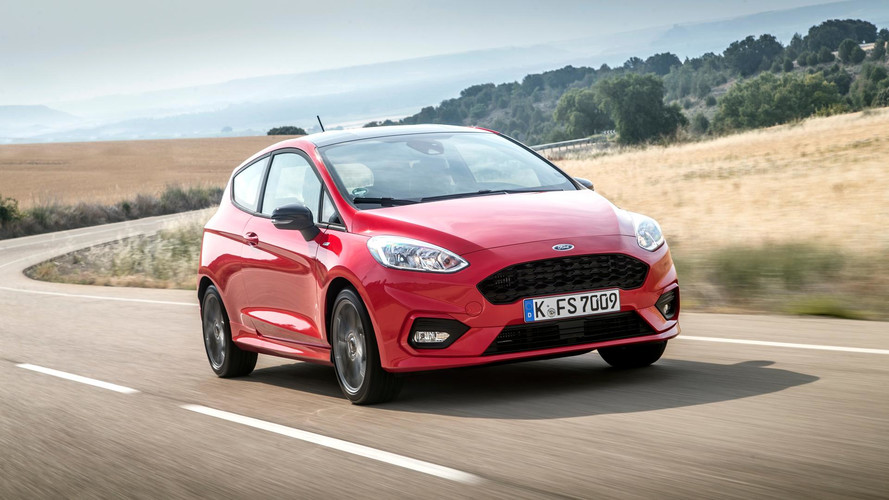 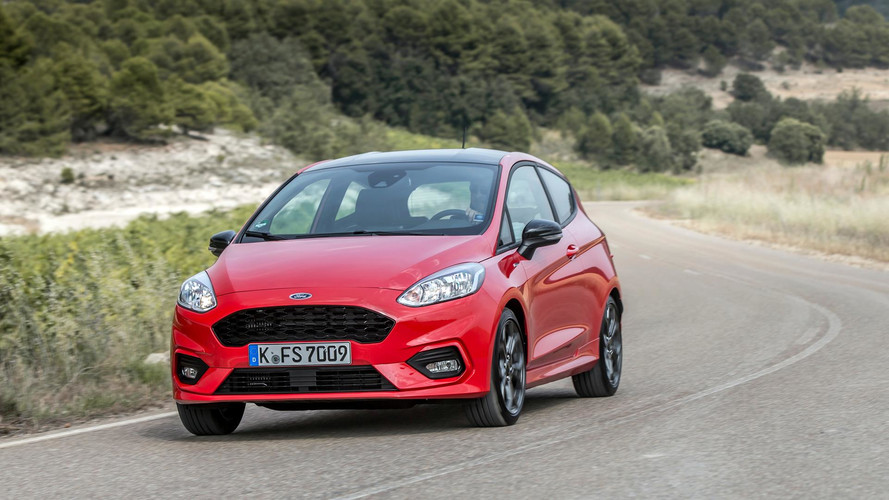 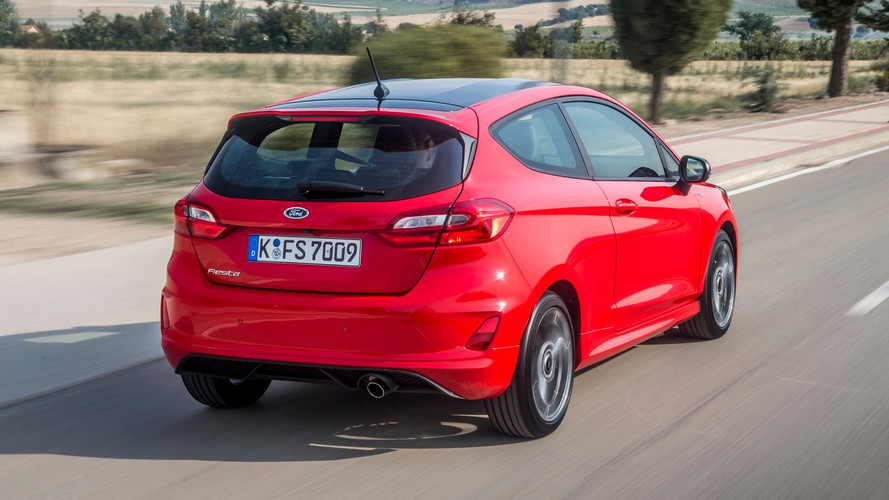 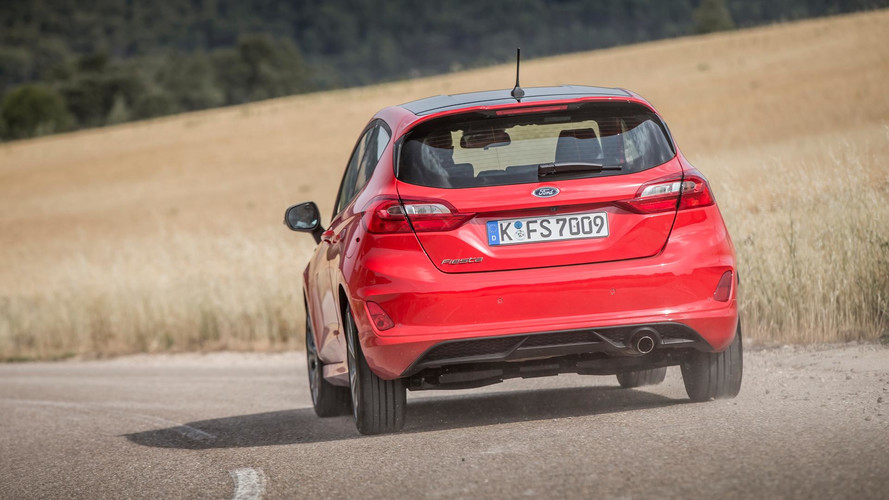 The new Fiesta feels like a more grown-up version of the old car, as if it’s gone to finishing school to smooth over any rough edges.

The 1.0-liter turbocharged three-cylinder Ecoboost engine is a perky little thing. Available with power outputs ranging from 99 hp all the way up to 136 hp, it’s a remarkably impressive motor. It doesn’t (according to official figures) drink too much fuel, yet offers decent in-gear power. No, it doesn’t have the most torque in the world, but it never feels underpowered. Like we said, a remarkable motor. While a 0-62-mile-per-hour time of 9.0 seconds can seem sluggish to some, it feels far more brisk than the numbers would lead you to believe.

Overall the new Fiesta feels like a more grown-up version of the old car, as if it’s gone to finishing school to smooth over any rough edges.

The only reason you’d wait to buy it would be because a super-quick, full-fat Fiesta ST is dropping next year. If you want a decent everyday hatchback in the meantime, the Ford Fiesta is likely going to do it for you.