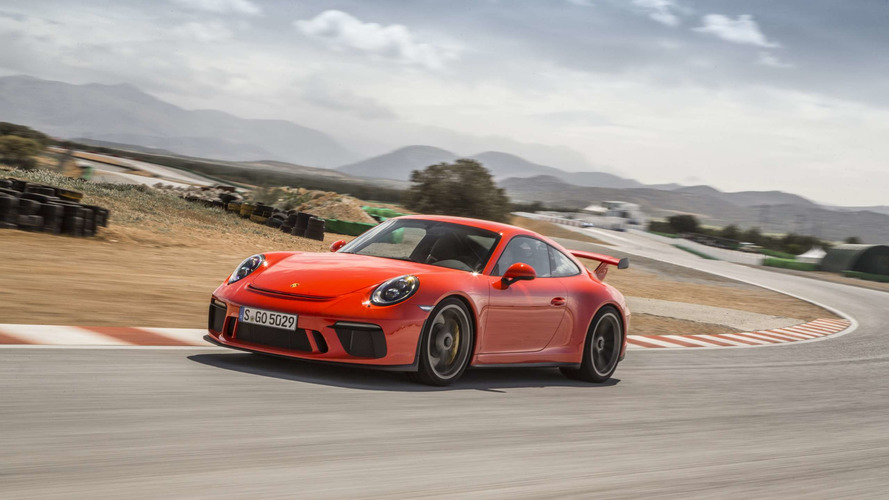 Of all the many and varied possibilities available within the Porsche 911 range, a few stand out, and those from Porsche’s GT department rise above all of them. The racing division develops road cars to legitimize its weekend activities, which means that the GT3 is unashamedly linked to Porsche’s race cars. The result is a 911 that’s lighter, purer and more focused than the regular Carrera models, a car with a hardcore nature that appeals to customers who will take their cars to the track, regularly.

The outgoing GT3 was overshadowed by the GT department’s more recent GT3 RS and 911 R models, so you might have forgotten about it. But while those two have been stealing the headlines, Porsche’s GT division has been readying this new 911 GT3.

In typical Porsche fashion, incremental improvements define the changes, with more power, greater grip and poise, as well as new equipment, too. The high-revving flat-six engine grows in size to 4.0 liters, power up to 500 horsepower now and its appetite for revs is undiminished – the naturally aspirated unit redlines at a heady 9,000 rpm. There’s now the option of a manual gearbox alongside the PDK paddle-shifted auto, while improvements to the aerodynamics and chassis allow owners to better exploit and enjoy the GT3 as intended.

An obviously more focused 911, the GT3 wears its track intentions with pride, if not quite with the extrovert wide Turbo-bodied stance of the 911 GT3 RS. Not that the 25-millimeter lower ride height, Carrera 4 body, complex front bumper, and large rear wing leave you guessing at its focus, plus that carbon fiber wing sits a touch higher and farther back than on its predecessor.

That, allied to extensive underbody aerodynamic changes and a revised front splitter, allow a 20-percent increase in downforce, without any increase in drag – the GT department, as ever, working on maximizing efficiency in the pursuit of eking out quicker lap times.

For the quickest GT3 you’ll need the PDK automatic, the seven-speed paddle-shifted transmission allowing a 3.4-second 0-62-miles-per-hour time, some 0.5 seconds quicker than the six-speed manual car.

That inclusion of a manual choice is big news, as the previous GT3 was only offered with PDK, so Porsche clearly listened to the protestations of its hardcore, three-pedal and manual shift-loving audience and added it to the options list once more. Choose the PDK for convenience though and you gain Porsche Torque Vectoring + and an electrically controlled limited slip differential over the manual’s mechanical differential and mere Porsche Torque Vectoring (no '+').

Many, though, will happily sacrifice a little accelerative ability for the manual’s interaction, and Porsche offers the choice of transmissions at no additional cost. Same story for the Clubsport package, another no-cost option that adds a half cage to the rear compartment (the GT3 does without rear seats as ever), as well as a fire extinguisher and six-point racing seatbelts.

The engine’s keenness to rev is still there, reaching for the screaming 9,000-rpm redline.

With that cage behind you and the smaller diameter rim of the Alcantara trimmed steering wheel, the GT3 is unashamedly focused. It’s pared back, and it's even possible to remove the radio and air conditioning if you really value weight reductions, but, really, that’s taking things a bit far, isn't it?

In our ever-connected, share-everything world, the addition of Porsche’s Track Precision App is no surprise. It allows you to record lap times to your smartphone in case you want to show your pals. Don’t do that, as nobody’s that interested, really...

The rest of the specification reads much like any GT3 before it, which means you’ll want for nothing and, given the GT3’s performance and specification, reads very much like the limited-edition 911 R that’s fetching crazy money among collectors. In short, it looks like conspicuously good value.

Strap yourself into the figure-hugging, low-set seats and it all feels very familiar. The Clubsport’s cage fills the rear compartment, but unlike its RS relation the rear-view mirrors aren’t so ominously filled by the rear wings. The GT3 is slimmer – marginally, admittedly, but it’s enough to give the impression of greater ease of use on narrower roads.

Start the new 4.0-liter boxer engine and the differences over its GT3 predecessor are immediately apparent. The richness of sound from the old GT3 at low revs has been muted slightly in the new 4.0-liter unit. Pushing the sports exhaust button helps, but in the old GT3 it wasn’t quite as necessary.

That changes on the move, with a real shift in tone when there’s 4,000 rpm and above on the tachometer, though the slight loss of aural appeal is more than compensated for by the significant improvement in low-rev drive from the bigger capacity, more powerful engine.

Acceleration that would have required a lower gear in the old GT3 is achieved without complaint, and the linear delivery, allied to the shear immediacy of it, characterizes the new GT3. You can feel the lack of inertia achieved by reducing internal friction, so the engine’s keenness to rev is still there, reaching for the screaming 9,000-rpm redline, which is something you’ll struggle to resist.

Do that and the speeds it’ll achieve are extraordinary, reaching 62 mph in 3.2 seconds from zero, double that in just 11 seconds. Step on the brakes and it’s just as breathtaking. Sensational as the engine’s breadth of performance is, it’s the chassis that the engine’s housed – rigidly – in, that defines the GT3.

The suspension has been significantly revised, starting with the springs and damper rates for quicker reactions. Along with that, the dampers’ internals and valves have been optimized to reduce friction, while 'helper' springs on the rear help retain control. While obviously taut, the ride isn’t overly compromised despite the GT3's clear focus. The standard PASM (Porsche Active Suspension Management) setting is best for the road, as Sport is overly brittle for anything less than glass smooth tarmac.

The GT3 remains the ultimate representation of the 911 as a pure sports car.

The rear axle assists with the steering, as the GT3 retains its predecessor's rear-wheel steering system, which turns the wheels 1.5 degrees to improve both agility and high speed stability. Certainly there’s no criticizing the steering response, which is quick and incisive as ever, the smaller diameter steering wheel delivering a fine stream of information without being too busy in your hands – the GT3 is a communicative and engaging driver’s car.

With its easily read limits it’s genuinely possible to enjoy, and exploit, all of the GT3’s performance. Switch off the stability and traction control systems and it’ll move around underneath you, the engine’s unique positioning allowing that typical 911 characteristic of weight shift. The traction and communication from the controls creates a drive that remains unique to the 911, and in particular the GT department’s versions of it.

Sampled here with the lightning quick shift of the PDK automatic, the seven-speed transmission might not be the purist’s choice, but it remains a compelling one. There’s none of the second-guessing of many rivals' systems, either, as it's a manual in all but its lack of pedals. If you’re using your GT3 everyday, you’ll want it, though that manual should add even more to the GT3 experience, even if it’s ultimately a bit slower.

So, should you buy one? If you’re even reading this, or remotely interested in the GT3 and driver’s cars, then, yes. Absolutely. The GT3 remains the ultimate representation of the 911 as a pure sports car – RS models aside – particularly now as the Carreras embrace a grand touring element as part of their make up.

It’s accessible, too, despite its mighty performance, making it a car you’ll enjoy on every drive. There’s very little out there to rival it directly, its breadth of performance and ability such that you’d be hard pushed to buy a single car that can genuinely encompass its breadth. With RS power now, and more than a bit of 911 R in its DNA it’s a hugely appealing prospect, and remains a conspicuous bargain. If you’re lucky enough to be in the position to be able to buy one, then do.