Audi stretches A8 L even further for six-door one-off 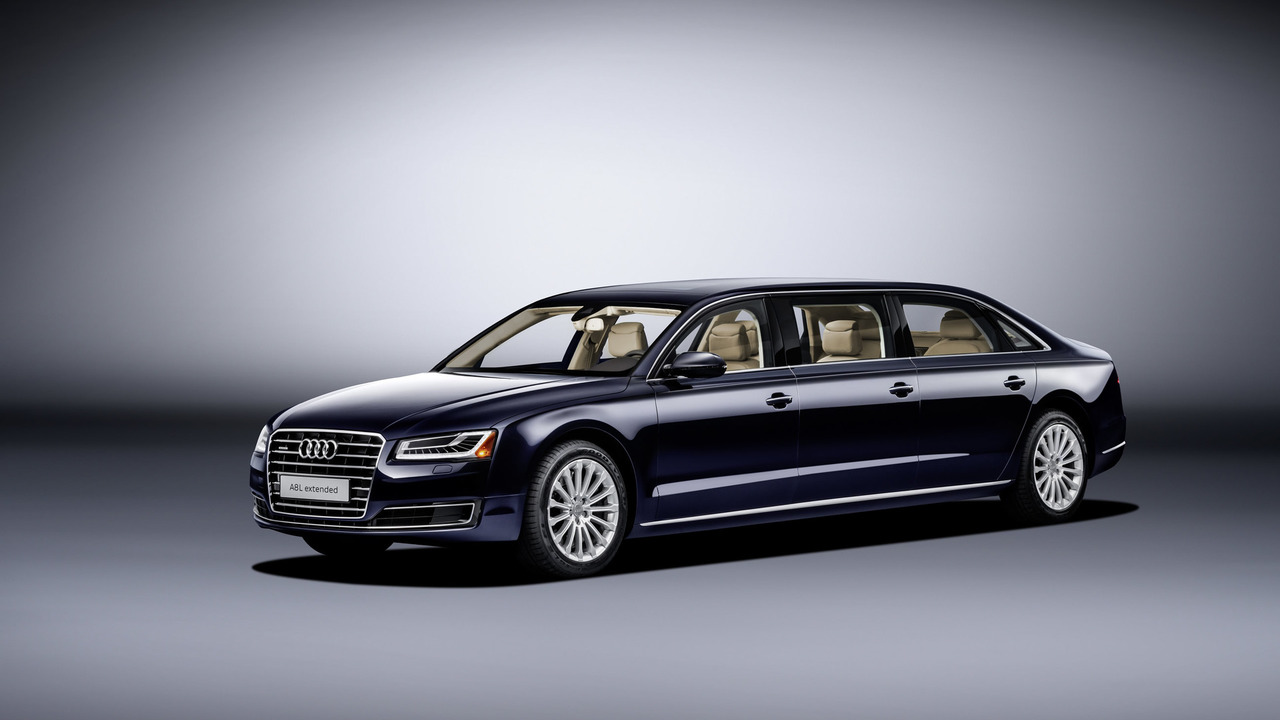 Audi has taken the wraps off a unique A8 L that was further stretched and has gained two extra doors.

Meet the Audi A8 L extended, a stately limousine with an overall length of 20.9 ft. (6.36 meters) and a massive wheelbase spanning at 13.8 ft. (4.22 meters). It’s described as an “exceptionally long luxury sedan” and required almost one year of development to get everything right. The six-door, six-seat A8 L extended wears a moonlight blue metallic paint on its body which had to be modified from the A-pillar back for this new application.

The built-to-order version comes with extruded aluminum sections for the extended side sills and center tunnel while a double rear bulkhead was implemented to separate the passenger area from the trunk compartment. To ensure a torsional and flexural rigidity almost on par with the A8 L, there are more aluminum profiled tubes and cross-braces in the elongated roof which hosts a 7.9-ft. (2.4-meter) glass panel. As required by the law for vehicles of this length, the Audi A8 L extended comes with small side marker lights incorporated in the headlight and taillight clusters.

Stepping inside the cabin, all of the seats face the direction of travel and each row comes with sun blinds. The seats have been covered in “extra-supple” Valcona leather featuring a velvet beige color while those on the rows two and three are individual and benefit from electrical adjustment. The seats on the third row are separated by a full-length center console featuring a screen and a cool box.

Audi has fitted the XXL sedan with a turbocharged 3.0-liter six-cylinder engine producing 310 horsepower (228 kilowatts) and a maximum torque of 324.5 pound-feet (440 newton meters). Not like it matters a lot with these limousines, but performance is more than decent, with the 0-62 mph (0-100 kph) taking just 7.1 seconds before hitting an electronically-capped 155 mph (250 kph).

Tipping the scales at 5,330 pounds (2,418 kilograms), the Audi A8 L extended rides on 19-inch wheels featuring a 15-spoke design and backed by a braking system sourced from the S8. As you would expect from such a vehicle, the extra-long limousine has an all-wheel-drive quattro system receiving the engine’s power through an eight-speed tiptronic transmission.

Although Audi is not revealing the identity of the customer, an article published by autofil.no in January revealed the Norwegian royal family commissioned a six-door, further stretched A8 L for King Harald's 25th anniversary as monarch. There are some images on that website with the car and it appears to be the same.