The luxobarge also gets dual touchscreens and F Sport and Ultra Luxury trims for the first time.

Better late than never, the third-generation Lexus LX is finally being retired after no fewer than 14 years on the market. It was well worth the wait as the all-new SUV brings improvements on all fronts, starting with a new platform that has shaved off a whopping 441 pounds (200 kilograms) of weight over its predecessor. If that rings a bell, it's because the new Toyota Land Cruiser, which won't be sold in the US, has lost the exact same amount of fat as a result of switching to the TNGA-F platform.

The styling is how pretty much everyone assumed it would be, featuring a side profile denoting the LX is heavily related to its more mainstream Toyota equivalent. It's worth noting the Lexus has a slightly different quarter glass and rear pillar, but the rest of the silhouette is largely identical. A massive spindle grille at the front and a wide LED light bar at the rear represent the main changes on the outside compared to the LC, along with more generous use of chrome.

It's inside the cabin where there are some major differences between the two as the revamped Mercedes GLS rival gets Lexus' first dual touchscreen setup. Measuring 12.3 inches, the upper screen shows navigation and audio controls, plus the off-road details of the Multi-Terrain Monitor system when you're going off the beaten path. The lower seven-inch screen provides quick access to the climate settings and can work as a support screen for the Multi-Terrain Select by showing camera feed on the upper screen and off-road data on the smaller display.

For the first time since the LX's inception in 1995, the body-on-frame SUV gets an Ultra Luxury grade with a four-seat arrangement boasting independent rear seats that can recline at up to 48 degrees for greater comfort. The front passenger seat can also fold down at the push of a button for greater legroom of up to 43 inches (110 centimeters) and there's also a deployable foot rest coming from behind the front seat.

The LX Ultra Luxury gets additional goodies, including overhead ceiling vents, reading lights, and a rear-seat entertainment system with dual screens as standard equipment. Lexus has fitted the upscale version with sunshades on the side and quarter windows, along with comfy seats featuring curved headrests and backrests as well as cushions. A center screen between the rear seats offers the level of functionality usually associated with high-end executive sedans.

Another first for the LX is the F Sport trim, riding on unique 22-inch alloy wheels – the largest available for the luxobarge. It's more than just a visual package as Lexus also installs a Torsen limited-slip differential for better traction from the rear axle. The F Sport grade comes with bespoke tuning for the front and rear dampers, along with a rear stabilizer and different settings for the variable suspension and electric power steering. 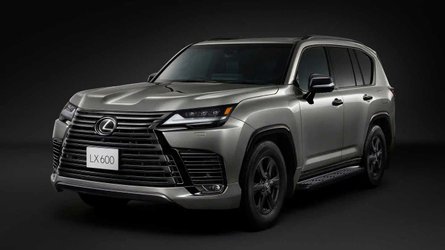 There are no surprises under the hood where the naturally aspirated 5.7-liter V8 engine is gone, replaced with a twin-turbo 3.5-liter V6 shared with the Land Cruiser. It pumps out 409 horsepower and 479 pound-feet of torque, thus bringing an improvement of 26 hp and 76 lb-ft over its predecessor. Output is channeled to the road through a ten-speed automatic transmission replacing the old eight-speed 'box.

As with all three predecessors, the 2022 Lexus LX features "the golden ratio" of a 112-inch wheelbase, while the approach and departure angles have been carried over from the third-gen model. Useful off-road features include crawl and downhill assist control, not to mention an active height control with more positions than before.

Lexus will have the fourth-generation LX at dealers in the United States during the first quarter of 2022.