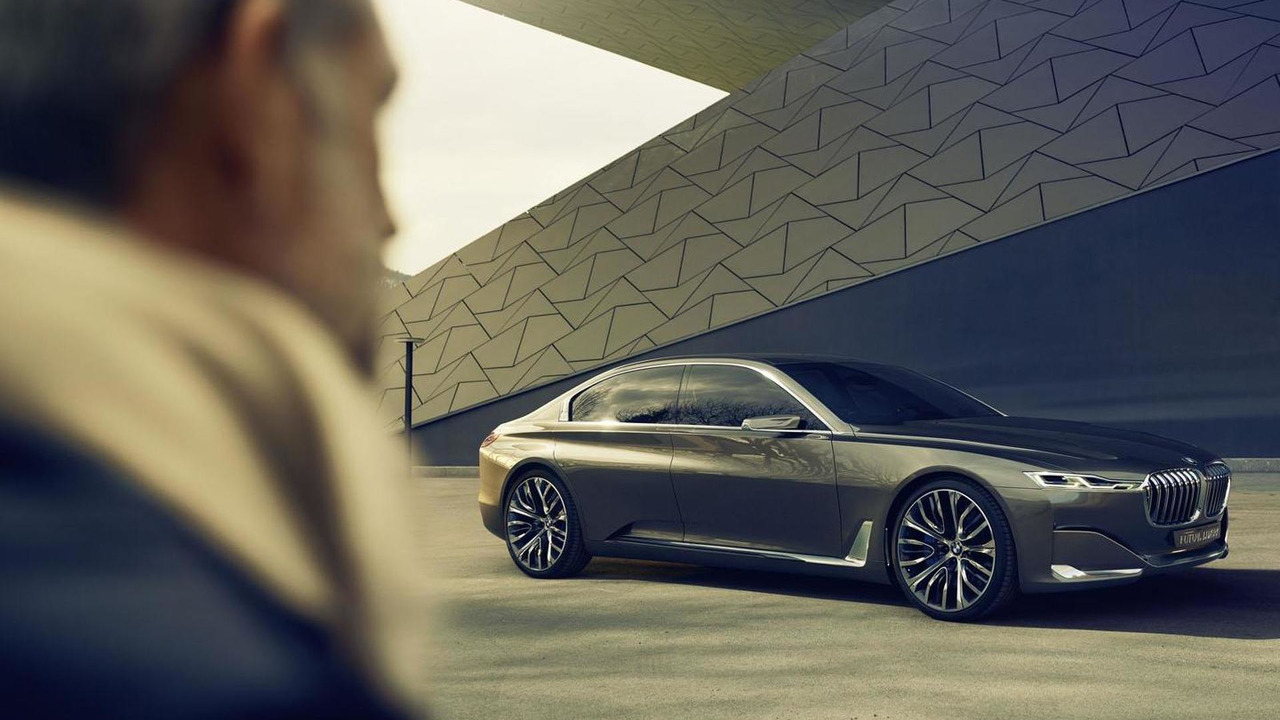 Designed to provide a "long-term outlook on the perception of modern luxury for the BMW brand," the concept has a Liquid Platinum Bronze exterior with a massive twin kidney grille that is flanked by laserlight headlights. The model also has carbon fiber air deflectors, chrome trim, OLED taillights and a carbon strip that hints at the car's carbon fiber and aluminum chassis.

Inside, the driver is surrounded by a wraparound instrument cluster that consists of three intermeshing displays that use three-dimensional technology. The left display shows vehicle-related information, while the center display shows a programmable speedometer, rev counter and "context-adaptive supplementary data" that appears as needed. Lastly, the right display shows infotainment information.

The concept also has a “contact-analogue” BMW Vision Head Up Display. BMW says it augments the "driver’s view of the real world by projecting information directly in the driver’s line of sight onto the road." As a result, "buildings, traffic signs or hazards can be highlighted directly in the real-world environment, selectively directing the driver’s attention to specific information which is particularly important at any given time."

Rear seat passengers aren't left out as they have access to two rear displays and a removable Touch Command Tablet. BMW says the displays and tablet provide access to "everything from trip-related information - like speed and journey time - to information relating to the Luxury Concierge Services can be displayed here in simple and customized form." They can also access online entertainment including video, music and gaming services.

Interestingly, the interior uses lightweight construction including subtractive modeling. As BMW explains, "An initial base layer of fine carbon fabric is followed by a functional level featuring user interface components, control and display interfaces and lighting functions, which in turn is followed by a further structural, load-bearing layer of aluminum for additional strength. Finally, the top layers comprise wood, then leather, to create a warm and comfortable ambience." BMW declined to go into specifics but said the process cuts the "total weight substantially."

The extensive carbon fiber construction also enables the concept to "very small and unobtrusive B-pillars" which help to create an airy cabin. It also enables the seat frames to be integrated into the load-bearing structure.

According to BMW's Senior Vice President of Design, Adrian van Hooydonk, “We use visionary concept vehicles like the BMW Vision Future Luxury to show where we may be going with these themes in the future, and to give us new inspiration and motivation. The BMW Vision Future Luxury – with its innovative technologies and with meticulous precision and quality in every detail – takes our thinking on modern luxury a logical stage further.”