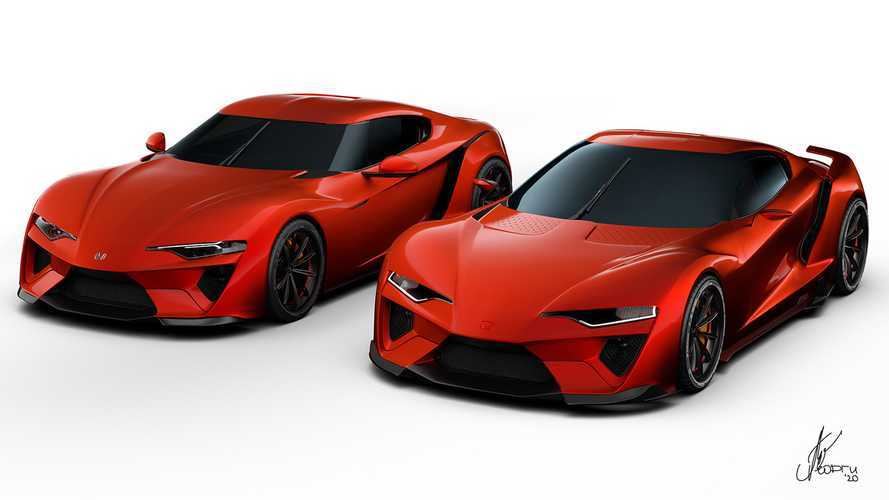 One is a posh coupe, the other is an edgy sports car.

The Toyota Supra doesn’t have much competition from other Japanese automakers. The Nissan 370Z is in the ballpark, but its decade-old platform and 332-horsepower (248-kilowatt) V6 aren’t up to snuff with the Toyota’s BMW-powered offering. There is nothing remotely comparable from other brands in the region, but these renderings from Georgi Bozhkov at Bēhance.net image a future where Honda steps up to the plate.

The renderings feature not one, but two possible Honda-badged contenders – the Prelude and the Sparrow. Both are very similar in overall shape, but the Sparrow adopts a smoother, rounded coupe design versus something a bit more edgy with the Prelude. It’s appropriate, as the Prelude was always edgy to some degree. The Prelude here is defined by a sharper body kit that even adopts a Ferrari FXX-themed split spoiler at the rear.

If the Prelude is the hardcore racing version, the Sparrow serves as a stylish, sporty coupe. Its overall shape is certainly reminiscent of the Supra, and in Bozhkov’s Behance.net posting he explains the Toyota origins of this design project that actually began in 2013. The FT1 Concept – which was essentially a Supra predecessor – served as inspiration along with the Nissan GT-R. With that in mind, we can absolutely see some GT-R influence in both renderings presented here.

Fan Renderings To Tug At Your Heartstrings:

These designs date back to 2013, and as such, Bozhkov has tweaked and fine-tuned them over the years to what you see here. We recently featured a Mercedes-AMG SLR Concept from him that came about in a similar fashion, and these Honda offerings are just as impressive. Furthermore, if you recall from that SLR article, we mentioned Bozhkov isn’t an automotive designer by trade. He’s an enthusiast with a keen eye and considerable talent, and we would love to see a reborn Prelude with designs like those featured here.

There are many more renderings of the Prelude and Sparrow to peruse at Bozhkov’s site, which you can visit through the source link below.