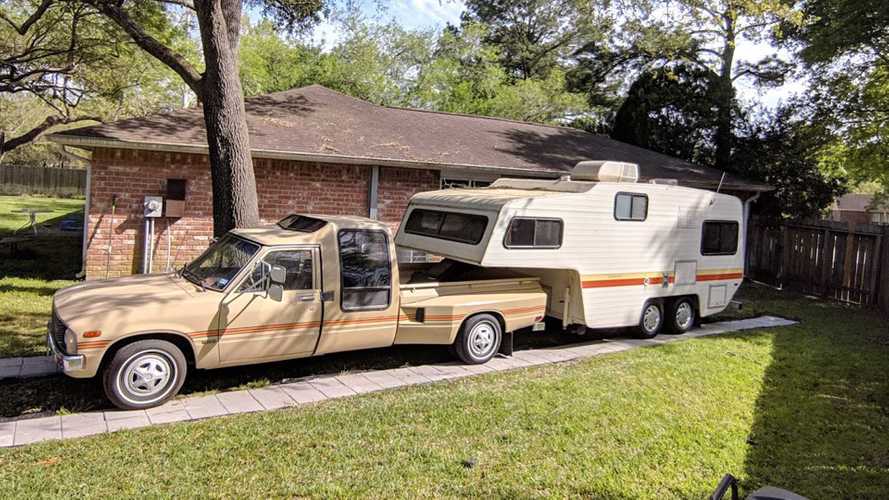 It's an epic time capsule with just over 22,000 miles on the odometer, and it's for sale.

Ordinarily, when we talk about motorhomes, it usually involves a large van or full-size truck platform. When it comes to towing fifth-wheel camper trailers, full-size trucks are pretty much guaranteed to be part of the process. This is one of those times where none of the above holds true, because the 1981 Toyota Sunrader featured here is small, rare, and absolutely awesome. And if you really love it, you can park it in your driveway because it’s for sale.

The Sunrader itself isn’t especially uncommon as a small RV, but this matched fifth-wheel combo is exceedingly rare. John Polk is the current owner, who came upon this rig at a dealership in 2018 and just had to have it. As if the fifth-wheel isn’t already rare, this particular setup only shows 22,174 miles on the odometer. Under the hood is Toyota’s plucky 22R four-cylinder engine connected to a five-speed manual, and Polk’s listing at toyotarvforsale.com shows a bevy of maintenance recently performed. Still, with the four-pot generally good for about 100 horsepower, this rig isn’t what you’d call fast.

This Single-Wheel Camping Trailer From 1955 Is Absolutely Adorable

1961 Bedford Dormobile Is A Cool Retro British Camper For Sale

But this is one of those times where performance absolutely doesn’t matter. The 19-foot trailer has a full kitchen and bathroom and includes space over the truck bed for sleeping. A dinette at the rear of the trailer also converts to a bed, and the trailer is said to be in good condition despite being 39 years old. The water tanks have been sanitized and there are no reported leaks in the trailer. Not all is perfect – original curtains show wear and the heater doesn’t work, but a roof-mount air conditioner retrofitted in recent years apparently works just fine.

As for the truck, It’s very much a rarity on its own. The quad-cab Toyota has a very large set of windows for the rear seat, and the long bed sits atop a set of dual rear wheels. As with the trailer, the truck shows some wear simply due to age, but it still runs and drives well and with the bulk of the trailer weight resting on the trailer axles, the little Toyota pulls the camper quite well.

Polk is seeking $35,000 for this vintage rig and it's located in Houston, Texas. Figuring out a price for any automotive time capsule vehicle with low mileage is tough, never mind one as rare as this. Based on the excitement for this combo we see at the Toyota RV For Sale Facebook group, we suspect this beautiful Sunrader won’t be available for long.