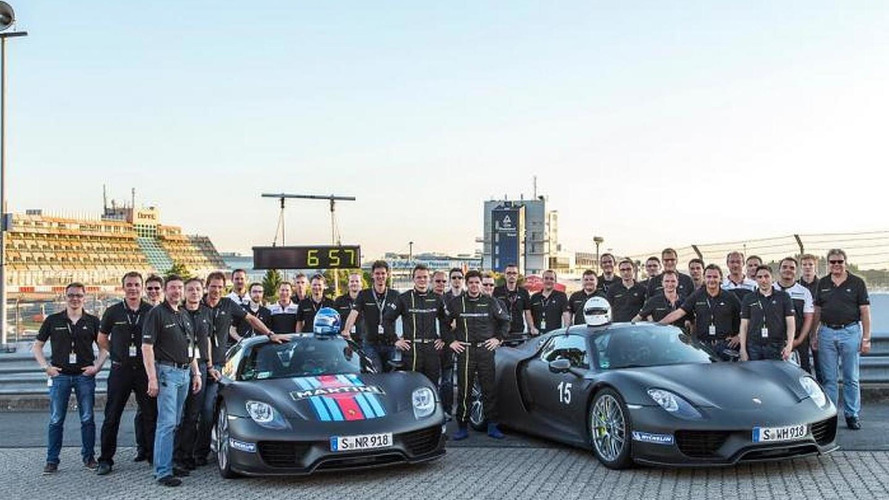 Porsche is proud to announce the 918 Spyder is now the quickest car with global road homologation to lap the Nürburgring Nordschleife.

Porsche is proud to announce the 918 Spyder is now the quickest car with global road homologation to lap the Nürburgring Nordschleife.

It was only yesterday when Porsche finally introduced the 918 Spyder in production guise and now they have revealed the car managed to take down the Nordschleife record for a car which is legal all over the world. It happened on September 4 with Porsche factory race driver Marc Lieb behind the wheel lapping the 20.6 km (12.8 miles) circuit in 6 minutes and 57 seconds, considerably better than the previous 7 minutes and 11 seconds established by the Gumpert Apollo Sport.

Porsche test driver Timo Kluck and former European Rally Champion Walter Röhrl also managed to take down the record on their first attempts but it was Marc Lieb who had the best time, establishing an average speed of more than 111 mph (179.5 km/h)

As a brief reminder, the 2014 Porsche 918 Spyder is powered by a naturally-aspirated 4.6-liter V8 producing 608 HP (447 kW) transferred to the front wheels through a 7-speed dual-clutch automatic transmission. It works together with two electric motors offering 286 HP (210 kW) resulting in a combined output of 887 HP (652 kW).

Check out the first related link below for further details.