3 Automakers Side With Trump Over Authority On Emissions [UPDATE] 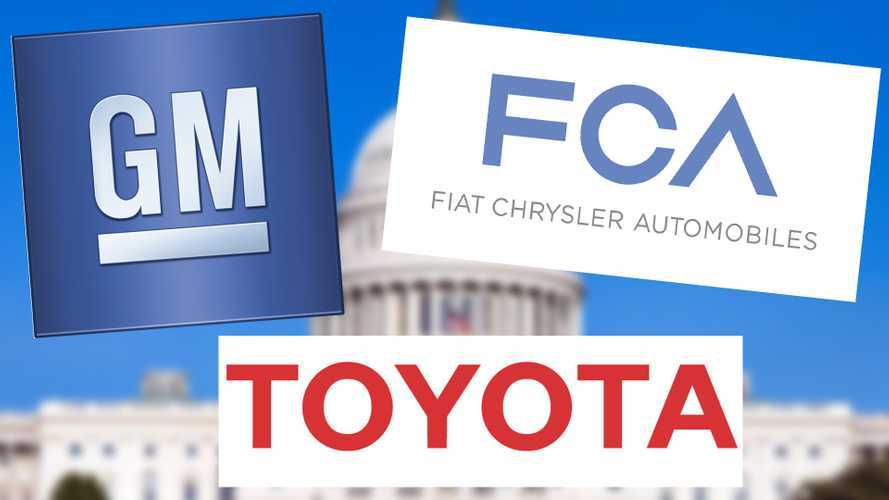 GM, FCA, and Toyota support the establishment of emissions regulations at the federal level.

Representatives for all three automakers directed Motor1.com to a statement released by the newly formed Coalition for Sustainable Automotive Regulation. Only General Motors offered some added information, clarifying that "the Coalition has joined together to seek intervention in the lawsuit with the purpose of seeking one national standard. This is not in regards to the standards themselves and what they maybe [sic] when the final rule is released but about the need for one program."

It should be noted that the release does not clearly define where these automakers stand with regards to emission regulations, and when we pressed the issue, no comment was offered. The release also doesn't specifically mention support for the Trump administration, but it does support a single national standard for emission regulations, which is the position of the current administration.

Here is the full press release from the Coalition for Sustainable Automotive Regulation:

WASHINGTON, DC, Oct. 28, 2019 – The Coalition for Sustainable Automotive Regulation announced that it is seeking to intervene in a lawsuit between California and the federal government, expressing the Coalition’s goal of achieving a unified fuel economy and greenhouse gas (GHG) program.

“The decision to intervene in the lawsuit is about how the standard should be applied, not what the standard should be,” said John Bozzella, president and CEO of Global Automakers and Coalition spokesperson. “By participating we ensure the concerns of consumers, autoworkers, retailers, and manufacturers are heard in this dispute.”

Since 2010, the country’s unified fuel economy and GHG emissions program has improved vehicle efficiency, reduced emissions, and provided regulatory certainty. Recent federal and California rulemakings threaten to upend this balanced approach and create uncertainty for consumers, autoworkers, retailers, and manufacturers. Coalition members had hoped to avoid this outcome and throughout the process urged both the federal and state administrations to maintain a national program.

“The certainty of one national program, with reasonable, achievable standards, is the surest way to reduce emissions in the timeliest manner. We did not ask for, nor did we want, these questions to be decided in the courts, but we hope this pathway leads to a solution amenable to all parties,” said Bozzella. “With our industry facing the possibility of multiple, overlapping and inconsistent standards that drive up costs and penalize consumers, we had an obligation to intervene.”

The world market is shifting to low-carbon transportation, and the United States should continue to be a leader in automotive innovation. One national standard allows for continued investments to be made efficiently to improve environmental quality. This shift needs to be supported by smart environmental regulations that provide the widest range of fuel savings for all consumers without unnecessary costs, help sustain manufacturers’ ongoing product and manufacturing investments, and protect American jobs.

The case, Environmental Defense Fund v. Chao, was filed in the U.S. Court of Appeals for the District of Columbia Circuit.

The current political climate in the United States is a bit tense. By that, we mean it’s akin to a hate-filled family reunion without the family bit, or any sort of reunion-fueled nostalgia. Automakers have been caught in the middle, with four companies having become the subject of a Department of Justice anti-trust investigation over nixing the Trump administration’s rollbacks on emissions. Now, three other automakers have seemingly taken the opposite position, according to a report from The New York Times.

Here's Where It All Started:

The report says that General Motors, Fiat Chrysler Automobiles, and Toyota have landed on the side of the Trump administration with regards to the issue, or at least, the position of where authority lies when it comes to establishing vehicle emission standards. Earlier this year, Ford, BMW, Honda, and Volkswagen took the extraordinary step of making a deal with California for standards stricter than what the Trump administration proposed in its rollback. That prompted an angry response from Trump that ultimately led to the aforementioned anti-trust investigation, not to mention the federal government revoking California’s authority to establish its own standards under the 1970 Clear Air Act.

That action led to a near-immediate lawsuit against the government from nearly half the states in the Union – California included – that is expected to go to the Supreme Court. The showdown will determine whether setting emissions regulations are an issue of state’s rights previously as established in the Clean Air Act, or the sole domain of federal legislation.

With Ford, BMW, Honda, and VW obviously tied with state’s rights, the move by GM, FCA, and Toyota to back federal jurisdiction effectively splits the industry. One thing the report doesn’t specifically address is how these automakers actually feel about the Trump administration’s rollback. Supporting the federal side of the issue implies the automakers also support the rollback, which comes with no small amount of irony considering Toyota has been a hybrid leader in the automotive sector for decades.

Motor1.com has reached out to representatives of each automaker to confirm The New York Times report, and to seek further clarification on the specific position each company has with regards to the proposed rollback.