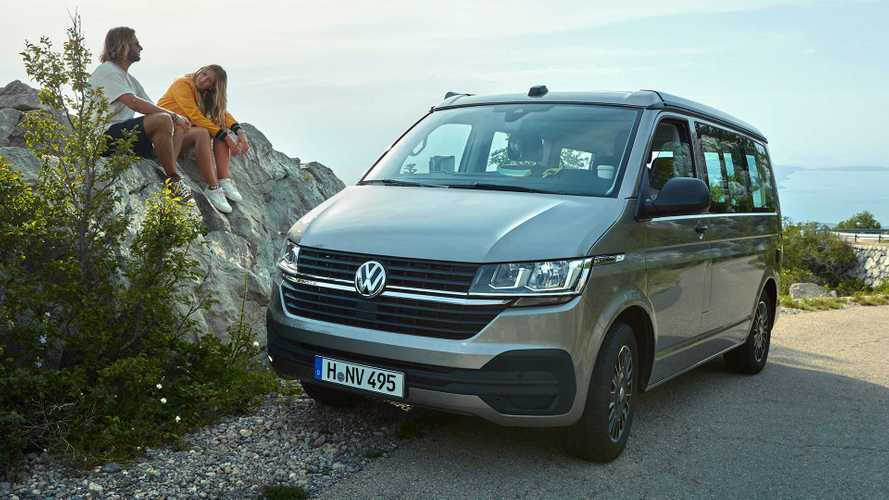 Despite its name, the compact motorhome won't be offered in America.

It’s not a stretch to say Volkswagen started the whole camper van movement with its classic Type 2 way back in the 1950s. Flash forward to 2019 – VW has a new cool mini motorhome that will make its public debut at this year’s 2019 Caravan Salon. Rather, it’s sort of new, as it’s based on the familiar California that already has camping provisions. This one is a bit different, however, in that it gets its own mini-kitchen along with seating for seven.

Officially called the California 6.1, it’s a product of Volkswagen Commercial Vehicles and in ordinary life, it functions as a normal van with seating for up to seven people. However, this 6.1 version offers something new compared to other California campers – the ability to add the mini-kitchen without ditching the extra seating. In that sense, this van becomes a proper family vehicle through the week, with the ability to embrace off-grid life on the weekends.

The mini-kitchen stows behind the driver seat between the B and C pillars, and includes a single gas burner with a small workspace to the right. When not in use, the mini kitchen fits neatly into the van’s wall. In its stowed configuration, it takes up no more passenger space than a standard California without the option. As for other camping items, the California 6.1 features a pop-up aluminum roof with canvas sides, a roof bed, a fold-away table, and the rear bench seat folds to create another sleeping area.

Despite its American-sounding name. VW doesn’t offer the California in the States. It’s presently the exclusive domain of overseas markets, though we suspect there are all kinds of VW camping enthusiasts hoping that it will eventually cross the pond. In the meantime, it will be on display starting August 31 at the 2019 Caravan Salon in Dusseldorf, Germany.

Hannover, 29 August 2019 – Volkswagen Commercial Vehicles is presenting a further surprise as part of the world première of the new California 6.11 at the Caravan Salon in Dusseldorf (31 Aug. to 8 Sept.): for the first time the entry-level Beach version will have a kitchen. Until now this was reserved for the more exclusive Coast and Ocean lines. New this time: unlike the large row of kitchen units in the Coast and Ocean, being used in the Beach is a completely reworked fold-out mini kitchen. While, due to the broader kitchen, the Coast and Ocean are universally offered with a two-seater bench in the passenger compartment, the California Beach 6.1 can, thanks to the narrower mini kitchen, also optionally be ordered with a three-seater bench. That opens up the possibility for the first time for families of five to go camping with a California, complete with kitchen on board.

The new California 6.1 Beach with mini kitchen and motorhome type approval is being given the suffix ‘Camper’; the Beach version with passenger car type approval and no mini kitchen will from now on carry the extra name ‘Tour’. New on the Tour: in future it is getting two sliding doors as standard – on the left and right. Previously the Beach was available with the sliding door on the right only. Both Beach versions – Tour and Camper – are additionally united by the fact that a new digital camper control unit in the roof console adds to the standard specification (for the previous model there was no camper control unit). For the first time it is also possible for both models to order hydraulic operation of the pop-up roof as an option instead of manual operation. In this case, the opening and closing of the roof is controlled, like many other functions, via the camper control unit.

The new mini kitchen broadens the versatility of the California 6.1 Beach. To use it, it is pulled up and out of the side panel between the B- and C-pillar and folded out. The stainless steel unit has a single-hob gas cooker on the left and a worktop on the right. Over the gas cooker there is also a cover plate, which when lifted up for cooking serves as a splashback.

The California 6.1 is generally used in everyday life like any normal MPV. Often by families. There is then sometimes the need to carry more than four or five people. For such situations Volkswagen Commercial Vehicles offers individual seats on the second seating row. Despite the fitted kitchen, the new California 6.1 Beach provides room here to use not just one, but two individual seats. With the mini kitchen closed, the bench seat and individual seats can be repositioned without any restrictions at all. Depending on bench seat version on the third row, the camper thus becomes a six- or seven-seat MPV. Note, however, that any Beach with type approval as a motorhome has a maximum of five seats. Anyone wanting to use the Beach with mini kitchen and six or seven seats should therefore simply order it as the Tour version with passenger car type approval rather than as the Camper, choose not to have the left sliding door and add the mini kitchen. The compact design of the variable kitchen underlines the fact that the California 6.1 is more than ever the true all-rounder in the compact motorhome market.