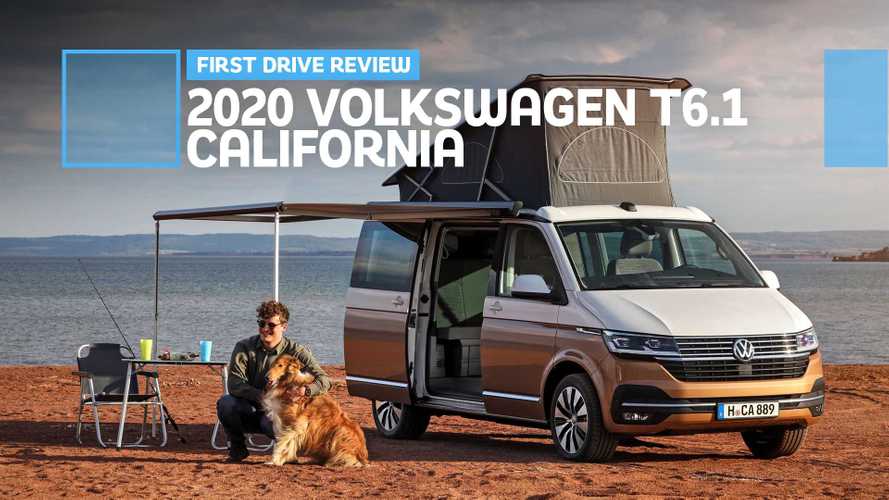 Dear Europe, we hate you for being able to buy this when we can’t.

No, it isn’t electric. No, it isn’t available here. And no, it isn’t cheap. Now that we’ve answered the three biggest questions asked by roadside onlookers, a final introductory point on the Volkswagen T6.1 California Camper: It rules. If we could federalize one European-market vehicle for the United States, it would undoubtedly be the plucky reincarnation of VW’s iconic pop-top camper van.

This position crystalized over three days in Nova Scotia, Canada with the California camper. Truth be told, though, I was already sold when I saw the rockin’ two-tone van waiting outside of Halifax Airport. With new headlights and an updated bumper design for 2020, the restyled California is the best of VW’s modern, clean aesthetic with a classic paint job that reminds you of the folky, California-cruising vibe of the Microbus and Westfalia campers.

But this one has come a long way from the spartan old days. At the airport, we got a quick tour of the facilities. “Quick” still means about 20 minutes, as the van’s feature set is seemingly infinite. There’s a new-for-2020 touchscreen control panel that controls the electro-mechanical pop-up roof, an auxiliary diesel-powered heater, cabin lighting, a refrigerator, and some other useful gadgets like a timer and alarm clock.

In addition to the fridge, you also get a set of stove-top burners with integrated propane storage in the rear to power them. Wrapped around that propane tank is a water tank, which runs the fully operational sink in the cabin and the cold-water shower out back. There are also two deployable tables, an awning, a rear bench that becomes a bed and a bed up in the tent that can be moved out of the way to provide more headroom inside. Point being, when VW calls this a “Camper,” the company means it.

Seeing one – with its German front plate and European side reflectors – is a hilarious novelty. Seeing a dozen lined up in a parking lot feels like a coordinated effort to stoke our jealousy.

This is the second year in a row that VW has taunted the North American automotive press by bringing the California to markets where it isn’t sold, but make no mistake, this is no broad campaign to build up demand for the vans here through tantalizing media events. The Camper isn’t coming to our shores. End of discussion. This event is catered to German journalists; we’re just here because someone canceled at the last minute.

So the first stop outside of Halifax was a grocery store, to procure road snacks and gawk at the North American-style megastore. But while the Germans were absorbing aisles full of Cheez-Whiz and Carrot Cake Oreos, local Canadians slowed their stride through the parking lot in order to admire the gold-and-white pop-tops. Waves, stares, and thumbs-ups were common on the road.

The Camper isn’t coming to our shores. End of discussion.

After the grocery stop, we set off with the one other American journalist toward Nova Scotia’s Western coast. On the way there, we encountered stunning cliffs and winding backroads. The van, despite its 6,000-pound heft, was composed and stable through high-speed bends and mid-corner bumps.

In fact, with communicative steering and such a forward driving position, it’s easy to get overconfident in the California. It’s so solid and Golf-like in its cruising that you might forget about the small apartment building butting up against the rear of your seat. But as the back leans in, you’ll realize that you’re probably moving faster than anything with wood flooring has a right to.

Living On The Road

That’s partially a result of the torquey, turbocharged 2.0-liter engine and the seven-speed dual-clutch automatic transmission’s fantastic ability to keep it in the right gear. Acceleration isn’t fast by any means, but with 201 horsepower, it’s not so slow as to be a burden. On two-lane roads around the island, it was more than quick enough to enable our frequent passing maneuvers.

We reached the oceanside camp, deployed the roof, and converted the rear bench into a bed. The whole process took five minutes, max. Now we had room to sleep four individuals in two approximately queen-sized beds, which is exactly how many people you can legally carry in the California anyway. We then removed the hidden table from the sliding door and the two folding chairs from the special compartment in the tailgate to set up for dinner.

The camper display noted that its two batteries would be able to keep the heater fan, lights, USB ports, and refrigerator running for 37 hours.

When it was time to go to bed, we were thankful for the powerful auxiliary heater in the California. It was about 45 degrees Fahrenheit by the sea, so the toasty respite of the Camper returned feeling to my toes. The camper display helpfully noted that – with the heater fan, lights, USB ports, and refrigerator all sucking power – its two batteries would be able to keep everything running for 37 hours before we had to turn on the engine. And if you drain the two batteries, don’t worry. The engine, radio, and front 12-volt outlet have their own battery that no amount of refrigeration can affect.

The built-in alarm clock can use the cabin lights to gradually wake you up, mimicking a sunrise. But since breakfast started at 7:00 am and the sun rose at 7:09 am, we opted to keep the rear blinds open and catch the actual sunrise over the water. Light gimmicks are cool, but these vehicles are about getting out to see nature.

The second day was more hooning on coastal roads, with stunning vistas all around. Our top-trim California Camper Ocean model has an adaptive suspension, which means this 6,000-pound van has a Sport mode. More importantly, it also has a Comfort mode. The setting’s softer damping proved extra useful, as an open schedule gave us the chance to explore lots of gravel backroads, trot down an abandoned and stripped railway, and even do some minor grassy exploration off pavement. Despite not having the optional all-wheel-drive system, our California always felt sure-footed. Admittedly, we weren’t pushing it too hard.

The pop-top was also extremely comfortable for a long trip. It has Volkswagen Digital Cockpit, a 12.3-inch digital instrument cluster, though we couldn’t see the full glory of the full-screen map display since these Euro-market vans don’t have map data for Nova Scotia. We also had adaptive cruise control, lane-keeping assist, Apple CarPlay, heated seats, a heated windshield, and an automated parking system. But all of that and a furnished apartment doesn’t come cheap. The Ocean trim starts at €65,300 Optioned out, our tester was about €90,000. By direct conversion – that is, not factoring different tax and import duties – it’d be about $99,000 at today’s exchange rates.

Put another way: This is the most expensive hotel room I’ve ever stayed in. But at the second camp, the view certainly seemed worth it. We watched the sun set over a small lake tucked back near New Germany, Nova Scotia and relaxed by a campfire as the light faded. Best of all, for the second night in a row, you could see the Milky Way with the naked eye. We’ve scoped out some pretty swanky hotels, but none can match that view.

Would It Work In America?

So the question has to be whether or not the California is worth it. And, well, it’s hard to say anything but, “yes.” First off, the base California Beach camper starts around $45,000, so you can get most of the experience without our Ocean’s $71,000 starting price or its $99,000 as-tested price. Second, you’re getting essentially two distinct, refined experiences in one vehicle.

The tidy European van never felt too big for truck-lined North American streets and garages, while our fuel economy averaged nearly 30 miles per gallon thanks to the efficient 2.0-liter engine. Combined with seating for four, lots of tech features, a great ride, good power, and ample cargo room, it isn’t hard to imagine using this as your daily driver.

And yet, on the weekends, it offers a total turn-key package that can take you off the grid in a moment’s notice. This isn’t an upfitter cutting cabinets for a Ford Transit, this is a factory-built Volkswagen Commercial product that sold 18,000 units last year. That’s more sales than any other camper-van sold in Europe.

After a weekend with it, it’s really not hard to see why. Here’s to hoping that the forthcoming I.D. Buzz electric microbus revival will give VW another chance to sell one of its brilliant camper vans stateside.