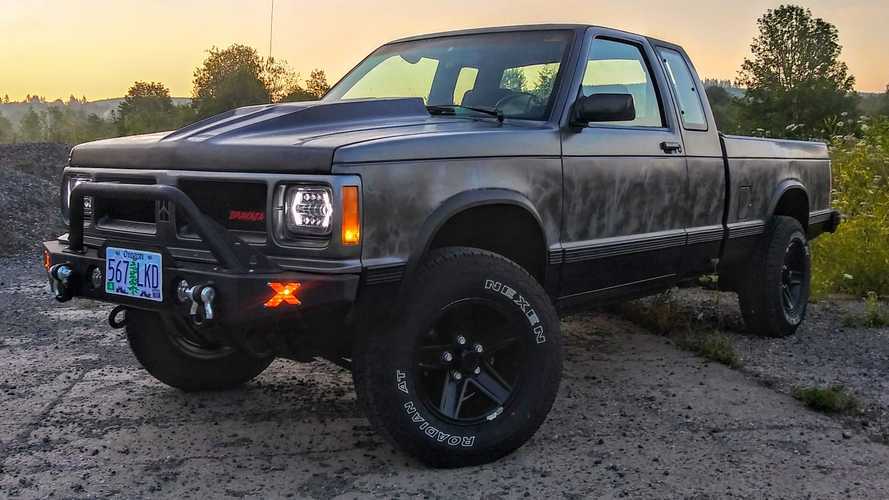 How did GM not build this truck back in the day?

Attend pretty much any car show – even those of the small hometown variety – and you’ll see beautiful classics restored with no small amount of effort and creativity. Usually, such creations are relegated to popular hot-rodding machines like muscle cars, vintage iron from the '50s and '60, or late-model performance cars built to be track monsters. What you don’t see is a 1991 Chevrolet S10 compact pickup turned into a compact Oldsmobile pickup. And that, friends, is exactly why you’re seeing it right now on Motor1.com.

Say hello to Michael Hill and his Radwood-ready 1991 Chevrolet Oldsmobile pickup affectionately called the Bravaja. Oldsmobile never built a compact pickup truck you say? You’re absolutely right, but back in the 1990s Oldsmobile did offer a badge-engineered version of the S10 Blazer SUV called the Bravada. It was basically the luxury doppelganger to Chevy’s small workhorse, and since everything was the same underneath, adapting Olds parts to the Chevrolet model isn't tough.

We spotted this truck in a Facebook group called Malaise Motors, a glorious shrine to unloved rides from 1972 through 1995. It’s a closed group so we can’t share the actual post here, but we did reach out to Hill who graciously sent us a range of sweet photos while answering all our fanboy questions. He bought the truck just a few months ago; it was a cool find in the S10 world, being an extended cab 4x4 with the 4.3-liter V6 and a five-speed manual transmission. It also had a hard-to-find digital dash and a factory sunroof – all of which lends well to creating a what-if Oldsmobile pickup.

He dove into required maintenance, and we all know where that leads. He swapped in the Bravada grille – a mod that’s apparently fairly common in the S10 world – but in a message to Motor1.com he admits to not really knowing why he took the conversion further. All we can say is we’re so glad he did, and we’re even happier he snapped photos during the process.

Bravada seats and mirrors are now installed, with Bravada taillights soon to come. In addition to the conversion, Hill also added refinished five-spoke wheels from a third-generation Chevrolet Camaro. They mount to a suspension that features a small two-inch lift, and for the Jeep fans, this truck has a bit of Wrangler DNA as well. The headlights, fog lights, and front bumper all come from the famous off-roader.

As for the truck’s name, once Hill completed the lift and the cool camo paint scheme, he reckoned it looked like an S10 Baja truck. A friend with a 3D printer created the badge in the grille, and just like that, the Bravaja was born. Well, over the span of four months anyway.

Honestly, this ride probably won’t stand out at car shows, but it should. During the height of GM’s badge-engineering days, we reckon such a truck was at least on the drawing board somewhere in the automaker’s headquarters. Major props to Hill for building the Bravaja and showing us what such a machine might have looked like.