Ferrari 812 Spider To Debut In September?

Some Ferrari owners are receiving invitations to upcoming events to see the car.

The Ferrari 812 Superfast Spider could make a debut soon because members of the Ferrari Chat forum are receiving invitations to see the machine in early September. Based on the invites, there are events to see the grand touring convertible on September 2 and 8. So far, no one from the United States has a chance to check out the droptop model, which suggests the American premiere might be later. 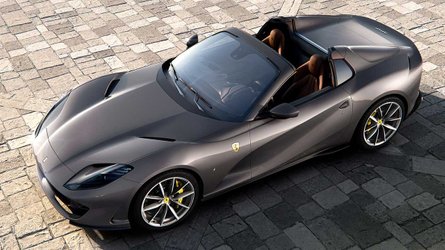 Official details about the Ferrari 812 Superfast Spider are nonexistent at this point. However, a rumor from November 2018 indicates the model uses a folding hardtop.

Showing the 812 Superfast Spider to so many people at private events could be a hint that the model's production might be higher than the F12berlinetta-based F60America's ultra-limited run of just 10 units in the United States.

Ferrari already uses the 812 Superfast's underpinnings for creating the Monza SP1 and SP2 speedsters. They pack a version of the 6.5-liter V12 producing 809 hp (603 kW) that allows for a run to 62 mph (100 kph) in 2.9 seconds. The new 812 Spider will be a bit more driver friendly by offering an actual roof that a person will be able to deploy in case of bad weather.