Camp365 Is A Pop-Up Cabin That's Towable By A Prius 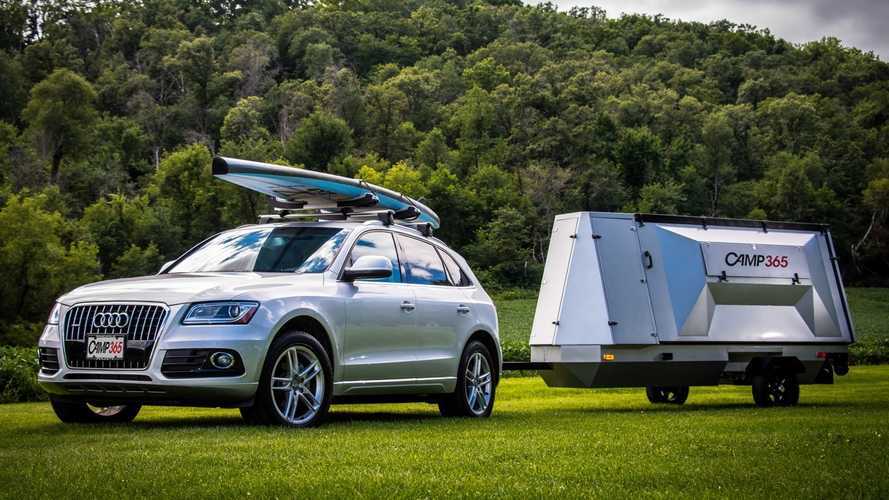 When space is at a premium, this fold-out camper transforms into a premium space.

There's something about the perceived freedom afforded by camping that appeals to almost all of us on a very base level. In office blocks all over America, cube-dwelling drones, lit by artificial, fluorescent light, are staring longingly at converted camper vans on their computer screens, desperate for an escape from their insect-like existence.

The sad truth for many city-dwellers is that the prospect of trading their compact commuter car in for a camper van is not only impractical, it's well outside of the realm of affordability. Pop-up campers remain a no-go due to their large footprint – as well as a heft that proves too substantial for most cars to effectively and safely tow. Enter Camp365.

Camp365 is a new way to look at the tow-behind pop-up camper concept. Unlike the wide, rectangular box-on-a-trailer rotting in your uncle's side yard, the Camp365 folds out like origami, from a small, narrow trailer, barely wider than a full-dresser touring motorcycle.

Once unfolded, the Camp365 affords an incredibly spacious interior larger than not only most camping tents but seemingly larger than more traditional pop-up campers. Their slogan, "the cabin that goes everywhere," seems appropriate. When unfolded a chock full of amenities, there's still plenty of space for two people or more to sprawl out, one in the bed and another in a sleeping bag on the floor.

Regardless of the physical footprint of the Camp365, all that clever engineering and all of the top-quality materials don't come cheap, with prices starting around $20,000. Still, for city dwellers with a wanderlust, having a place to store or park a full-fledged camper van or trailer might be around the cost of rent in the suburbs. For those people, a small, lightweight camper is worth every penny.