2020 Ford Escape Spied Inside And Out, Hybrid Confirmed 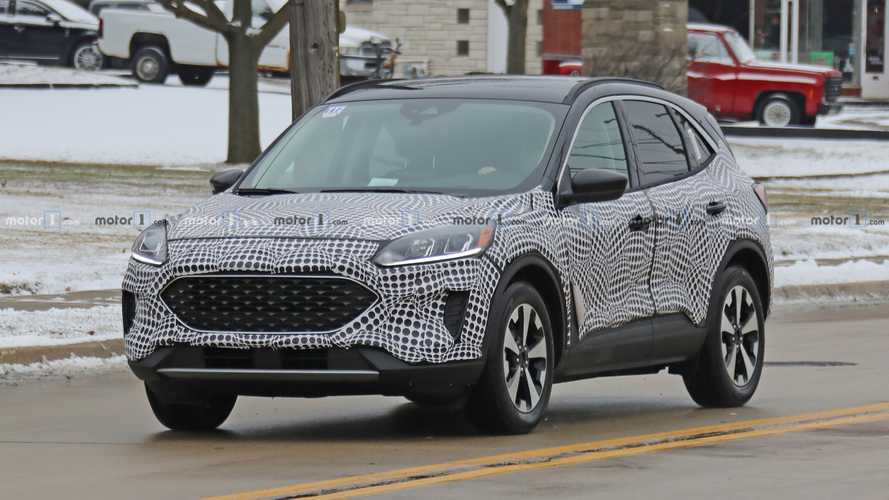 A good look inside the compact SUV shows a kilowatt gauge.

We have some electrifying news in the world of small SUVs with Blue Oval badges. Spy photographers caught another 2020 Ford Escape testing on the street, and as with our sighting last month, it was only wearing thin camo wrap on the outside. The roof, beltline, and side pillars are fully visible, as are the lower rockers on the sides and the rear fascia. Up front, the grille and headlights are exposed, showing what could be the happiest little SUV on the planet.

There is something different about this test vehicle, however. There are no obvious signs on the outside, but this Escape is actually a hybrid. Our daring photographer managed to get up close for a few quick photos of the interior, and the kilowatt gauge is a dead giveaway. We’ve expected the hybrid model’s return for some time now, but this close-up look is our first confirmation that it actually exists. Details of the system aren’t yet known, though it's believed a standard hybrid and plug-in model will eventually be offered.

The new Escape (Kuga for markets outside North America) should supplement the hybrid powertrain with a pair of gasoline engines, namely Ford’s small EcoBoost three-cylinder turbo and the familiar 2.0-liter EcoBoost four-cylinder. In Europe, the three-pot should be good for 180 horsepower (134 kilowatts); the 2.0-liter four in the current Escape makes 245 hp (183 kW). Both mills are expected to use a new nine-speed automatic gearbox.

This look inside as well as the visible shapes outside show considerable resemblance to the Focus Active wagon, a vehicle that was once slated to reach the U.S. but has since been dropped along with the standard Focus. The new Escape will attempt to fill the void in the compact segment, and it should debut later this year as a 2020 model.