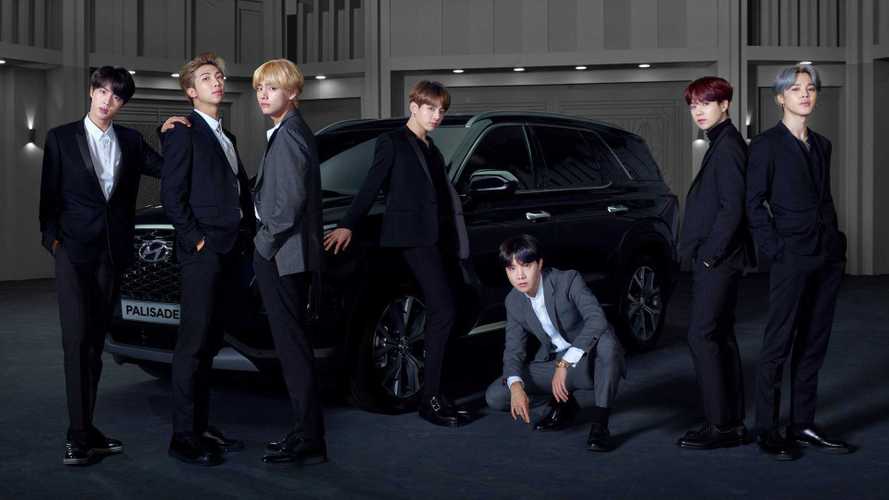 Catch it at the L.A. Auto Show later this month.

[UPDATE November 28]: Hyundai has released one last teaser ahead of the three-row SUV's debut later today. The image shows the Palisade together with seven people - the number of passengers it will be able to accommodate.

Hyundai has kept quiet, for the most part, about its upcoming three-row SUV. Outside of a few spy photos and some light teasers, we don't know much about it. But today we get our first glimpse at the flagship – and more importantly, we learn its name.

Confirming early patent filings, Hyundai is dubbing its new SUV the Palisade. The name translates literally to “a series of coastal cliffs,” but pays homage to Pacific Palisade in California. No doubt that Southern California will be a big market for the three-row SUV when it debuts.

The eight-passenger Palisade shares its platform with the equally large Kia Telluride, which made its debut at New York Fashion Week and followed up with a series of concepts at SEMA. Even though it's a brand-new platform, we don't expect a ton of changes for the Palisade visually; it will essentially be a three-row version of the current Santa Fe with square driving lamps, a large Hyundai signature grille, and a profile almost identical to the smaller Santa Fe, apart from an extended rear.

Even with its size, the Palisade will likely still offer front-wheel drive standard, with an option for all-wheel drive. Rumor has it that Hyundai will shoehorn in a 3.3-liter V6 with 290 horsepower (216 kilowatts) under the hood, and a hybrid 3.5-liter V6 with a total output of 400 hp (298 kW) will join the range later on.

Hyundai today announced the name of its new 2020 flagship SUV: Hyundai Palisade. The new SUV name references a series of coastal cliffs and might naturally be associated by many with the Pacific Palisades, an affluent and beautiful neighborhood in Southern California.

The future Palisade SUV will convey a bold exterior that commands attention and has strong inherent imagery of safety and security, especially important with parents with growing families and active lifestyles. Palisade styling will offer dignity with style in an understated theme that demonstrates clear differentiation worthy of a flagship SUV. Global media will see the Palisade for the first time at the Los Angeles Auto Show on November 28. The Palisade will begin U.S. market availability in the summer of 2019.

Pacific Palisades is home to a collection of mid-century modern masterpiece homes by architects such as Cliff May, Richard Netra, Charles and Ray Eames, and Eero Saarinen. The region boasts of cool sea breezes, easy access to the beach, and spectacular sunsets. It also offers outdoor access of various kinds via three large parks and hiking and biking paths.