Putin travels in style to start his latest term as Russia's premier.

During his inauguration for a new term leading Russia, Vladimir Putin took the opportunity to reveal his new official limousine. It's a gargantuan machine that looks like the result of a tryst between a Mercedes-Benz S-Class and a Rolls-Royce Phantom.

Putin's limo goes under the codename Kortezh, which translates directly to cortege – meaning entourage or procession. The front end features a huge, chrome grille with vertical slats that accentuate the vehicle's size. The rectangular headlights evoke the Chrysler 300. At the back, the rear glass flows back to a long tail, and the taillights take cues from the S-Class.

Technical info about the Kortezh remains very scant. The limo allegedly uses a turbocharged V12 with 850 horsepower (634 kilowatts) that comes from assistance from Porsche Engineering and a Russian-designed nine-speed automatic gearbox. Presumably there is a bevy of communication and security technology underneath the skin, including lots armor. 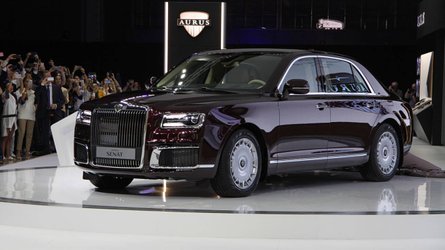 Putin allegedly worked closely on the limo's development, including test driving some of the prototypes. The country intends to use the big vehicle's engineering as the starting point for a minivan, SUV, and smaller sedan. Production of all of these variants would total 5,000 units. The vast majority would be for Russian government offices and security services. However, a few would reportedly be available to ultra-wealthy Russian consumers, too.

Meanwhile, Donald Trump has his own new presidential limo (gallery above) on the way. While it looks like a Cadillac on the outside, a General Motors' heavy-duty truck frame in allegedly underneath. The strong underpinnings allow for fitting tons of armor and bullet-resistant glass that contribute to the vehicle's heavy weight that's reportedly 15,000 to 20,000 pounds.